I thought I was done with the topic of Serena Williams’ disgusting-ness for now, but, as someone who’s watched every second of this year’s Wimbledon coverage so far, I’m getting increasingly upset with not just Serena, but everyone at ESPN. They’re sweeping the whole latest controversy under the rug, and I think that’s because she’s basically the only good American tennis player left in the game nowadays. (If you missed it, you can read my original thoughts on the whole debacle here: www.itsnotaboutme.tv/news/2013/06/24/sports-wimbledon-2013-begins-today.)

But, if any other player had said that the Steubenville, Ohio teen-age rape victim was “lucky,” they would have raked her over the coals! [Note: for those of you who don’t know about it, these are her exact words, as reported in Rolling Stone magazine: “She shouldn’t have put herself in that position.” She added, “She’s 16–why was she that drunk where she doesn’t remember? It could have been much worse. She’s lucky. Obviously, I don’t know, maybe she wasn’t a virgin, but she shouldn’t have put herself in that position, unless they slipped her something, then that’s different.” Lovely woman, eh?]

But the ESPN commentators haven’t even mentioned it! All they’ve talked about is the other controversial part of the magazine article, the part where Serena totally disses her on-court, and off-court love, rival, Maria Sharapova!

So, let me count the ways that I loathe this awful, awful woman:

The rape victim comments are self-explanatory, so if anyone sticks-up for Serena, something’s wrong with them, too. (I’m sure the rapists agree with her! Great company to be in, eh?) 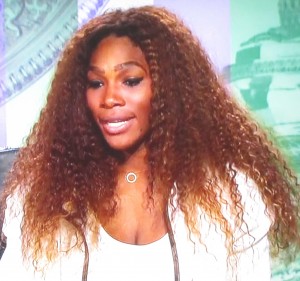 So, let’s discuss the Maria portion of the article. This is Serena’s statement about a fellow player, who everyone knows is Maria: “She begins every interview with `I’m so happy. I’m so lucky’ – it’s so boring. She’s still not going to be invited to the cool parties. And, hey, if she wants to be with the guy with a black heart, go for it.”

Well, first of all, the guy she references is Grigor Dmitrov, Maria’s current boyfriend and an ex of Serena’s. And perhaps he does have a black heart, if he dated Serena!!! That may be the only honest thing she’s ever said!

And, she thinks that Maria’s not invited to the cool parties??? She is the cool party!!! Even though I’ve never been a fan of Maria, either, I recognize what a star she is, including outside of the tennis world. Hey Serena–jealous much? I think so, because Maria is known for her beauty, sex appeal, clothing and candy lines, and is also a fashion icon. Serena’s just known for her tennis abilities and horrible, bullying behavior. (Remember when she threatened to shove the ball down a lineswoman’s throat?) Which female would you rather be???

In her pre-tournament press conference, Serena said, “I personally talked to Maria.” How else can you talk to someone other than personally??? What an idiot. And she thinks she’s fooling everyone! She said she told Maria, “Look, I want to personally apologize to you if you’re offended by being *bought into my situation.” That’s no apology at all!!! She’s saying she’s sorry if Maria’s offended, not that she said it! In front of a reporter, who she had to know would print it! Or she’s even more ignorant than I thought! [*I guess she doesn’t know the word is “brought,” not “bought.”]

She did the same non-apology about the teen-ager she maligned, and now she’s trying to make like they’re good friends. I have a feeling she made some kind-of deal with the girl and her family to not sue her for what she said. Or something like that. She said she’s starting a foundation or something to increase awareness that victims are not responsible for their own rape! How about just teach herself that!!! The rest of the world already knows it! I really think that setting-up some foundation or whatever was a condition of the girl’s family not pursuing something against Serena. Obviously, I don’t know, but it seems to me that something like that took place for the topic to be going away so quickly.

So now Serena was trying to be all sweet to her first round opponent. How phony. That will all change when she meets someone of significance, one who has her number.

And what’s up with the fake semi English accent? Has she been hanging out with Madonna? Or Oprah? She thinks she’s fooling people with the creepy way she speaks at press conferences, or as a guest on the TV sets. Which brings us to the next reason I can’t stand her.

In her attempt to fool people into thinking she’s speaking so well, she shows her true nature by constantly mis-speaking. Within a couple of sentences, she said “ekspecially,” instead of “especially,” and “tooken” in place of either “took” or “taken.” And she did it all with the above-mentioned pseudo English accent.

And, on the ESPN set for an interview with Mary Jo Fernandez, she called her just “Mary,” which nobody does! It’s Mary Jo! Period. It shows Serena’s haughtiness and a lack of respect for the exact commentators who are stupidly sticking-up for her!

Being shallow, I have to comment on Serena’s new look, which I wouldn’t do if she didn’t act like she’s so gorgeous when she’s really a mess. Has anyone else noticed that she’s beginning to look like Jocelyn Wildenstein, that woman the press calls the Cat Woman because of her extensive plastic surgery? I’m all for improving one’s looks, and her new nose job is for sure a step up. But what is up with those brows??? They look like plastic Groucho ones! Maybe they’re those cosmetic tattoos. Either way, they look downright strange. And what is her competition hair doing??? Is that “style” to distract her opponents? I know it would me.

I don’t know if they’re bound by ESPN to not say what they really think of Serena Williams, but I’m floored that they haven’t even mentioned her rape comments, (except to point out that she’s now pals with the rape victim, which I don’t buy for one second.) And they’re playing-up the thing with Sharapova as a “cat fight.” And some of them blame Maria for reacting to Serena’s meanness towards her! Maria just pointed-out that Serena should stick to discussing tennis, and said that if she wants to talk about something personal, how about talking about your own married-with-children boyfriend!!! You go, girl! I love that she did that! Everyone pussy-foots around Serena all the time because they know they’ll be accused of racism is they criticize her. But her unpopularity has nothing to do with race whatsoever, so more people have to come out against her recent, if not past, behavior.

I wish I had the time to research what other’s countries’ pundits are saying about Serena’s Rolling Stone interview. I’m sure many of them have some harsh words for her. At least the honest people should.

But I must give some props to Chris Evert because she at least semi-blamed Serena for the recent dust-up with Maria. But boo to the often-creepy Pam Shriver for blaming Maria. How any female could even think that is beyond me.

And what’s wrong with Mary Jo Fernandez?? She actually had the nerve to say of the Maria-bashing, “It’s taken its toll on Serena. She’s faced it. She’s dealing with it, but that’s the last thing you want before coming into a major champ, all this distraction.” What??? Serena’s the one who not only started it, but kept it going by not even acknowledging what she did!!!

Where’s Martina Navratilova when you need her? I’m sure she would have something juicy to say about it, and would really breakdown the blame for Serena. [Note: perhaps she did, on the Tennis Channel coverage. But my DVR erased it before I got to view it.]

I hate that anyone’s faulting Maria--she didn’t start it! She just responded by pointing out just who Serena really is.

I’ve never been a Maria fan, but I’m in her corner on this one. And for the idiot haters who want to say something nasty to me for being against Serena, let me tell them right now that I actually rooted for her (the only time I ever made that mistake,) against Maria in the 2004 Wimbledon final. But, since then, I can’t be like the jingoistic ESPN-ers and turn a blind eye to such thuggish behavior.

And lastly, I must agree with the public calls for Serena’s sponsors to drop her! But we all know that they won’t.