So, this year’s Wimbledon tennis tournament was different!  The ladies’ side was a total surprise at the end, and the men’s was half and half. And it was the all historic!  If you didn’t watch it, especially the final two days, you really missed something this year.  Even Mr. X got into it! 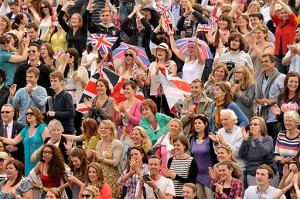 Just a smidgeon of the pro-Andy Murray crowd!

As you know, I’m basically crushed that Roger Federer went out so early in the tournament, but that did leave me free to fret over the fate of others.

So, first let me congratulate new champions, Marion Bartoli and…Andy Murray, who’s achievement is gargantuan!!!  And, of course, men’s doubles champs once again, America’s own Bryan Brothers. (Actually, Bryan twins.) It’s a big deal that they won this one because now they hold all four Major Championships, and the Olympic Gold Meal, at the same time! For non-aficionados, I cannot even begin to explain just how amazing that is!!!

And, of course, I must add my random end-of-tourney thoughts.  So, here they are: 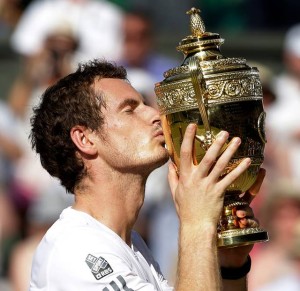 – I absolutely cannot believe that Andy Murray really won! It was heroic on his part. What mental fortitude that guy has now. The pressure on him from Great Britain to win “their” championship was beyond enormous. We have nothing even approaching it in this country, so it’s hard for most people to comprehend. He’s the first Brit (who’s Scottish, not English, by the way,) to win the “gentlemen’s title” in seventy-seven years!!! The whole country stood still to watch his Finals match.

– I hope that William and Catherine name their baby (who’s due any day now) Andy, no matter which gender it is. Or maybe it can have Murray as the middle name, at least. I guarantee you that there will be a rash of kids with those names born this year in Great Britain. Even I would name my kid that, if I were having one. I may change Mr. X’s moniker to it!

– Novak Djokovic was as classy in defeat as I knew he’d be. I really do think that even he is thrilled for Andy!

– I’m so sick of the biased ESPN commentators saying how wonderful English girl Laura Robson is.  Idiotic Pam Shriver even went so far as to say that Laura’s “charismatic!”  (Except, Pam, of course, who mis-speaks all the time, mispronounced it as “churismatic.”  Ugh.)  Laura may be a nice girl, but she’s far from having charisma.  Or anything resembling it.  She’s basically dull as dirt.  And has only one blank facial expression at all times. The staid eighty-seven-year-old Queen of England is more exciting!!!

– All sports commentators seem to think that success of Canadian/English athletes is tantamount to American success.  For example, in 2002, when the Canadian figure skating pair of Sale and Pelletier was awarded an extra gold medal in the Olympics, (in addition to the one the Russians already won,) the announcers here in the US kept claiming the win for “North America,” rather than Canada. And that’s what the ESPN crew seemed to do with the success of Brit, Andy Murray. The US had neither men nor women left after the quarter finals, so they had to glom on to the English folk. Shame.

— Did anyone else notice that Fernando Verdasco’s hair never moved? At all!!! Everyone else had disgusting hair after hitting a few balls, but his stayed right in place, even through five grueling sets. He deserved a special trophy for that accomplishment!

— I’m so glad for the three Polish players who got into the semis. It’s always good to see a new country get into the Major mix. 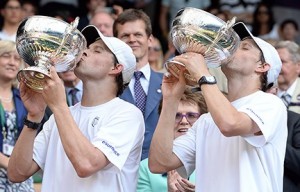 – It was a weird championship for me because I actually liked all eight singles semi-finalists! (On both sides—that’s why eight, rather than four.) I usually dislike at least one female, (read: either Williams sister,) and never like any guy who plays against Roger. But this year , I really didn’t know for whom to root! (No worries there, though—I chose Marion Bartoli before the semis, and Andy Murray all along, as long as he didn’t play against Roger. So, I was two for two!)

– I had no idea Juan del Potro was so funny!

– Quarterfinalist Li Na, from China, did great. I can’t believe that she missed making the semis by one bad call, that she chose not to challenge. How does one rise about that??? 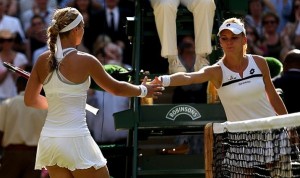 – I could not have been more disappointed in Aga Radwanska’s disingenuous handshake with Sabine Lisiki after the latter beat her in the semis. I became a fan of Aga this tourney, not only because of her surprisingly interesting play on the court, but also because she cared enough about her looks and presentation to wear good eye make-up on the court. I mean it! She also has the exact perfect body I’d love to have (and did, back in the day!,) and she wore the cutest tennis dress. (I have told you before that I’m shallow, correct?) I know how disappointed she was to lose such a close semi, and trust me, being the Empath that I am, I feel her pain. But she should have at least faked better sportsmanship.

— Every single sportscaster totally ignored the fact that Aga was supposed to be in the semis, as the number four seed! They kept lumping her in with the other surprises! How rude of them! 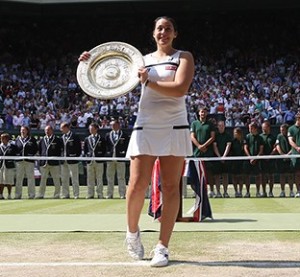 — And the nutty panel on ESPN kept saying that everything is going to change for the new Ladies Champion. Do they mean how it did for Petra Kvitova??? Who, you may ask?? My point exactly. She’s the champ from 2011, and no one outside of us tennis fans have ever heard of her. And we barely remember she won just two years ago!!! It took years for anyone to recognize Maria Sharapova at the beginning, and even then that was just because of the fact that she was good-looking. And a teenager!!!

– As much as I can’t stand Serena, and I’m thrilled when she’s defeated, I realized that it makes it easier to have someone to root against. I like all four women who made the semis here.

– I don’t think I’ve ever seen a more dramatic, compelling semi-final than Novak Djokovic and Juan del Potro.  And I didn’t even have a horse in the race!

Okay, I’m really exhausted from the past fortnight of just about twelve hours of tennis a day, especially a tournament with so much drama. So, as the Wimbledon denizens might say, ta-ta for now!