Okay, I lied when I used the word “final” in the title of what I thought last week was my last column on this summer’s Olympics. But by accident, not on purpose. I really thought that I had written my last thought on the topic.

But one more thing occurred to me, (especially with my mind on even more sports now because of the US Open,) and I just had to share it.

I considered sneaking it into that former “final” column about the Olympics, but it was already published and I felt that that would somehow be cheating. (You can read that last one here if you missed it: www.itsnotaboutme.tv/news/2012/08/20/sportskarens-rants-final-thoughts-on-the-2012-olympics) Whom it would be cheating I’m not sure, but perhaps the readers who already read that last rant before I would have entered this new information. 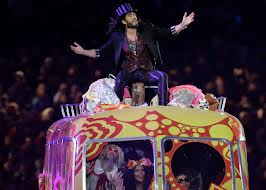 So, here it is, my final final thought on this years’ Olympics. It’s on the inane closing ceremony. Ready?:

It was so bad, (how bad, you ask?,) that I was actually thrilled to see Russell Brand arrive! Seriously. That’s a feeling I had never before experienced. (And now Katy Perry feels like I always do.)

The producers of the closing show kept having non-stars show up to perform the hits of other people. (Like some red-headed dude singing The Who’s songs.) So, when I heard the first strains of Pure Imagination, from my beloved Willy Wonka and The Chocolate Factory, I was wondering why they would have American Gene Wilder in the show. And, I knew it wasn’t Gene’s heartwarming voice.

So, we assumed it was yet another anonymous booking. I jokingly said to Mr. X, “It’s Russell Brand,” because we always say that someone is someone famous when they look a little like them. (It’s a better routine in person than in print, I promise.) And then, lo and behold, it was Russell Brand! And our waning interest slightly picked-up.

So, there you have it; nothing earth-shattering, and definitely not a note worthy of it’s own column. But I just had to get this thought in somehow, or it would have bothered me in perpetuity.