While I do congratulate the Miami Heat on their victory, I’m way too busted up over the Spurs’ loss to write too much on the subject. But some kind pals keep checking in to see if I’m okay over it, so I figured I’d better weigh-in on the NBA Finals.

So, these are my (mostly) quick, not-perfectly-written thoughts that came to me while I was crying during the post-game coverage. (I’ve expanded on a few of them, now that I’ve calmed down a bit.)

As sick as I am for the Spurs, being a true sports fan, I must say that this was the greatest NBA finals ever. At least that I’ve witnessed in my lifetime. I’m sure I’m not alone in my assessment. But I feel that will be little comfort for the Spurs. Or me!

The Heat winning isn’t the painful thing, like it always was for me when the Lakers or Pistons won;  the pain is from knowing the Spurs were twenty-one seconds away from winning the title in Game 6.

Being the Empath that I am, I’m feeling so much pain for all of the San Antonio Spurs, but especially Tim Duncan. He said that the basket that he missed near the end of last night’s Game 7, that would have tied the game up, will stay with him for a long time. I know the feeling. I always think that I’m the only one who can’t get over things, and in this case, I wish I was. I feel absolutely awful for him, even though the last two losses were a team thing, (as all basketball results are.) 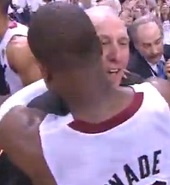 You know who cheered me up? Spurs coach Gregg Popovich!  He handled the devastating loss better than anyone I’ve ever seen in any sport ever! He was genuinely happy for LeBron James and Dwayne Wade.  What a classy man!  And what great sportsmanship shown by the entire Spurs franchise in defeat.

Actually, I was pleased to see that even the usually obnoxious Heat players were pretty classy at the end. I think they were humbled by the scare of being down three games to two and being twenty-one seconds from losing the series the game before, which veteran Ray Allen won for them. (I think Ray may have still been ticked-off from losing his Finals three-point record to the young Spur, Danny Green, the game before and wanted to say, “Watch this, young fella–I make them when they count!)

Speaking of Game 6, it truly showed that, in sports, nothing is ever over until it’s over.

I’m sick for the Spurs.  I had a bad feeling when the series went to seven games. I guess it just wasn’t meant to be. Shame.

I am sort-of happy for Heat President Pat Riley, though. Time-out here for the story of why that is: When I was doing my show, Karen’s Restaurant Revue, and he was still living out here, we were both guests at two big events. At the first one, people told me that Pat was pointing at me, and saying something about me, which, of course I assumed was something bad about my wild attire, being so dapper himself.

At the second one, I was sitting at a star-studded table with the fabulous Angie Dickinson, (who was a dear friend by then,) and Martin Mull and his adorable wife, Wendy. They were all telling me how they loved my show, so it was already a great time for me. At the end of the presentation, Wendy and I were standing there chatting when I felt an arm around my shoulders. I saw her go white, and I followed the arm all the way around and up to…the handsome face of Pat Riley! When he saw my shocked visage, he explained, “I know you; you’re my favorite talk show person!!!” I almost fainted! All I could come up with to say back was, “You’re so gorgeous!” What an idiot.

He said he hoped he’d see me again, and that was it. I make Wendy re-tell me the story every time I see her. And you know what? When Pat was honored for something the next year, he requested me to be one of the celebrities on stage with him! I couldn’t believe it! Even though we’re not in touch, and he probably wouldn’t even remember me now, with all the people he’s met in his life, his admiration for my show has always been a source of pride for me. So, I can never be against him winning.

Conversely, I can’t stand one of his Heat players, Shane Battier, but I’ve got to admit that they would not have won without his many three-pointers in Game 7.  I don’t even know why I don’t like him, but he just rubs me the wrong way. Mr. X, too. But I do like what he said in a post-game interview, regarding what he had just done: “It’s better to be timely than good.”  (And I realize it must be hard for him to have gone from being top dog in high school and college to a bench player where he’s usually an afterthought. I mean it.)

One thing that shocked me was NBA Commissioner David Stern’s terrible grammar and pronunciation during the trophy presentation. First he said, “Thank yous, Miami Heat and San Antonio Spurs.”  I know he’s from New York and New Jersey, but “yous” plural??? Ridiculous. And then he congratulated the “western conference champeens.”   He actually mispronounced “champions” as “champeens” three times!!! How did I never notice this about him before??? And why has no one ever corrected him? Let’s hope the new guy next season is better-spoken; we have enough terrible grammar in the NBA as it is! I’d expect the head of it to be at least a cut above. Even one cut!

Lastly, I have to say that I really should ban myself from watching sports.  I’m too much of an Empath.  I can’t risk the pain. Outside of Tim Duncan, and perhaps Manu Ginobli, I don’t think that even most pro athletes take losses as hard as I do on their behalf.  When Charles Barkley and his Phoenix Suns lost in the Finals to Michael Jordan and the Bulls years ago, I couldn’t rise above how bad I felt for Charles. He and I had a mutual friend out here, so, after a few days, I called her to see if she had heard from him, and if so, how he was doing. Turns-out, she and her husband were his guests for that last Finals game, and even stayed with him in Arizona!!! So, she knew exactly how he felt!

She said they went back to his house after the game, had a cocktail and wound-down, and then went out to dinner! Went to dinner!!! While I was a sobbing mess on my living room floor and took to my bed for a couple of days over his loss!!! Do you think perhaps I have a problem? Or maybe a couple?

So, I have to end these musings now because I have to get back to bed and agonize over this latest NBA Championship. And get my energy back before Wimbledon begins on Monday!