Trending
You are at:Home»BASKETBALL»SPORTS/BASKETBALL: GOLDEN STATE WARRIORS ARE THE 2015 NBA CHAMPS!
By Karen Salkin on June 17, 2015 · BASKETBALL, SPORTS

The very first thought I had when I opened my eyes this morning was, “Did that really happen?  Did the Golden State Warriors really win the Championship, or did I just dream it?”

I was a wreck worrying about it all this time. (Right after the win last night, I told Mr. X that, even though this game exhausted me, I had to sit right down and write about it.  He asked me, “What’s your angle?”  To which I answered, “How happy I am!” Duh.)

It was such a satisfying win; I went to sleep exhausted but oh so content.

This may be the first year that I fully understand what a gargantuan accomplishment winning the NBA Championship is, perhaps because Steve Kerr explained it so eloquently, in a sit-down interview he did with David Aldridge afterwards. (How anyone could sit down, and speak intelligently, after all that is mind-boggling in and of itself!) 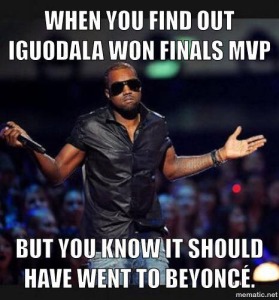 Mr. X saw this on Facebook, and I thought it was amusing enough to share with you.

The main reason that I’m so happy for the Warriors is that I’m a fan of fairness. Even with how nuts I am about sports, in general, I really can’t watch every single sporting event that’s on, obviously.  I used to try even more than I do now, but it’s just not possible.  (But, with the help of DVR, I watched every game of the two-month-long play-offs.) So, I wasn’t paying much attention to this regular season of basketball.  And then, in the middle of the year, I read about how great the Golden State Warriors were doing!  I couldn’t believe it!  They had never been in major contention before, (well, not since 1975, which was way before my constant involvement in the sport,) and now, here they were, leading the (very talented, this year) pack!

So, from the beginning, I said that I wouldn’t know what to do if my precious San Antonio Spurs had to go against the first place Warriors in the play-offs.  I still love my Spurs, but, being such a believer in fairness, how could I root against the number one team from the regular season??? Luckily (and also sadly, for the Spurs,) I didn’t have to.

And now that I’ve seen them so much, I’ve grown to love the team; they all seem so nice!  (Okay, I have to admit that I’m not a fan of center Andrew Bogut.  Who would have thought that I would dislike the two Aussies in the finals, when I usually love people from that country!) (The other one I seriously dislike is the Cavalier’s creepy Matthew Dellavedova, one of the dirtiest players I’ve ever witnessed. He’s always trying to injure somebody.)

Speaking of the Cleveland Cavaliers, let’s spare a thought for the best player in the world, LeBron James. That guy is truly amazing.  I’ve never seen anything like it. And I have seen Michael Jordan! I had thought that perhaps they should give LeBron the MVP award, despite the losing effort, before anyone else even said it; he was that incredible. He single-handedly kept his team alive in the Finals, because of the season-ending injuries to his two other key teammates. He risked his health, and pushed himself to new limits, to try to get it done for his native Ohio, to no avail.

But I really felt that the MVP should not be someone on the losing team, especially when there were so many players who helped the Warriors win. I’m sure LeBron wouldn’t have even wanted it under those circumstances.

And I couldn’t be happier for Andre Iguodala, who won that MVP trophy. He was so deserving of it. He’s the only Finals MVP in history who won without starting even one regular season game! Wow. He had been a starter in all of his ten years of being an NBA player until this season, when his spot was given to a younger player, Harrison Barnes. But with the Warriors down two games to one in the Finals, brilliant rookie coach, Steve Kerr, put Andre in the starting line-up for the next three games, all of which he helped them to win, thus giving them the Championship. I think they may have gone down to the Cavs without that one sly move on the coach’s part, and the spectacular performance by Andre, to validate Steve’s brave and bold decision.

TheWarriors’ victory is even more special when you remember that not one of the players had Finals experience!  How did they keep it together to win, especially when they got down two games to one?! What a mentally stable bunch of guys!

You don’t need me to tell you all the very interesting stats, like that the Warriors are the eighth youngest team to win the NBA Championship–we have the various sports sites for that.  But I must give props to colorful Draymond Green for his triple-double, (which is a rarity in the Finals,) which he achieved in the face of being all of a sudden asked to play center for the last three games. What an achievement!

And, even though he didn’t win the MVP Award for the Finals, regular season MVP, (which is a much bigger deal,) Stephen Curry, was the leader all the way. Despite looking like a skinny little kid, that dude is the Man!!! 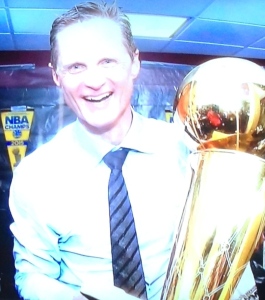 I never saw Steve Kerr this happy (and relieved) before!

And let’s wind it up with the lovely coach, Steve Kerr, who’s the first rookie coach to win since Pat Riley in 1982! I love that guy! Always have. He was a great player, an easy-going broadcaster, and now the best coach this season. He’s always classy, upbeat, personable, and he speaks honestly and jokingly with the press. And we never see him sweat. What better coach could there be?! I’m so happy for him, especially. He rounds-out a wonderful NBA story.

And, lastly, I want to thank the Warriors for winning it in six. I now have a free night, where Game seven would have been. And my fingernails thank you guys, too!