First of all, I’m thrilled that my team, the New York Giants, won the big game once again. You go, boys in blue! Congrats on a great team effort.

Second, the whole day of coverage was actually a pleasure to watch. And trust me, watch I did! From 9AM-midnight! I get really into this stuff, especially when it’s my team in the mix. NBC did a great job, for the most part. There were no reporters I hated and the whole thing really moved along.

Of course, I wouldn’t be Karen without a few musings along the way, so here they are, in sections this time, rather than my usual totally-linear presentations. 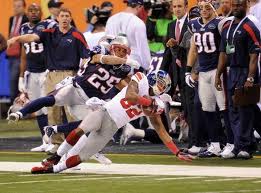 Superbowl XXXXVI turned-out to be one of the most exciting ones ever, living-up to its moniker, Superbowl.

The excitement began with the revved-up entrances of both teams. It got everyone‘s blood pumping, not just the players.

Back in the day, I had watched Superbowl XXV with my old pals, Wendy and Martin Mull, and I was so nervous for that last, Giants-opposing field goal attempt by the Buffalo Bills kicker that Wendy had to leave her own house! Martin was brave and stayed watching with the mass of tension that was me, and we were rewarded with the second Giants win. Never had I been so nervous for the last few seconds of a Superbowl since then, until last night, when once again the victor wasn’t known until the very last second. Heart-stopping. 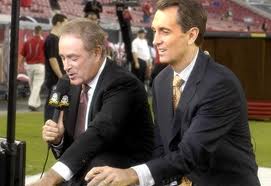 It was Chris Collinsworth’s first Superbowl as the lead color commentator, and he was excellent. (He had done the duty once before, in 2005, but was second to Troy Aikman’s lead.)

How does Michelle Tafoya look the same as she did fifteen years ago??? It’s not like she’s even good-looking, but it is amazing! I don’t see any signs of surgery, so she must just have great genes.

We don’t even know who the other female, Alex Flanagan, is, but Mr. X said her hair was a mess in the back. I actually had no problem with it!

Even though he has two previous Superbowl rings, pre-game commentator, and former new England Patriot, Rodney Harrison, is still broken-up over his not taking down New York Giant David Tyree four years ago! I thought he was going to cry on-the-air talking about it. I’m glad to see that I’m not the only one who can’t let past problems go.

Chris Collinsworth, on the other hand, was cool and laughing about someone who had beaten him twice.

Play-by-play announcer Al Michaels, made a good, intelligent reference at one point, that no one on earth got. He commented that colorful player Chad Ochocinco play was once “headlines” but is now “agate type.” I don’t think any viewers really knew what that was, especially since those last two words were so hard to make-out that even the closed-captioners couldn’t figure them out! Mr. X deciphered them and correctly assumed the definition that even I had to look-up! So, seriously, thanks for the vocabulary lesson, Al! And for the high-class reference. I really appreciated it. 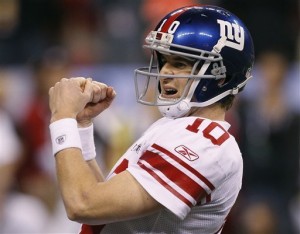 The most shocking part of all the coverage is that not once in the two weeks leading up to it did I hear Eli’s Coming! (For the Giants quarterback, Eli Manning, for those who just party on this special day, and know nothing about what you’re even partying about!) Maybe the ditty is old, but this is the Superbowl, for goodness sake!!! The announcers never even invoked it when the Giants were driving down the field!!! And I’ve had it in my head constantly for several weeks now, since the play-offs began.

Mr. X was shocked that the pre-game show had so many promos, of all types.

For the most part, the segments were either educational or entertaining or both, but the network one, that showed every person on an NBC show singing and dancing, was offensive in it’s desperation. I know that each network who broadcasts this biggest sporting event of the year has to use the occasion to try to lure new viewers to their regular shows, but they made this insult into a “feature” on the pre-game show, not as a commercial, which is what they should have done.

The story about the Pats dedicating their season to Myra Kraft, the late wife of owner Robert Kraft, was emotional and lovely.

The opening number by recently-married couple Blake Shelton and Miranda Lambert was sweet; they held hands the whole time!

Kelly Clarkson’s National Anthem was excellent; she just got on with it, without sounding like the classic Maya Rudolph parody on SNL, which most big Star-Spangled Banner singers do.

M.I.A. giving a mysterious middle finger, to who knows whom, was just stupid. It was an attempt to get her name out there, any way she could, because she’s the only performer who would have just gone unnoticed otherwise. Yet another classless weirdo who’s lucky to have a career. 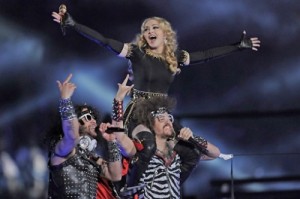 Now, to the biggie–Madonna’s much-hyped halftime show: If the old adage “it’s not how you start, it’s how you finish” is true, then she definitely succeeded.

To begin with, she came in on some sort of float, which used up a lot of time where she didn’t have to exert herself. Her entrance was how I wrote reports in school—not a lot of story, with lots of fluff around it.

Then, she sang what I call a “hundred-year-old song” while just walking around the stage. But the guy on the high-wire was great! He had new, interesting moves.

The high-waisted gold belt she was wearing over that black dress made her middle look the way that “mom jeans” do.

And, I know she’s in phenomenal shape, but why was she so klutzy??? Has she always been so, and we never noticed because of all the constant movement around her? Or were those boots just too high for her? Or was it simply her nervousness that she had been talking about?

But, her last song with Ceelo, Like a Prayer, was excellent. 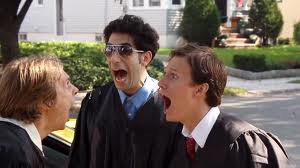 I loved the Chevy ad featuring a yellow car that a grad thought his parents had given him! It’s actually the only one I cared about at all!

On the other hand, the same company’s ad for a truck, which also featured Twinkies, made no sense. I know what they were going for, sort-of, but it didn’t work and was just a head-scratcher. If they were trying to say that Twinkies are as indestructible as their trucks, (or vice versa,) that would be a slam because it would mean that they’re such crappy food that they’d last through devastation, which they could be sued for. But, the product placement was so major that it seems the Hostess company paid them for it, which means the inclusion was supposed to mean something good. I just don’t get it. And was this ad made before the Hostess company just went into bankruptcy? (Or is at least trying to; I can’t pay attention to everything.)

The Coke polar bears commercials were just stupid and meant absolutely nothing.

I hate the violence in so many ads; even the one for some brand of Greek yogurt, that starred John Stamos, had crazy violence! He should be ashamed of himself, especially since he’s Greek himself.

Go Daddy’s ads with Danica Patrick and Jillian Michaels, two unfeminine chicks, (especially Jillian, who everyone thinks is gay to begin with,) painting a nude female model, were very weird. It would have been creepy if it was guys painting a nude woman, too, but somehow, not as much.

I wouldn’t buy a Hyundai because of the commercial with a mountain lion chasing a person. At one point, they disappear down a hill, and it doesn’t look good for the guy. How is that supposed to make us want to buy their car?

But the Doritos commercials were downright offensive. I thought the dog killing the cat and then bribing his owner with with the crappy chips to keep it a secret was dreadful enough. But I will never, ever buy them again because of their baby slingshot ad!!! That was the most offensive thing I’ve ever seen on network television. And how irresponsible of everyone involved; they know that idiot kids do stuff they see on TV!!! The tiny little warning, “don’t try this at home” just does not cover it. Those ad execs are some sick mofos. 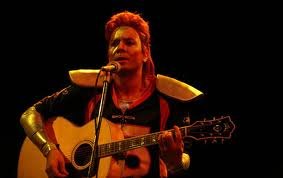 I think that I think that Jimmy Fallon just may be the best talk show host in history. And that’s coming from one of the finite number of people who have guested on Johnny Carson’s show! I really didn’t think anyone could ever rival the great man, but Jimmy had me rolling in the aisles last night on his post-game special.

I’ve never actually watched even a quarter of one show of his shows. To be more accurate, not even more than a minute. And that was only once. But the bits I’ve seen elsewhere look great. So, I’m at least placing him side-by-side with Johnny. For now, at least, because perhaps it was just the euphoria of the Giants victory that made me giddy. But I was grateful for the laughs, no matter how they were manifested.

And for the Giants winning yet another Superbowl! Yay!!!