Trending
You are at:Home»Uncategorized»SPORTS: MEETING USAIN BOLT
By Karen Salkin on September 30, 2011 · Uncategorized

But if anyone had asked me which Olympic athlete I was sure I’d never meet, it would have been three-time Track and Field gold medalist Usain Bolt, the fastest man in the world…EVER!!! First of all, he’s rarely in this country to begin with, least of all LA. Second of all, he’s just way too famous!!! I just did not envision us having a conversation anytime soon. (Or ever.) 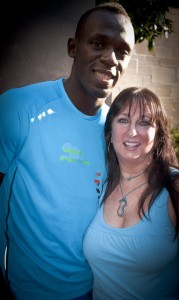 But, to my absolute delight, that’s just what we did the other day. And I’m thrilled to report that he’s downright darling, charming, intelligent, and most importantly of all, caring and personable. I was knocked out by him.

I believe I’m speaking for most basic sports watchers when I say that, judging by his many and amazing achievements, and his “Lightning Bolt” celebrations after his victories, I really expected him to be full of himself, above everybody, and distracted. But, after a charity race the other day, held at gorgeous and historic Greystone Mansion, in horrible September heat, Usain took way over an hour of his time to stand in the sun and answer every interviewer’s questions patiently.

I was supposed to go first, but wound-up going next to last, so I got to watch him answer banal question after banal question, each with kindness, thought, and utmost sincerity. Since this was in private interview form, rather than a press conference, most journalists asked the same questions and Usain was just great. I think most of us would get annoyed at having to answer the same questions twenty times. At least, I know I would. I wouldn’t even repeat a story on the gazillion episodes of my show! 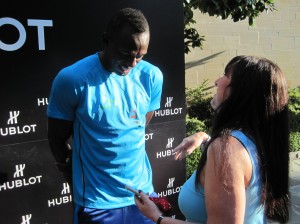 Usain Bolt being interviewed by Karen Salkin for www.ItsNotAboutMe.TV. Photo by Scot Hampton.

So, I must report, with utmost pride, that the only one Usain Bolt shared a laugh with was none other than yours truly! That’s because, with the help of my mother’s new aide in Brooklyn, Jacqueline, I was able to speak his native Patois with him! I knew only two sentences, but he seemed to really appreciate it.

Plus, I know that he owns a restaurant in Jamaica, called appropriately Tracks and Records, and still being a part-time restaurant critic myself, we were both into that discussion. Usain even gave me the double finger between our eyes, telling me that we’re the same. If only. (Well, I can talk as fast as he can run! That would be some contest, eh?)

He and I had on shirts in the same blue hue, which I complimented him on, and when I asked him how he came up with his color choice, with no hesitation, Usain answered, “I knew you were going to wear it, so I wanted to, too.” What a guy. (And I didn’t even look great, which you can see from the photo, so it wasn’t a flirty thing; he’s just a lovely, lovely fellow, as my mother would say.) 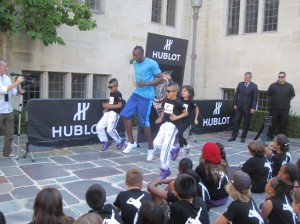 So let me tell you the occasion of his arrival in Los Angeles to begin with. Usain teamed up with Swiss watchmaker Hublot to raise money for his eponymous foundation, which helps children worldwide, with a concentration in his native Jamaica. They did that by hosting a “race” with kids from Star Education, a non-profit after-school program that features community-based cultural enrichment projects. First, Usain met the participants and gave them (and the assembled media, if we were smart enough to pay attention,) running and exercise tips. The kids seemed thrilled to meet him. 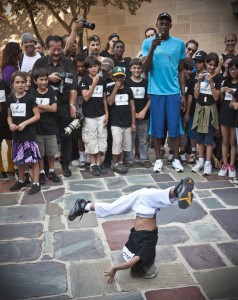 When some of them put on an impromptu break-dancing demonstration, Usain was right there in the front line, filming them, just like the rest of us. Have I mentioned that I love this guy???

Then we got to the “race.” Ten children went up against Usain in his signature100 yard dash, and Hublot donated $10,000 for each one who finished ahead of him. Surprise, surprise—they all did, including the two girls he had to remind to start running. It was adorable. This is one race I should have gotten in on!

[Note: Even though I’ve run in celebrity races for charity, (like the Jimmy Stewart Marathon where despite having Olympian Marty Liquori as my team captain and personal coach, and running against just other celebrities, my team did poorly, I’m sure because of my performance,) I’m scarred in this category of sports due to coming in far last in the fat girls group when I raced in elementary school. (Yes, you read that right–I was fat, from eight to twelve.) I’m still constantly bringing up the rear. Actually, come to think of it, it’s a good thing Usain’s race was open to only chronological children, and not emotionally young ones like moi.] 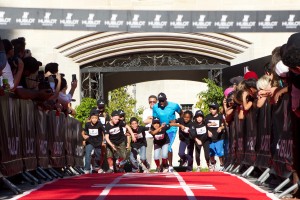 Usain was gracious throughout the whole event, and the kids had a wonderful time. I was really taken with his demeanor from the second he appeared in the mansion courtyard.

I also spoke with Hublot Managing Director, Ricardo Guadalupe, after the race, who assured me that their five-month-old store in Beverly Hills hasn’t had an official grand opening party yet, so, hopefully, I’ll have another fun event to tell you about in the months to come. I can tell you right now, though, that I don’t think even a Beverly Hills soiree will compare to having Usain Bolt laugh at everything I said to him!