Trending
You are at:Home»KAREN'S MUSINGS»SPORTS: DEREK JETER (INJURY AND BEYOND)
By Karen Salkin on October 15, 2012 · KAREN'S MUSINGS, SPORTS THOUGHTS

DEREK JETER (INJURY AND BEYOND)

This column took forever to write because, rather than being the happy tribute to my favorite baseball player, I must now discuss the horrible injury he suffered over the week-end. Actually, we all suffered because the entire sports world is feeling down over it, even his opponents.

I started on this lauding of New York Yankees shortstop Derek Jeter two months ago, but other time-sensitive daily topics kept coming up, so this one got pushed down. At that time, it seemed to me that I was the only one appreciating him anymore, so I wanted to point out his accomplishments to anyone who was willing to listen. I was amazed at what Derek has accomplished this year, while he’s thirty-eight years old! He’s such a pleasure to watch still. And root for. 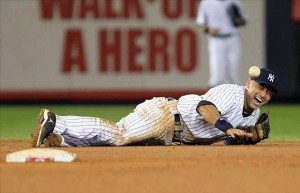 But now, I can’t push this column off any longer because of the sadness of this week-end, when he fractured his ankle on a play, and is out for the rest of the play-offs. It must be heart-breaking for a guy who pours his heart and soul into everything he does, especially when he’s the only one who’s producing for his beleaguered team.

His season came to a crushing end when he dove for a ball, and rolled his left ankle. He’s had a hard time with another injury to his left foot earlier this year, but this is said to be an entirely different situation. They told him it should be a three month recovery, with rest and therapy, but this week, he’s seeing the supreme ankle surgeon in the country, and they’ll decide what’s best for him. [Note: I just sprained my ankle three years ago, which set-off all my back problems, as it turned-out, but all the doctors and athletes told me that I would have been better off breaking it, because it’s easier to heal. So I actually felt a tad better to learn Derek had, indeed, broken his. Let’s hope they were all correct.]

I can only imagine his frustration as he had to watched his beloved team lose the first two games in the American League Championship Series, not being able to contribute. At home, no less! They lost the first after he went down on Saturday, and the next one yesterday. You could just feel the air go out of the stadium when Derek didn’t get up, and the downbeat vibe continued through Game 2. I had hoped, as did everyone it seemed, (outside of Detroit Tigers fans,) that the team would “win one for the Gipper,” so to speak, but, alas, without Derek in the line-up, the rest of the team played perhaps the worst they ever did. (A dreadful late inning call, that allowed multiple Tiger runs, didn’t help.) It seemed they were all still in shock and just couldn’t rise above and pull it together.

Unlike most of the sportscaster who were calling/discussing the game, and thought that, as usual, Derek would somehow magically be able to play the next day, I knew it was serious when he didn’t pop right up. That’s so unlike him. I realized right away that he was unable to get up. But, for him to need help off the field, I knew it was even worse than I first thought. His manager, Joe Girardi, said later that Derek told him to not carry him! But we all saw that he couldn’t put any weight on that leg.

So, fingers crossed that his recovery goes great, and that he’s as good as new next season. (And that both he, and pitching legend Mariano Rivera, who tore his ACL at the very beginning season, thus book-ending the horrors for the Yanks, will be back and better than ever in the Spring.) 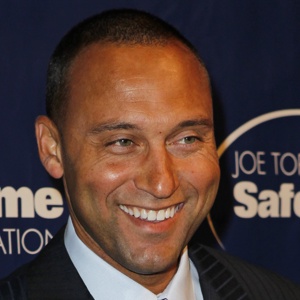 And now, I still want to tell you some of the great things about Derek Jeter that I was thinking two months ago! Even though I’ve been a fan of his from the very beginning, I still get joy out of him as each game goes on. And my respect and admiration has never wavered.

This season, his accomplishments were the talk of the sport. One surmised that the reason he wasn’t in contention for MVP is that this is what he always does; it’s not as special a type of season for him as it was for others.

All of his crazy baseball records, as of now, (with more to come, I’m sure,) are too many for me to list here. (If you’re interested, you can always just look them up.) But, every time I watch a game, (which is just about every time they’re telecast here in Los Angeles, and when I’m in New York, every day the Yankees play,) they show more and more of them. It seems like he sets, or ties, a new record every day!

This season, he caught up to Willie Mays, (who’s considered by many to be the greatest of all time,) in some major categories, and then beyond, right in front of my eyes! Who would have thought that of this little skinny guy who’s been my all-time favorite player since he first came up? (As of this writing, they’re the only two players to have these four stats: at least 3,000 hits, 250 home runs, 300 stolen bases, and 1,200 runs batted in!) 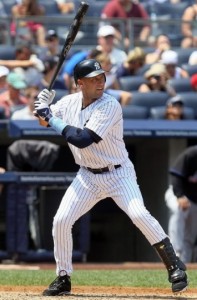 From what I can see, Derek Jeter is the most respected guy in baseball, for many reasons, including his heart, grit, low-key demeanor, and pure talent! One long-time rival, Chipper Jones of the Atlanta Braves, said of him recently, “I can’t tell you the jealously throughout the beginning of my career, that I had for DJ. But once I got a chance to know him and play with him, [at an international competition] my view of him completely changed. This guy is such a great face for the game of baseball. He deserves everything he gets. I’ve come to respect him a heck of a lot over the last ten to fifteen years, not just for the player he is, but for the person he is.”

And Bobby Valentine , the manager of the Yanks’ rival Boston Red Sox, said Derek’s the best player he’s ever seen.

I have to add that, at the advanced age ( for a baseballer) of thirty-eight, he’s still the player who looks the best in a uniform. Let’s hope that continues next season, as well!

Hang in there, Derek! And, if you need any chicken soup while you heal, just let me know! (Don’t worry—I’ll just pick it up for you, not make it myself!)