HOW TO DO APRIL FOOL’S JOKES

Before I move on to reviewing events for the rest of April this week, I have to first give you guys a quick tutorial on how to do April Fool’s jokes, which many of you need. (And no—I’m not trying to prank you guys into thinking that today is April 1. I, obviously, couldn’t tell you all this on Friday, because I didn’t want the peeps I was planning to pull the pranks on would not see them coming. Duh.) April Fool’s Day is actually my favorite day of the year, and I’m always amazed that so many people either don’t pull pranks, or do them sooo wrong.

I was sort-of sad that Friday got away from me, and I had to choose between designing jokes/pulling them off, and catching-up on time-sensitive sporting events. So I did only a handful of jokes this year, some very satisfying, some not so much. (It was a brutal choice for me, loving both sports and April Fool’s Day so much. So I compromised with just those few jokes, and watching the sports for the entire day and night. But otherwise, I might have read the sporting results before I witnessed the competitions for myself, so I made the correct choice, even if it meant going without sleep for a day or two. But that’s another story.) 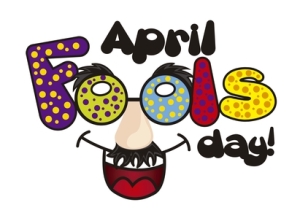 I’m horrified when people do April Fool’s jokes in a stupid, or painful, way. It’s not good for anyone, neither joker nor recipient, to do them in the wrong manner.

My friend, Jeanine Anderson, is even better at them than I. (I don’t know if she still does them, though; we can never “get” each other anymore, so we stopped trying. But she was the best at them, back in the day.) Two that she pulled on me, that have lived in infamy, were really elaborate, and made me sort-of sick. But I was so relieved when she said those two magic words at the end.

So, here’s how to pull off a successful April Fool’s prank:

The first rule is that you can’t scare people too much, like with something about death or awful health. Those topics are absolutely acceptable.

But you do have to make it something bad, (but not so bad, as with the verboten topics I just mentioned,) so the recipient will be relieved when you take it away. You can’t tell them something great, like that they got a job or somebody likes them, etc., and then take the good thing away. That would just be a bummer all the way around. (And sadly, that’s how most people do it. So wrong.)

Here’s a perfect example of how not to do it: A few years back, one of my actress friends announced on Facebook that she had gotten a role on Broadway. I recognized it right away for the awful April Fool’s joke that it was, but the rest of her pals were crushed when she told them she was only kidding. You could actually feel the air drain out of everyone in her cyberspace orb.

And here’s an example of how it should be played: A few years ago, as I was leaving the house in the morning, I told Mr. X that a new potential intern was coming over earlier than expected, and he had to entertain her until I got back. That was a situation he more than didn’t want to happen, so when I gleefully declared, “April Fool’s!,” he was really relieved and could join me in my mirth. See? That’s a win-win.

The more based in truth the joke is, like in the above case, (where I made it about a real worker who he knew would be coming over sometime soon, when I would be home, but he wouldn’t,) the more believable it will be.

And, most importantly, it has to be quick. You can’t prolong the pain, or it will lose its goal of making everyone laugh. It will just make you look like a douchebag.

So, there you have it–the secrets from the supreme jokester. Just don’t try to use them on me next year!