Trending
You are at:Home»SPECIAL DAYS»SPECIAL DAY: MY ANNIVERSARY WITH LA! (AGAIN.)
By Karen Salkin on July 27, 2015 · SPECIAL DAYS

MY ANNIVERSARY WITH LA!  (AGAIN.)

Today is my actual anniversary of coming to LA! And I still love it as much as I did on that very first day. 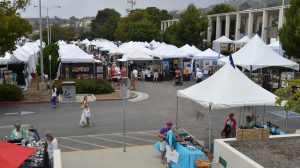 So, this past Saturday, Mr. X and I did our annual almost-my-anniversary-with-Los-Angeles celebration by going to the Malibu Arts Festival, so we could then drive down Pacific Coast Highway to Westwood, to commemorate my coming down from Big Sur with strangers on that very first July 27th. (I’ve told you the story of it before, so, if you’ve never read it, and would like to know of what I speak, here’s the link to a previous column about the whole shebang:  itsnotaboutme.tv/news/miscellaneous-l-a-and-me.) [Note: I took that photo at the top of this column because that rock in the ocean looked like a bushy dog, looking to the side.]

But last year, in my anniversary column, I wrote: “I’ll make a note now for next year, to tell you the whole fun story of how I got talked into staying here…” I’m sure no one in the world would remember that, (duh,) including me, but I just saw that note when I re-read that column, (which I did in my ongoing attempts to never repeat myself in this e-zine.)

So, since it’s a good one, here is that never-told-in-this-space-before story. (And please keep in mind that it’s more interesting verbally, but I don’t have the energy to do a YouTube video of it right now. Maybe next year. I’ll make another note about that right now! Oysh.) 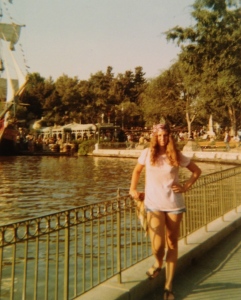 Karen Salkin, as a teen-ager at Disneyland for the first time, (with a scarf on her head.) Don’t judge. Photo by Krishna.

That first year, I had been here in Los Angeles for about only two weeks, (from my native Brooklyn, New York,) staying with a virtual stranger in Westwood, (on my since-then-beloved Gayley Avenue,) when one of my new next-door neighbors, Krishna, offered to take me to Disneyland. On the way, I told him that I was sure that when I got back to Brooklyn, this whole time in LA would feel like just a dream. (I still think that’s pretty prescient for a teen-ager to realize!)

Krishna asked me why I was going home, and when I said it was because I had to, he asked me why I felt I had to. Shocked by the question, I answered emphatically, “My family, my friends, my college, my boyfriend.” Duh, again, to all of them. When Krishna told me that those weren’t reasons to leave, I asked him, “How so?” His answer changed my life. I’m sure his words seemed even wiser than they were because he was Indian; when someone from that country gives you advice in their inimitable accent, it sounds like it’s coming straight from Gandhi!!! 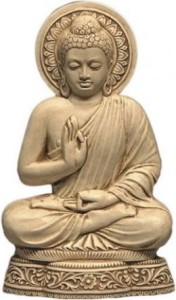 He said, (he was driving, so I’m sure he didn’t do lotus position fingers, but I’ve always pictured him delivering his words that way,) “Your family will always be your family, you’ve already made friends here in LA, (and you can keep the ones in New York, too,) you transfer to a college here, and this boyfriend won’t be your boyfriend for life–you’re too young for that.” Wow! Just wow. Everything Krishna said was correct!

So, I asked him how I would live. Never having been on my own, I couldn’t imagine how to do anything! As a teen-ager, I still lived at home, and had been attending the local college, which was right next door to my high school! I had had the same boyfriend for three years, (which is a lifetime at that age,) and, because both my parents were teachers, I had grown-up with the greatest nanny ever, who did everything for me. And I mean everything.  I’m ashamed to admit this, but even at that age, Edna was still washing my hair!!! 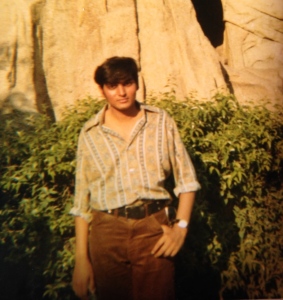 Krishna!!! (I was shocked to discover that I did, indeed, have a picture of him! And I found it easily, which is even more shocking. Photo by Karen Salkin.

He told me that I’d get an apartment, and a job to pay for it, and apply to UCLA for a subsequent quarter. And he was right, about all of it.

My mother cried every time I talked to her for awhile, I broke-up with that boyfriend, (but we’re still great friends–he’s basically family to me now,) some of my New York pals felt like I flat-left them, but most of them saw my new chapter as just another “Crazy Karen” shenanigan, and privately cheered me on.

And, not only on every July 27, but just about every day of my life since that first one coming down Pacific Coast Highway, I’m grateful to Krishna for breaking it down for me so wisely.

So, when you’re giving advice to someone, please make it’s as sage as his was. You never know how affecting your words can be.

Happy Anniversary to LA and me!