Trending
You are at:Home»SPECIAL DAYS»SPECIAL DAY: MY ANNIVERSARY WITH LA 2018
By Karen Salkin on July 27, 2018 · SPECIAL DAYS

MY ANNIVERSARY WITH LA 2018 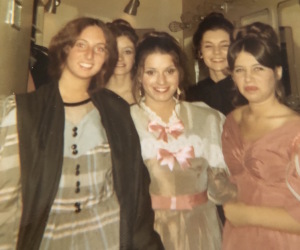 Karen Salkin on the far left, making her Los Angeles theatre debut that night, right after she first spoke to Mr. X by asking him, “Wanna zip me up?” (Speaking of whom, he’s the one who took the big photo of Karen Salkin, at the top of this page.)

I love LA for so many reasons and on so many levels, and have done so from the moment I came down Pacific Coast Highway and entered Malibu those many decades ago. I felt I could breathe for the first time in my three-week-long cross-country-from-New-York sojourn.

And I could not imagine that just three nights later I would lay eyes on the love of my life, and then actually appear onstage with him the night after that, after asking him to zip me up in my costume, of course.

I’m a big believer in “the journey,” so that’s why every July 27 I relive my first steps in LA. I’m always grateful for all my experiences in my wonderful adopted home, yea or nay. 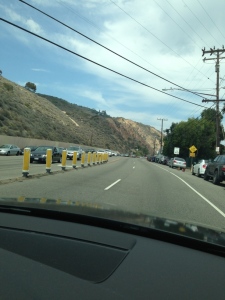 Coming down PCH, on one of my many anniversary trips. Photo by Karen Salkin.

So now my annual lovefest with this city is here yet again. I usually celebrate my anniversary with Los Angeles in the same way every year—drive up past Malibu, and then come down PCH, pretending it’s my first time, straight to 501 Gayley Avenue in Westwood, and then take pix in front of my very first destination here. But being that today is Friday, when traffic is especially bad, and I’d have to borrow Mr. X’s car for the frivolity, (because mine is taking a break right now,) I just may forego it this year on the exact date, and do that ritual over the week-end.

But I will spend some time today reflecting on just how lucky I am to have landed here. I cannot imagine what my life would have been like had I not fallen in love with my beloved LA.

Happy Anniversary to LA and me, once again!