Trending
You are at:Home»Uncategorized»SPECIAL DAY: MY 1,000TH ANNIVERSARY WITH MR. X
By Karen Salkin on July 7, 2016 · Uncategorized

I just realized that I celebrate my anniversary with Mr. X in print here only every other year.  At first I couldn’t figure out why that is, and then I realized it’s because I’m too involved in watching Wimbledon to write about anything other than tennis during this time!

But this year, I’m making the time to do both—laud my uber-long relationship with Mr. X while watching the iconic tennis tourney.

But I am taking a bit of the lazy way out.  I wrote several of my favorite tales of Mr. X in my very first column about our anniversary, (which was six years ago,) so, since even I can’t remember everything I’ve written in that time, I’m re-printing a few of these here, and adding my favorite story, which I can’t believe I’ve never told you guys before! 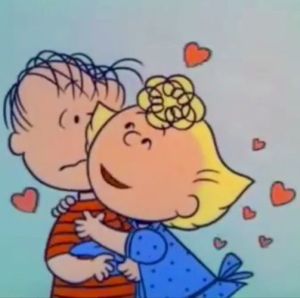 And, after all these years, he’s still the Linus to my Sally.

–One day, I was pouring my heart out to him about how I fell in love with him because he was so talented, and saying that I didn’t even know at the time that he’s the funniest person there is, or that he can dance, sing, and play instruments. (And has the most gorgeous back!) Then I said, “Okay, now you tell me the story of how you fell in love with me,” to which he answered, “Ill let you know when that happens.” We had been together for many years at that time. Can you see why I love the guy?

–People always ask if we’re married, living together, or just dating. His answer? “It’s a hostage situation.” I’m afraid that I can’t even say that he’s wrong.

–I asked him, “If you die first, and look down, and see me with another guy, will it be okay?” He came back with, “Well, let me ask you this–will I already have been buried?” Good question, actually.

–This is a good one, but within the story, I have to tell you something good that a guy said about me once, because it’s the basis of the story. So please forgive me for doing that. Remember–I didn’t say it, a guy I know did. Here it is: I was at a party with a horrible former pal a few years back, and we hung-out with several people I knew. One handsome man was telling the assemblage that his wife knew he had a crush on me, and that all the other guys who watched my show felt the same at the time. (Remember—this was a long while ago.) So, when the jealous bi-atch pal was dropping me off at the end of the night, she very rudely asked, “Why do you think it is that guys like you, Kar? Do you think it’s your chest?” Since I’ve always disguised it, I knew that wasn’t it, but I didn’t have an answer. It wasn’t for me to figure it out. Or to even discuss. And her insensitive question really bothered me. When I told Mr. X of her rude query, he quickly stated, “I know exactly why guys like you.” Preening all the way, expecting to hear a litany of my shining qualities, I excitedly asked, “You do???” To which he gave me the supreme answer, “They don’t know you that well.” I swear, that’s my favorite comment of his of all time!

–Now here’s the best one, that I can’t believe I never told you guys!: As I was switching channels one day, I noticed at the end of some talk show that they were asking for people to contact them if they’re being stalked by a former relationship. I jokingly suggested to Mr. X that we contact them about one of his ex-girlfriends who I felt was following our lives a little too closely. But he answered back, with an incredulous tone, “Contact them about her?! She’s not the stalker. You’re the stalker! We should contact them if ever they a do a story about a stalker who won!” And you know what? To this day, I’m proud of that fact. I should give lessons in how to get your man!

And, as witnessed by today being our hundredth anniversary, I know how to keep him, too!

[Happy addendum: I’m happy to report that this year, at Thanksgiving, Mr. X finally told not only me, but the entire assemblage at dinner, how he fell in love with me! We were all floored. But I’m pretending I didn’t hear it because the torture of him making believe he doesn’t really love me is so much more fun than knowing the truth. For both of us. I guess we are made for each other.]

[Note: It’s funny—I just noticed that last time I wrote a column about about this date, I called it our 100th anniversary! And that was just two years ago!]