I don’t think I’ve ever wished you guys a Happy Leap Day before, even though ItsNotAboutMe.TV has been around longer than four years. (That means I could have done so in 2012, but didn’t think of it. I was too busy giving you the lowdown on yet another Oscars suite!) 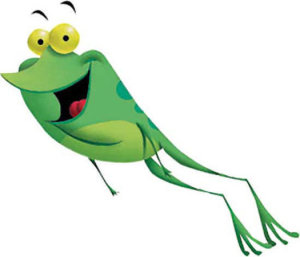 So I apologize to you “leap babies” for being so remiss. And I also feel bad to myself because the symbol of the day is frogs, (get it?—who else leaps?,) and my best bud is Froggy, who’s been with me since about a month after I arrived in LA as a teen-ager! (But I’m afraid his leaping days are behind him; I’ve had to sew several bodies on him since the beginning. I guess all that cuddling at night, and during naps, has taken a toll on him.) [Note: In case you didn’t figure it out, Froggy is technically a stuffed animal, but he’s very real to me.]

So, back to actual Leap Day, which, in case you didn’t know, is today, February 29. It’s that extra day that shows up once every four years. (There is a scientific explanation for the phenomenon, but I must have been absent that day.) When I was little, it was like Brigadoon to me. (For you non-Broadway-musical-savants, Brigadoon is a fictional tiny town in Ireland that materializes only once every two hundred years, for just one day. That concept still hurts my mind. But that’s how the once-every-four-years Leap Day seemed to me then. Actually, it still sort-of does.) 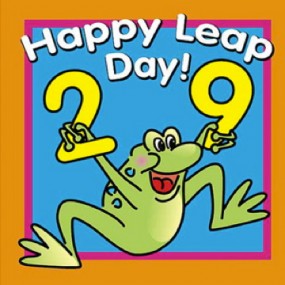 And I’m sure it feels sort-of like that, too, to the unfortunate souls who were born on this date. I’ve had only two friends in my whole life whose birthday falls on Leap Day, and I’ve always felt bad for them. The first was a friend from elementary school, Joanne, and we classmates always joked that she was one-fourth of her real age. (Kids, eh?) For example, when she eight, we said she was really two because it was only her second real birthday. And then when she was twelve, she was finally three-years-old. (I left the school after at the end of that year, so that charming tradition was over for me.)

And then, in my recent clubbing days, I met my homie, Dan, who’s a man about having a real birthday only once every four years. But I think he does love when it’s finally really his day. How could he not? 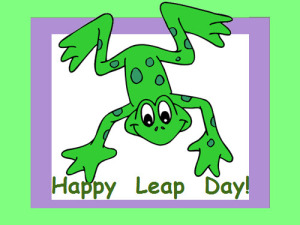 My friend, Lucia, is having her first baby now around that date, and, at her shower, I said she should just make sure he doesn’t show up on the 29th. Someone asked why, (she has several blonde friends,) and I answered that’s because they get a birthday only once every four years. (Duh.) I saw a lightbulb go on over Looch’s head, and she announced that that birthday would have been perfect for me! I couldn’t figure out why (because it would really have made me crazy,) and she said that I’d like it because then I’d never age! She may just be right about that. (But I’d have been sad to not have a party every year, which I did up until just a few years ago, when other things started getting in the way of celebratory soirees.)

This is how special I think today is, no lie—I’ve postponed my review of the Oscars a day to post this now! (And, while that gives me an extra day to work on that column, it also gives other reviewers a leg up on getting their opinions out there. Good thing I live-tweeted the show last night, @MajorCelebrity. My tweets are still up there, if you missed them, and would like to take a peek.)

So, all that’s left to say now is: Happy Leap Day! And Year!