Trending
You are at:Home»RECIPES»RECIPE: BAVARIAN CREAM JELLO
By Karen Salkin on April 17, 2017 · RECIPES

For my part of the Easter brunch that Mr. X and I attended yesterday, I made two-tone Jello Easter e-words. And they were a hit! There were big smiles all around, even before the guests took one bite; the e-words were just so fun to behold!

They reminded me that I always mean to share another of my famous Jello recipes with you—Bavarian Cream Jello. Yes, it’s too late to make it for this year’s Easter festivities, but it’s a perfect addition to any Spring day. Enjoy!

This is one recipe I did not come up with on my own—I’m just resurrecting it.  It’s one of the first recipes I got when I was little, in a pamphlet for Jello.  Believe it or not, I was fascinated with cooking and baking back then, but my nanny (and best friend,) Edna Earl Brown, hated when I tried to do it.  I don’t know if that’s because she just liked to pamper me, or because she didn’t want to clean up my mess!  (Mr. X would think it’s the latter…and he would know, trust me!)

But I was gaga over this one for Bavarian Cream Jello.  (If I remember correctly, and I usually do, the pamphlet listed it as “Basic Bavarian,” but I dubbed it “Bavarian Cream Jello” because that sounded more dramatic.  And accurate!) Through the years, it became a staple of my “lady luncheons.” I felt like the most grown-up, classy hostess when I brought it out at the end. Still do, actually. 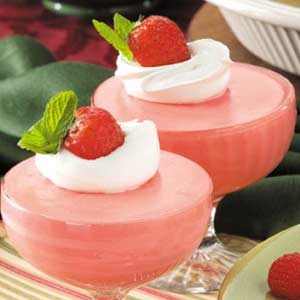 So, years later, towards the beginning of my show, Karen’s Restaurant Revue, when I was always invited to be a guest on talk show after talk show, I got a call from the (now dearly departed) Hour Magazine.  They wanted me to come on and…cook!  When they asked if I do cook, for the first time ever, I did what you’re supposed to do in show business, even when it is far from the truth—I said yes!  (As a restaurant critic, it had been years since I had even whipped-up that Jello! And I had never really cooked, per se, except in junior high school.) But I figured I’d come up with something.  And I had always wanted to cook on TV!  (Still do.)

They wanted me to do two recipes on the show, so I asked Fred Deni, the owner of my favorite Los Angeles eatery, Back on Broadway, if I could use one of their famous entrees, a shrimp dish.  He said yes, but my performance of it turned-out to be the comedy highlight of the show!  I never knew that shrimp start-out gray-ish, so I was shocked when I saw them on the air! Good thing I had this delightful, and beyond-easy, dessert at the ready. And it was a big hit! They even asked me for permission to use it in the Hour Magazine Cookbook, (which I’m still waiting for my copy of.)

For some reason, it popped into my head recently, (maybe because I can still enjoy the sugar-free version of it,) which made me want to share it with you, (now that I’m on a recipe roll here on INAM.)

So, here it is already!:

BAVARIAN CREAM JELLO (Really, any brand of gelatin will do, but, since this is a recipe from the actual Jello brand pamphlet, that’s the word I’m going with.)

INGREDIENTS (for the basic one)

1 cup boiling water
1(3 ounce) package of strawberry Jello (You can use sugar-free, which I recommend)
1 cup cold water
1 cup whipped cream, chilled (Preferably one in a tub, rather than a can. Or whip it up yourself from scratch, to taste extra yummy!)

Put Jello in a bowl, (I use the same dish I’ll serve it in,) and pour boiling water over it, stirring until dissolved. (In other words—make Jello!!!)
Then add-in 1 cup of cold water, and chill until not quite set.
Here’s the tricky part—to make you feel like you’re actually creating a dessert! Beat the almost-set Jello until foamy. (I’ve just always used an old-fashioned hand-whip. But it really is easier with an electric hand blender.)
Fold-in the whipped cream.
You can pour it into four individual dessert dishes, if you like, but I just make the whole thing in a pretty Corningware dish to begin with, or a glass one, and leave it in there. Why hassle, and have other dishes to wash? (You’re welcome, Mr. X!) Chill until firm.

IF YOU WANT TO GET FANCY:

First thaw 1 (10 ounce) package of frozen sliced strawberries. Drain it, and use the “juice” as part of the cold water in the recipe. Fold the strawberries into the Jello along with the whipped cream.

IF YOU WANT TO GET EVEN FANCIER:

Add ¾ cup shredded coconut along with the whipped cream.

Make it in an interesting mold, and top it with whipped cream and fresh strawberries.