Trending
You are at:Home»RECIPES»RECIPE: ASPARAGUS STIX RECIPE
By Karen Salkin on November 17, 2020 · RECIPES

I invented Asparagus Stix quite by accident. The first time I attempted to cook asparagus, (which was during the pandemic, because I rarely ever cooked anything before it, except for, as Mr. X says, “big spreads” for parties,) I actually messed-up the delicate spears, big time! It’s supposed to be so easy to cook asparagus, so how could I possibly have done that? They looked like none I’d ever seen anywhere before! 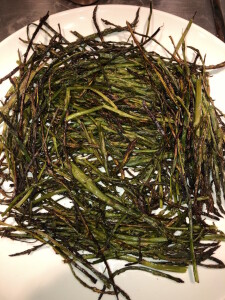 The finished product! Delish Asparagus Stix! Photo by Karen Salkin, as is the one at the top of this page.

But we tried them, anyway, and…they were soooo delicious! Crispy and perfectly salty. The next time I made asparagus, I did it the correct way—plump and tender. But Mr. X asked where the ones we had the first time were!

That’s when I realized I had to cook them my own way. And now, after many other perfect batches of Asparagus Stix, (a title I coined,) I knew I had to share my uber-simple “recipe” with you! (And just in time for Thanksgiving next week, to boot!)

I put “recipe” in quotes because it involves so few steps. But, in case, like I do, you need people to talk to you like you’re a blonde, I’m giving you every second of my process. (If you don’t need all that, here’s my big secret in one simple phrase—burn, baby, burn!) 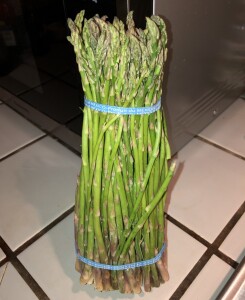 What a pack of skinny asparagus looks like. Those light-colored bottoms are what you either snap or cut off. Photo by Karen Salkin.

~ I buy four “packs” of skinny* asparagus at a time, for just one meal for the two of us. They can last in the fridge for a week or so before I cook them, if need be. (But it’s always better to use them within a few days.) *[Skinny asparagus: This is not the thick kind you find in most supermarkets.  You can usually find it in thrift food stores, or sometimes in ethnic ones. Or Farmer’s Markets. You can still make the Stix with that thicker, probably higher quality, kind of asparagus, but we like it better with the thin spears. They get really crispy when done the right way.]

~ If you’ve never cooked asparagus before, you’ll need to know this part, which I just learned myself: snap off the bottoms! You’ll feel the natural break in each spear. But watch-out—it’s addicting! Even Mr. X likes to do that part! (But do not despair if they don’t snap at first. This happened to us just once, possibly because they were so fresh that time. If need be, just lop off those rough bottoms with a sharp knife, and continue from there. After you do that, they may actually still snap a bit more as you go along in the process.) For this recipe, it doesn’t matter if the spears get really short, so don’t panic.) 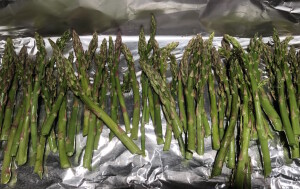 The first layer, with the foil “lip” at the top edge. Photo by Karen Salkin.

~ Rinse them off. I wash one pack at a time, really well. I use tepid water, since I’m a germaphobe and am cooking them right away, but cold is probably fine, as well.

~ Cover a big cookie sheet with tin foil, and fashion a little “lip” on all sides.

~ Arrange the spears in rows on the sheet. Try to not overcrowd them, but, if you use a quartet of bunches, as I do, they will overlap a bit. Just do your best. (They shrink as they cook.)

~ Do a bit more than a sprinkle of olive oil over the lot of them; the better quality oil, the better the taste. But you do not want to drench the spears, or you will be smelling burning oil for a long time to come. (This is also the reason for the tin foil “lip,” so that the oil doesn’t spill down all over the oven.) 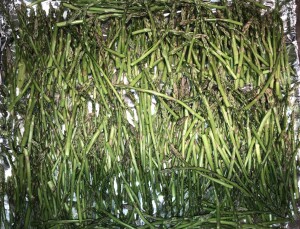 All four bunches of asparagus, cut, rinsed, and ready to go in the over. Photo by Karen Salkin.

~ Then sprinkle Kosher salt all over the spears. I suggest you do it from your hand, rather than the salt container, to control it better. The amount depends on how much you like salt.  Start with less than you think, just in case.

~ Here’s the one tricky part: Most asparagus recipes suggest you use a 400 degree oven for about a half hour. But, they’ll be fine if you have to cook them with another dish that requires a higher or lower temp. You just have to adjust the time and keep an eye on them. (But remember—you are trying to crisp them up.) I usually wind-up cooking them for about an hour, whether I use 350 degrees or 425!

~ No matter which temperature you use, take the tray out in the middle of your timing, and gently turn the spears, or just move them around a bit, so they each get enough oil and salt. They will be much, much smaller than when you put them in, so don’t freak. 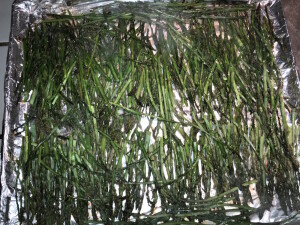 What they look like halfway through cooking. Photo by Karen Salkin.

~ Do not go by what you, or anyone else, thinks the time should be. Just when they look crispy enough to your liking, take them out of the oven and try to keep your hands off them before you can serve them to everyone else! Even the little ones that look burnt are delicious!

You know how people usually serve vegetables as a side dish? Well, I find myself making the main dishes, (like chicken, turkey meatballs, and cornbread casserole,) as just an excuse to also make the asparagus! What a turn-around for me! [Note: The pic at the top of this page is Asparagus Stix as my favorite part of a very healthful meal!]

Why not try-out my Asparagus Stix later this month for Thanksgiving? At least you know you’ll have one fun dish that day!  Just let your guests know that you made them this way on purpose because, trust me, they are not an Instagram-worthy visual! [If you do make it, please let me know your results in the Comments section below. No judgement from me, no matter how they turn-out.]