My regular readers know how much I love the Christmas “pantos” that the Lythgoe family has been bringing to Southern Californians for the past few years. 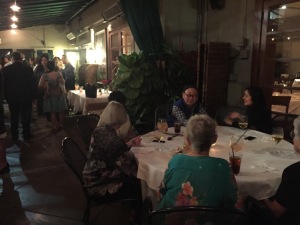 Gedde Watanabe in the center. Photo by Karen Salkin, as is the big one at the top of the page.

[Note: If you’re not familiar with the concept, or just need a refresher course (because they’re usually performed around the December holidays, so it’s been awhile since I’ve explained them,) this is what a panto is: It’s a really fun show based on a well-known fairy tale, but is not the exact story.  It features singing, dancing, some slapstick comedy, a male actor obviously playing a woman, a bunch of double entendres, and a lot of audience participation, often by loudly booing the villain.]

To announce the new show for this season, and new venue, (it moves from the usual Pasadena Playhouse to the humongous Pasadena Civic,) the producers held a lovely reception on the patio of Bistro 45, one of the few Pasadena eateries I reviewed in the early days of my former TV series, Karen’s Restaurant Revue.  So the entire evening was a win-win-win for me!  Good food, with people I’m a fan of, for an entertainment I’m crazy about!  You know that I was not going to miss this one!!! 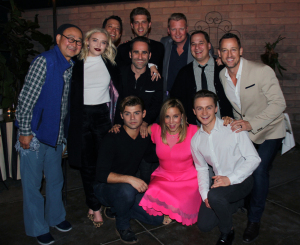 My New Best Friends, Kris and Becky Lythgoe, not only announced that the offering this year will be Beauty and the Beast–A Christmas Rose, (which even Mr. X said will be a “lot of fun,”) but they surprised us with the fact that they’re also mounting different pantos in Laguna Beach, San Diego, and even Houston!  You know that I’m tempted to see them all! (Well, maybe not the one in Houston because I’ll still be sulking over their Astros beating my Yanks to get to the World Series this year.)

The one in Pasadena will star a quartet of Broadway performers, most notably Gedde Watanabe of Pacific Overtures, whose first panto this will be. (I saw him in The Fantasticks at the Pasadena Playhouse last year, and he was adorable, so I look forward to seeing him work again.) I noticed him at the party, being low-key but still holding court, and all of the people at his table had big smiles on their faces the whole time. 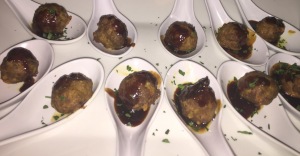 The meatballs. Photo by Karen Salkin.

Plentiful interesting hors d’oeuvres were passed for the first half of the fete. They included grilled shrimp, carrot and zucchini tempura, little beef meatballs (on spoons—fun!,) mini salmon-caviar crepes, shot glasses of creamy tomato soup, (which was my fave, even in this heatwave!,) and not one, but two kinds of pizza.

After the appropriate length of time, there were several informative speeches, letting us know about the entire line-up. We also learned that there will be a few performances for the area school children, which, as a former teacher myself, warms my heart. With arts education funding being cut all the time, I’m glad that someone is looking out for these kids! 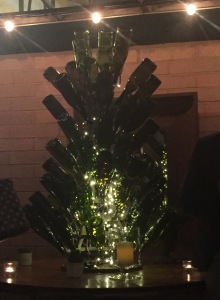 An interesting decoration on the patio–a Xmas tree made out of empty wine bottles! Photo by Karen Salkin.

Many of the actors who will be performing in the various pantos were on hand to join in the celebration. I was really happy to chat with the dynamic duo of Ben Giroux and Josh Adamson again; they played Cinderella’s wicked stepsisters last year, and they were a riot! (If you missed my review of that show, here ’tis: itsnotaboutme.tv/news/theatrechildren-a-cinderella-christmas.)

Because of the larger venue, the run of the panto will be shorter this year, so please make sure you don’t miss it. Even homebody Mr. X will be there! And, of course, so will I! (So, keep an eye out for my review of opening night in December.)