I’ve been to parties for book launches before, but never one as lavish as the one last week to celebrate Dr. Andre Berger’s The Beverly Hills Anti-Aging Prescription. It was a really lovely event.

Everything was perfect, right down to the guest list, most of whom looked like they need some anti-aging help! (Present company excepted, of course.) There should be a reunion party next year, after everybody reads the advice in the book, so we can see what a difference it makes.

Okay, that last paragraph was written semi-tongue-in-cheek, (and to make sure you’re paying attention to what you’re reading,) but the party was really delightful. It was held on the penthouse patio of the Luxe Rodeo Hotel in Beverly Hills, which, thankfully had lots of heat lamps. 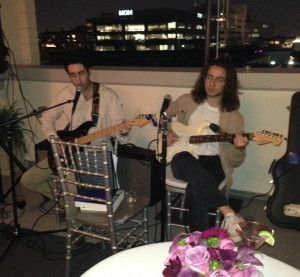 The guitarists. Photo by Karen Salkin.

As we got off the elevator, we were greeted by Dr. Berger himself, who graciously took pictures with everyone in attendance, and spent a lot of the evening signing his books for those who asked. And it was all done to beautiful live musical accompaniment provided by guitarists Adam Berger and Michael Lipp.

You know that feeding guests is always of paramount importance to me, and that they did, royally. It was a beautiful Mediterranean buffet, which pleased all the vegetarians and kosher-centric guests. Most parties don’t cater to those two groups, so I applaud this party planner for that thoughtfulness. There were falafel balls, curried potato samosas, hummus and olive tapenade with pita breads, Greek salad, and mozzarella chunks with three kinds of tomatoes. 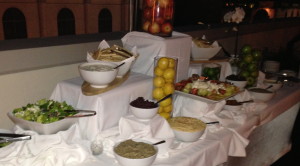 Part of the buffet. Photo by Karen Salkin.

They were also many passed treats, such as two different kinds of pizzas, and tea sandwiches, which proves what I’ve long thought about this hotel—that they should serve afternoon tea in the lobby. The best item was one for us carnivores–Chinese chicken salad, served in Chinese take-out containers, complete with chopsticks. I could’ve eaten a hundred of those, and would have, if fabulous servers Louzolo and Erikka had their way. They were kind to everyone, but I feel that they actually went out of their way for me, which I really appreciated. (Possibly they felt bad for me when they saw my bandaged hands.) 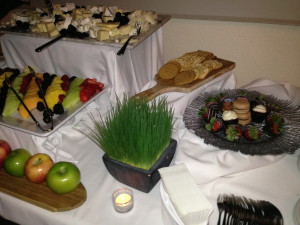 There was a separate array of desserts, which included something for everyone; there were mini cupcakes, chocolate covered strawberries, French macarons, cheese and crackers, and lots of fresh fruit. And, of course, an open bar which featured some specialty alcoholic beverage which I can’t tell you about since I don’t drink. But I think the main ingredient was pomegranate juice, which made it not that bad for you. 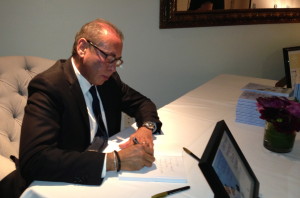 Of course, the purpose of the evening was to learn more about Dr. Berger’s anti-aging philosophies and treatments, so after he gave a little speech in the middle of the evening, they held a raffle of some of his services and products. I really don’t know anything about medical cosmetic procedures, so it was entertaining to me to see how excited most of the winners were when their prize was something like a syringe full of some face filler. I was hoping to win just a Chinese chicken salad to take home!

Whether you won a raffle prize or not, no one went home empty-handed. We each left with a goodie bag containing several beauty product samples. It cracked me up that one of mine was something entitled “Overnight Hand Recovery.” Where was that stuff when my hands first went numb three and a half months ago?! I would’ve used that sucker every night! (I’m sure “…for the skin” is implied, but you never know.) All kidding aside, I’ve always been proud of my super-soft hands, and now that I haven’t been able to take care of them cosmetically since early Summer, I will definitely be trying my new hand cream when all the bandages finally come off. And then I can hold Dr. Berger’s book so I can read it, as well! And then, hopefully, both my hands and face will regain their pre-summer-of-stress youthfulness at the same time.