As you can well imagine, (you don’t have to imagine–I write about them!,) I get invited to “spa parties” all the time. These are events that are held either in an actual spa, or more often than not, at another venue, but featuring mini spa services.

They’re oftentimes confusing, with the attendees not knowing where to turn, and the party personnel not figuring out how best to accommodate the guests who desire each service.

But, I recently attended the most perfectly organized spa party ever! It was thrown by Spaphile.com, which is a website that hooks-up its subscribers with greatly discounted services on at least a weekly basis.

To show off some of the local Los Angeles spas they feature on the site, they threw a fun event at upscale Melrose store, Catherine Malandrino. (That made me conscious of the name when Modern Family’s Julie Bowen mentioned that’s who she was “wearing” at the SAG awards a few days later.)

This is what they did that was so brilliant: at the check-in table, you got to sign-up for whichever two services you wanted. You got a two-pronged numbered “ticket” that you wrote your name on. Then you gave one half to the head of the service area you had chosen, so that they would either call your name or find you when it was your turn. None of the usual haggling over who was behind whom on line, or wasting your whole time at the party waiting on line! Genius! I couldn’t have planned it better myself. (I’m always the guest who has to figure out a system for everyone once I’m there, which is really annoying. So, this was really great for me.) 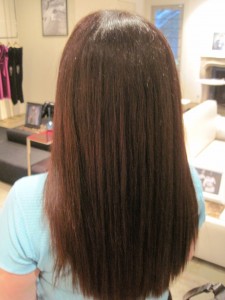 My newly-blown 'do, which is too long for the frame!

In addition to loving the organization of the soiree, we had a lovely time. For my two services, I choose hair and face. First, Farid Taheri of Joseph Martin Salon blew-out my hair, noting that I had a lot of it! Considering that we were doing it in the cozy dressing-room of the store, and that I had used inferior shampoo that day, (trust me–you don’t want to know!,) I don’t know how he did such a great job!

Then I had a quickie skin-lifting treatment courtesy of Vera Bella Spa, while resting my head on the luxurious couch in the clothing shop. I really did see an immediate difference in the height of my facial features!

While I did those, my guest got a manicure from Bellacures, who had the biggest waiting list. (I was rocking gels on my nails, so I sat that one out.) There was also a make-up application area and even a chiropractor to consult with, who told me I have great posture–I guess those early years of ballet paid-off.

In-between services and discounted shopping for the evening, we had healthful salad roll-ups and hummus from newcomer Freshii. So, what did I do with my new fresh face and hair, and stomach-ful of good-for-you snacks? Rush home to watch the Australian Open, of course!