[Note: I went to ten, count them, ten, Oscars Weeks events! Only one was a waste of time, but the other nonet were great, and each was unique. As physically-challenging to me as it all was, it was worth it to have so many wonderful stories to share with you. So, each Oscars Suite and party gets its own column, in the order of my visits to them, (with many of the celebrities being discussed in the next Celeb Sightings one,) because I want you to be able to concentrate on each and every aspect I’m telling you about. I don’t want you to miss even one second of the fun, so please make sure to check all nine days worth of stories to learn about the entirety of the fabulous-ness! This is the seventh of nine.]

This is one of the premiere events of Oscars Week! It was held once again in the garden of the Four Seasons Hotel in Beverly Hills. And this year, the weather was more than cooperative! [Note: I was extra happy to be there that night because, on my way in, I bumped into my old pal, Charles Aidikoff of the Hollywood staple Aidikoff Screening Room, celebrating his ninety-eighth birthday!!! You go, boy!] 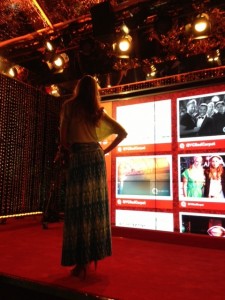 A model on-camera, live, in front of the giant photo board, featuring the party guests. Photo by Paul Supnik.

It was my third to visit to QVC’s venerable pre-Oscars soirée, where they go live to the viewing audience, so that they can share the festivities with us. It’s become de rigueur on the awards show parties circuit!

Return guests were happy to see that, for at least the third year in a row, the passed hors d’oeuvres were the same. They included tuna tartare, shredded crabmeat on crackers, salmon, caviar-topped blini, and truffled grilled cheese bites. As many of you know, I don’t eat any of those particular tidbits, but my guest and a few other pals couldn’t get enough of them.

No worries for me though; I was stuffed from an earlier party that evening. But I had definitely saved room for the famous red velvet cupcakes I knew they would serve. Joining those scrumptious creations this year in the dessert category were coffee and vanilla macaroons, and tiny chocolate boxes filled with caramel and sea salt. (Isn’t it weird that salt became a chi-chi food item recently, just by adding one tiny word, “sea,” in front of it?) 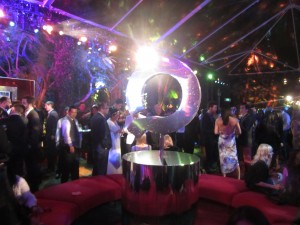 Since this is considered one of the big fashion fetes, I was happy to see most everyone really dressed up. When we were sitting down on one of the low red couches, we had so much fun just watching the shoe parade. A couple of rude-sters wore jeans (isn’t there always someone ruining it?,) and the worst offender, I’m really sorry to say, was Modern Family‘s Eric Stonestreet. He looked like he was going to a hoedown! Shame on him because he knows better. (The invite clearly stated “Cocktail Attire.” If you’re not familiar with the meaning of that phrase, you shouldn’t be invited!)

The other male celebs I spied, like The Good Wife‘s Chris Noth, Mario Lopez, and Paul Sorvino, were rocking their finest, as all in attendance should have been.

I saw a pretty little girl in the ladies room with her mom, and admired her fedora with a pink sequined band. I realized afterwards that she was young Best Actress nominee, Quvenzhane Wallis, from Beasts of the Southern Wild, one of only a handful of contender films I didn’t have time to see this awards season.

I overheard many guests lamenting the fact that QVC had stopped their previous lauded practice of giving some of us their most incredible gift bags as we left, and I’m with them; those bags, and their contents, of course, were a definite highlight. But, after being wined, dined, photographed, and visually entertained in such grand style, is anything else really necessary? I think not.