Trending
You are at:Home»PARTIES»PARTY: KREISS ANNIVERSARY PARTY FOR THE SHARON OSBOURNE CANCER FOUNDATION
By Karen Salkin on April 23, 2012 · PARTIES

This party at the Kreiss furniture store on Melrose was the kind that, had I not been invited but rather had just passed-by the lit-up space, I would have been jealous, wanting to be in there with everyone else. And I was right because it turned-out to be as easy-going as could be, (except for the fact that I was worried that the guests would mess-up the furnishings! But I must have been channeling my club promoting days, when the owners were indeed correct in keeping the rooms as dark as possible! Trust me.) 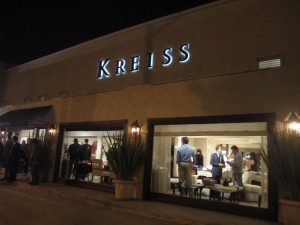 When there are multiple host names on an invitation, I never know what’s really going on, but I pretty much sussed this info out while I was there:

Kreiss was celebrating their seventy-fifth anniversary (we should all be so lucky to have one) by donating to the Sharon Osbourne Colon Cancer Foundation, in honor of the store’s founders, Norman and Eileen Kreiss. What a worthy way to celebrate. 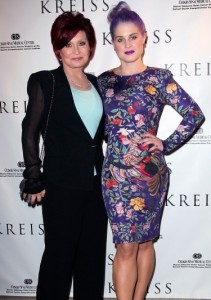 The Osbournes, who looked happier than this once inside the event!

And to that end, Sharon and her daughter, purple-tressed Kelly, were there to meet and greet, almost the whole time. I must say that this was the first time I’ve ever seen Kelly look good! She’s skinny now, and she was rocking a tight dress right out of my show’s archives! Good for her! And the lavender hair, though still wrong, was so many steps up from that gray she’s been married to for the past few months. (In actuality, it may have been only weeks, but it felt like a lot longer!) She finally looked like we don’t need to make fun of her for being a “fashion expert.” For a little while, anyway. 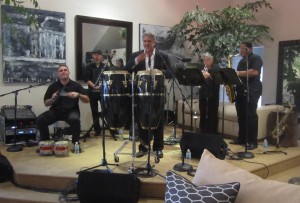 The soiree itself flowed perfectly. They didn’t discourage anyone from sitting on the gorgeous couches, and there was bars set-up in a side section of the main room as well as in the lovely garden in the back. (In the “smart move” category, it appeared they were serving only white or pale yellow drinks—no red wine near their white fabrics!) Finger foods catered by Urth Cafe (my friend was enamored of the steak skewers!,) came to us by very pleasant servers, (we loved that Gabriel!,) and a peppy salsa-esque band was on a stage in another side area. Their music was so fun and sexy that I noticed more than one couple eyeing the showroom beds!

We ended the night by meeting, and congratulating, current owner, Thomas Kreiss, with whom we commiserated on the extreme sadness of any kind of cancer, and all of our fight against it. May we soon win!