Trending
You are at:Home»PARTIES»PARTY: FABFITFUN’S WINTER FORMAL
By Karen Salkin on December 13, 2016 · PARTIES

Last week-end, FabFitFun threw the party of the season! There was so much going on there; the place was jam-packed with activities.  If my friend Alice and I had done everything on offer, we’d still be there now! 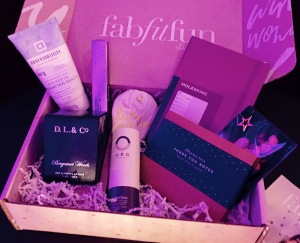 The special guest at the party–the FabFitFun Winter Box! Photo by Karen Salkin.

I don’t know how they keep coming up with so much fun; each soiree is different from the ones that came before. This group appears to have the same philosophy I always did when I had the time to throw my always-happening birthday parties. I prided myself on giving my guests a different experience every year, (which maybe I’ll tell you about on January 14, when I’m celebrating,) which no one else I knew did. Until now, I had never seen anyone else do events that way, so I’m always uber-impressed with FabFitFun’s offerings. 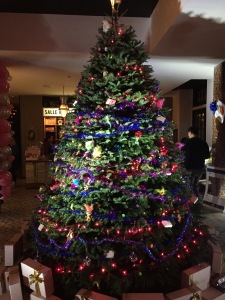 Their “90s Winter Formal” was at Palihouse in West Hollywood, and it took over the entire ground floor, both inside and out; it was laid-out perfectly. The very first thing that Alice and I noticed upon entering the premises was the beautiful giant Christmas tree that was decorated with…wishniks! (I think those are more ’60s than ’90s, but we were still entertained by their inclusion.) And what was under the tree, you might be wondering?  Why, FabFitFun’s Winter Boxes, of course!  They were closed and decorated with bows, but other open ones were part of the decor, for guests to peruse all night.  The contents were lovely, especially the 2017 appointment books and thin silver necklaces. (You can subscribe to their boxes right on their site.) 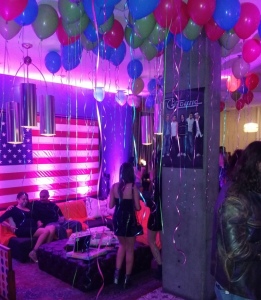 Photo by Alice Farninas, as is the big one at the top of the page.

And I loved the touch of balloons with long strings all over the ceiling in the room with the bar and dance floor. (That’s another similarity to my own parties—that’s how we do my party balloons, too. It’s actually Mr. X’s idea, not mine, and I cannot tell you how festive those long ribbons make a room!)

I also appreciated that most people made the effort to dress-up for this fete. Good for them.  [Note: At the beginning, Alice and I had been wondering why so many people were dressed differently than now, but not even close to’90s fashions. Then I realized—most of them were embryos in that decade! They could have shown-up in diapers, and still been dressed correctly!  Funny.] 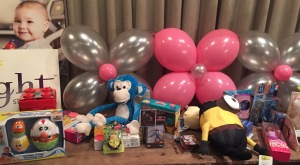 Once inside, our first destination was the Starlight Children’s Foundation table, to drop our holiday gifts for the seriously ill children in their program. I was especially happy to participate because my old pal, Emma Samms, had founded this kind organization many moons ago.  [Note: I just have to get this off my chest—I think it’s unforgivable for anyone to show up to this very generous party without a gift!  We were asked to do that right on the invitation. You could not miss that request, although I’m afraid that the majority of the guests either missed it or, worse, chose to ignore it!  Shame on them.  I’m just saying.] 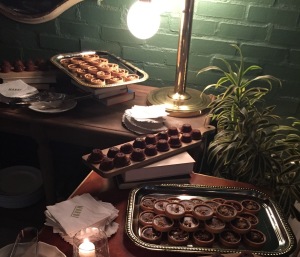 Now back to the fun and frolic.  And food, of course! In addition to the lovely, creative passed finger foods, (like avocado toast, tuna tartare, prosciutto on sugar biscuits, and mini butternut squash soups—OMG to that last one!,) there was also a dessert table, an old-fashioned candy bar, and an ice cream cart!  We wanted for nothing.

And all night, they were gifting sweat pants, in your choice of color and size, and they embroidered your initials on them right there for you!  What fun!  (I chose blue pants with pink thread—a dream come true for me.)

In the entertainment category, there was a DJ, of course, and later on, some musical performances.  One area looked like the dance clubs I used to host in the ’90s, so that really hit home for me.  I always love to hear the retro hip-hop tracks that I was known for featuring in all my clubs back then. They really are the music of my soul. 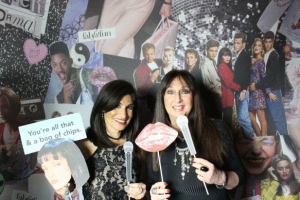 Alice Farinas and Karen Salkin in the ’90s photo booth.

We could not leave without taking fun pix in the photo booth.  They emailed them to us as moving pictures, even though they were really three stills.  Mr. X loved seeing them come in that way.  (I always email photo booth shots to him, so he can see what fun my Femme Fatales and I are having.)

On the way out, we each received a very juicy gift bag, chockfull of beauty gifts and certificates. Thanks goodness there were some energy bars in there because, after a night like this one, I definitely needed them the next day!

A better holiday party than this I really cannot imagine.  I can’t even begin to figure-out what FabFitFun can possibly do to top it in the new year.  But you know they will come up with something fantastic.  And I hope to be there to report all the fabulousness to you once again!