Trending
You are at:Home»PARTIES»PARTY: FABFITFUN 2018 WINTER PARTY
By Karen Salkin on December 20, 2018 · PARTIES

I understand why FabFitFun saves it’s annual bash for the end of the year—because no one else can compete with it!  Trust me—theirs are always THE parties of the year, but this year they threw down the mike.  Possibly literally because it was held in a happening club.

I stopped being a club promoter over a decade ago, (because, trust me, it was not a gig for girls,) but those were some of my most fun times, so I loved being in that dark, music-pounding environment again, along with about three hundred other happy revelers! 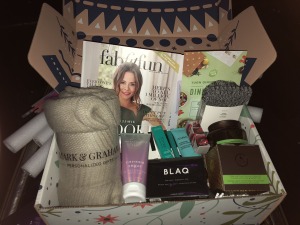 FFF’s Winter Box. Photo by Karen Salkin, as is the big one at the top of this page.

This fete celebrated FabFitFun’s Winter Box, (which you can order on-line, and should—it’s chockfull of goodies!!!) It was held at The Academy, a very spacious venue in Hollywood.  Knowing how packed FFF’s fetes get, my friend and I arrived on the early side, just in time to walk in with Misha Barton, who was on my favorite TV show of all time, The O.C. I was happy to see her looking healthy and glamorous again. (You can see how she looks now in my next Celeb Sightings column next week.)

The fun began before we even entered the premises!  Right at the check-in tables, we were offered colorful blinking “ears” on headbands, and festive glow sticks with which to create our own necklaces, bracelets, and whatever else our inventive minds could muster up.  And then once inside, we discovered more of them on every table, and half-naked guys were even carrying them around on cigarette girl trays all night. Also on those trays offered were popcorn and donuts, both doused in pink to go along with the color scheme of the evening. 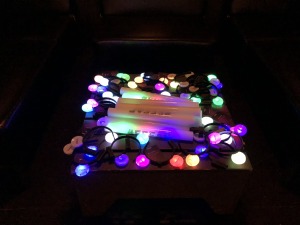 Some of the light-up “toys.” Photo by Karen Salkin.

Some of you may remember that I can’t stand even the smell of donuts because my first job when I came out to LA as a teenager was at a donut shop, where we could eat as many as we wanted. So I can’t even hear that word now! I would have been content with just eating that delish popcorn all night, but then one of the shirtless dudes came over to tell us to go behind the stage and up some steps to the giant patio, where we would find the real chow.  And there it was—hot dogs and hamburgers (with vegan options, which I’m sure many were thrilled to see,) and big bags of the most delicious chips ever!

After we were done with all that, and danced to the great DJ for a while, we finally started exploring the space.  As we turned the first corner, there was an old-fashioned bathtub filled with mini bottles of wine.  (It was pink, of course.)

Then, in the next room, there were tables of fries and mini meatball and caprese sandwiches.  I think there was also a photo booth in there, but I didn’t get that far into the area because I had eyes for only the vittles of course.  (I actually feel bad about that—this is the first year I don’t have any pix of my friend and me at the FabFitFun soirée.  Quel damage.  Serves me right for being food-obsessed.) 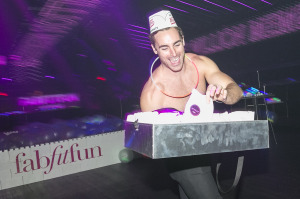 As I left that area, I thought I spied an empty ice cream cup.  I asked one of the walking-around guys if he knew where it was being served, and he pointed to an ice cream truck outside the main door, and he answered seriously, “I think that white truck may have ice cream.”  Ya think??? An ice cream truck may have ice cream?! (These half-naked males were hired for their looks, not their brains, which was actually fine with me.)  And it turned-out to be…Mister Softee!!!  I had not seen one of those since my teens years in Brooklyn!  I was amazed.  And thrilled.  What better way to cap off an evening of fun fare than with a cone of soft-serve?  With sprinkles, of course.

The evening got even better when I noticed people coming down some back stairs, carrying shopping bags.  I wondered if there was a shopping area up there, but I should have known better—this uber-generous organization, whose boxes now number over a million subscribers, was gifting us everything!  The bags contained items from their Winter Box, plus so much more.  Even with all kinds of beauty products, jewelry cases, and designer mugs, my absolute favorite item was…mascara!  (I guess I am a low-maintenance girl after all.)  That’s the one thing I need in life right now.  (And a diet plan!) 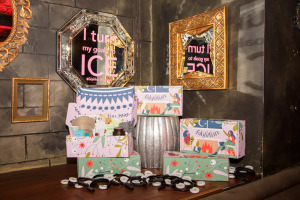 There were also tons of open Winter Boxes all over the club, and the guests were happily foraging through them.  (The only thing I wanted out of the boxes, though, was a “jade roller” for the face, but alas, they were already procured by others.)

I was actually not even expecting gifts this year because the invitation listed only the musical acts.  So I thought it was strictly a listening and dance party, without even any food.  I really should have suspected that there would be more to it because there always is with FabFitFun! 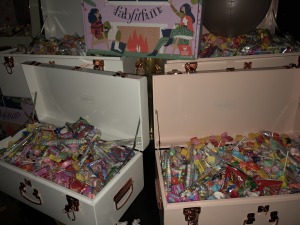 The treasure chests of candy. Photo by Karen Salkin.

Outside the room with the gift bags was a table of “pirate’s booty chests,” filled with all kinds of packaged non-chocolate kid-type of candy.  People were scooping it up by the handfuls.

Also up there were girls walking around carrying thin canvas bags which each contained a shirt with a choice of words on it, like “Brunette” or “Rose Okay.”  It turned-out that they were handing them out to the guests, so we didn’t have to wait in the at-that-point long line; it was so thoughtful of them to do it like that.

Actually, every single aspect of the event was well-thought out.  And they do it year after year.  I never know what to expect; each time is so different from the rest.  FabFitFun constantly surprises us, which I sooo appreciate.  I used to think that I was the best party planner in town, but these people have me beat by a mile! 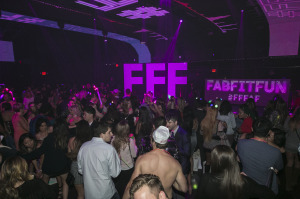 The crowd. Photo courtesy of FFF.

One thing I always love about their galas is seeing all the different fashions. It seemed like every young hipster in town was there, (and some old ones, too,) and it’s fun to see what everyone’s version of Saturday-night-at-the-club festive holiday attire is.  I saw everything, absolutely everything.  I’m happy to report that most people really dressed-up for the occasion, though.  The smartest chicks, (like moi!,) were in flats.  Boy, did they come in handy for all the stair-climbing and dancing.

I must also commend the decorating committee because, even though this was in a club, all the décor was color-coordinated. The flashing signs were in pink and blue, and there were colorful flashing wands all over, with similar big plastic light-up balls augmenting the grass-carpeted patio floor.  And they were smart to serve all the alcoholic beverages in colorful plastic souvenir cups, (as opposed to washable glass,) which they even emblazoned with their logo.  The whole dark nightclub was awash in color, which, trust me, I can tell you is a rarity in this town’s nightlife. 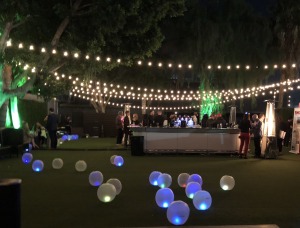 The patio. Photo by Karen Salkin.

The celebration also featured at least four bars, which were open all night.  There were so many, in fact, that there were barely any lines to get to them!

When we left, the crowd was enjoying some live music performances, but I had to be up at the crack of dawn for the next event of my glamorous life, so I had to leave the rest of the assemblage to it.

I thank FabFitFun for always giving me their next soirée to look forward to. And for their jam-packed-with-goodies subscription boxes, as well!