I never write about my friends’ private parties, but this one really merits it, so I just have got to share.

I really hadn’t realized just how big a deal the Beatles anniversary of coming to America was!   I loved them when I was little, and respected them my whole life, but I hate to admit that I don’t care about them much anymore, except as an institution.  (Someone asked me the other day what my favorite song of theirs is, and I absolutely couldn’t think of one! I know them all, just none is calling out to me these days.)  I think of them more as a legendary phenomenon than people I can really relate to anymore. So, the fiftieth anniversary of them reaching these shores wasn’t on my radar. 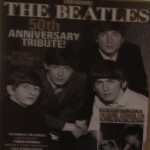 This past Sunday, February 9, was the anniversary of the night that they first appeared on The Ed Sullivan Show and all hell broke loose.  (But, as a former knower-of-everything-Beatles, I know that the real official Beatles Day is actually February 7, 1964.  And no one has seemed to mention that one.) I do love that the dates fell on the same actual days of the week that they did back then!

I was planning to ignore the day altogether, (except to record the television special that night, to view when the Olympics are over,) but then I got invited to the most interesting celebration of the day that anyone could be throwing: my friend, Debbie Supnik, was there from the beginning, so she and her wonderful husband, Paul, (not McCartney, so don’t get excited,) were having people over to their lovely Beverly Hills home to  “… join Debbie as she reminisces about being in the audience.”  What a brilliant soiree!  And it was executed to perfection! 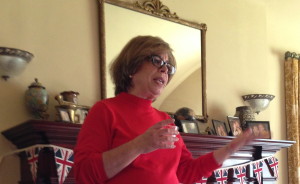 Debbie Supnik, (who’s so much cuter than this snapshot shows!,) regaling the assemblage. Photo by Karen Salkin.

But, of course, first I must digress to tell the magical way in which I met her to begin with.  When I was doing my show, Karen’s Restaurant Revue, I received a letter from someone at CBS.  When I opened it, I almost fainted–it was from a woman who worked there, (who turned-out to be Debbie, of course,) but the important part is that she was inviting me to the opening of a photography exhibit by none other than Michael McCartney!!!   She had heard me talk about my former intense love for his big brother, Paul McCartney, on my show, (when I was little, I used to bill myself as “Mrs. Paul McCartney,”) so she figured I’d be happy to attend.  Happy?! I was thrilled!

But alas, I was due to be in New York then.  Mr. X suggested I ask Mike to do my show, but I said, “Yeah, right, Michael McCartney wants to do my little cable show!”  When I told Debbie I’d have to miss his opening, she kindly said they’d take me to it when I returned.  And then she asked if Mike could do my show!!!  After I picked my jaw up off the floor, I immediately anointed Debbie my New Best Friend.

So, as long as I’ve known Debbie Gendler, (now Supnik,) I knew of her association with the lads from Liverpool.  But I never knew all the deets. I guess neither did most of her other pals because the turn-out for her afternoon shindig was fantastic.  It was packed!  And when she spoke, everyone paid attention!  No one had to be reprimanded (by me!,) for being rude.  We were all paying rapt attention.  Mr. X was enchanted by what Debbie had to say. 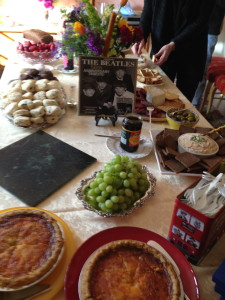 The elegant table set-up, not even with all the dishes on it. Photo by Karen Salkin.

But first things first; when we arrived at her fete, we met and mingled and ate.  The buffet was all-Anglo and fit for the Royals. It was set-up beautifully. Every presentation was attractive. I can’t tell you how impressed I was with it!  In the savory category, there were tons of home-baked quiches, shepherd’s pie, meatballs, salami, all kinds of cheeses, and many cracker varieties.  There were English touches, like some kind of jarred pickles concoction straight from an English shoppe.  And in the sweets arena, there were several tea cakes, British shortbreads, and, of course, the pièce de résistance, scones and clotted cream!!!  And let’s not forget giant strawberries and whipped cream.  I seriously didn’t know what to eat first!

Even the look of the table was perfect.  The centerpiece was a Beatles anniversary poster, and tiny “Christmas crackers,” (which aren’t food at all; they’re little tubes filled with toys and other goodies,) were scattered throughout. (And I thought I was cool, wearing vinyl record earrings, and a double-decker bus pendant, not to mention a peace-sign scarf to represent their later years!) 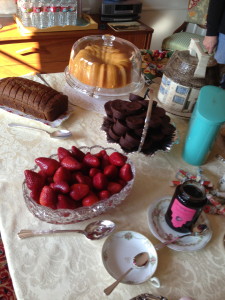 Just a few of the desserts. Photo by Karen Salkin.

On the coffee table in the living room were original Beatles mags, (that I would have never let my guests put their paws on!,) and copies of articles about Debbie’s association with the guys, including a very recent one from the NY Times. (I guess that’s almost as impressive as being written about here on It’s Not About Me!)

After the perfect amount of mingling, we all gathered in the living room to hear Debbie’s remembrances of the guys.  She was a teen-ager in New Jersey who wrote to an address on the back of a Beatles album someone had brought her from England, (before they were famous here,) which in turn led to her making the acquaintance of the grown-ups who managed the Beatles and their affairs, (business ones, not romantic ones…but you never know,) and becoming the figurative head of their American fan club.  And all this when she was just virtually a kid!

I’m not going to tell you all the fabulous stories she told, (get your own friend who knew the guys!,) but Mr. X and I are encouraging her to make a movie of her experiences.  (I just hope she hires us to write it for her!  Or at least lets me star as her back then!)  She’s a lot like me–she had exact dates and times and memories, which I really appreciated.  She made it all come to life for us. Debbie’s stories were vivid and charming and informative. So much so that I didn’t even chomp on a scone while she was speaking!

When I saw other celebrations of the Beatles on the news later that night, I was so happy to have been included in the best one. Even if I’m no longer “Mrs. Paul McCartney!”