Trending
You are at:Home»PARTIES»PARTIES: QVC PRE-OSCARS PARTY
By Karen Salkin on March 6, 2012 · PARTIES

I had attended this QVC soiree last year, in the rain, and even though it was very similar this time, everyone seemed so much more upbeat in this lovely weather. And we got to see the garden at the Four Seasons in Beverly Hills in all it’s non-muddy glory! 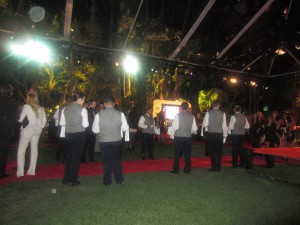 My guest had never been to this fete before, and, since she’s the friendliest person I know, in a good way, she ran around taking pictures of many of the guests’ stylish attire. As usual, I just remained low-key and observed my surroundings. [Note: For those of you who know me from my show, I’m not being facetious; unless I’m at an event of all friends, or a small dinner party, I like to stay quiet. I was the only person on my show, so of course I had to be my usual talkative self! There was nothing on there to observe except me! And Clarence, of course, but he was on for just a few minutes, much to most viewers’ chagrin, especially my father who would watch and say, “I thought the dog was on the show,” if Clar didn’t show-up early enough!] 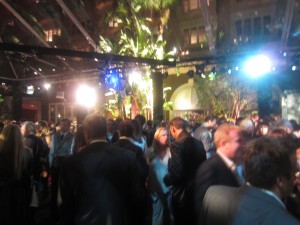 Anyway, the surroundings were beautiful, there was a cast of thousands, (or at least hundreds,) and the passed tidbits were tres generous, although there was not even one morsel, outside of the two desserts, that I eat. (It was the same menu as last year, so you think I would have known better and eaten before I arrived there. But how could I have known for sure? And, after a day of suites and services, who had time to chow down before this event?) 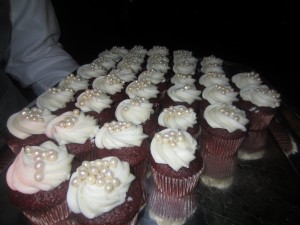 For the normal-eating guests, they served tuna tartare, crab something, salmon, caviar-topped blini, and grilled cheese with truffle oil (which thank goodness I remembered about in time to spare myself this year—I detest truffle oil, one of the most expensive culinary items.) And they kept them coming all night!

I was thrilled when I discovered the mini red velvet cupcakes and chocolate cakes, which were delicious. 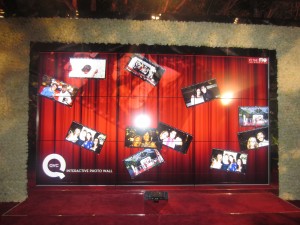 Can you find my pic on the board?

One of the fun features of this party is that photographers go around and take pictures of everybody and put them on computers for you to retrieve by emailing them to yourself. Or posting to Facebook or Twitter. Everyone seemed to be running around working those cell phones all night! Busy techies.

This party is known for their QVC celeb guests, and this one was no exception. I spied only one with my own eyes, but they flashed some of the others on the giant screen at the far end of the grounds. The one I saw was Cheryl Burke, two-time pro dancer champion of Dancing With the Stars, who was in the bathroom changing from her cobalt dress to a gold one, probably to model for the channel. She was telling someone that “Kim” went home because she had just flown in from QVC headquarters and was exhausted, rather than the buzz that she left because she was sick. I realized later that she must be talking about the poor, put-upon Kim Kardashian.

As we exited, we heard some guests grumbling about the absence of goodie bags this year, after getting spoiled by the stunning ones from last year. I was actually relieved they didn’t have them this time because if Mr. X saw one more gift come into the house this week, I think he was going to leave me. So, even that part of the QVC party was a success for me. Yay!