I’m sure that many of you already know that I don’t drink. That’s not out of a danger situation; it’s because I absolutely detest the taste of alcohol! (I know—I’m blessed, right?!) But, I’m not against being in a happening bar for a soiree. 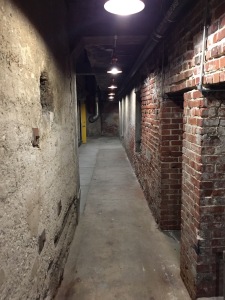 The alley leading to the entrance, which is marked by that yellow door. Photo by Karen Salkin, as is the big one at the top of the page.

So, that’s just what my friend, Alice, and I did recently for the opening of the hidden-in-downtown-LA Birds and Bees. Half the fun is getting there! I always love a “Joe sent me” kind of vibe.

It’s located at the very end of a huge parking lot downtown, downstairs, through a sort-of tunnel. The weird thing is that, despite the espionage to get there, it’s really attractive inside! I never got to the bottom of what was there before, but it must have been something nice because this place is far from the dive I was expecting! There are couches and other tables, including some high-tops. There are tons of long windows, (but don’t sit near one if it’s cold out. Alice and I were freezing! She was even eating and drinking with gloves on!) 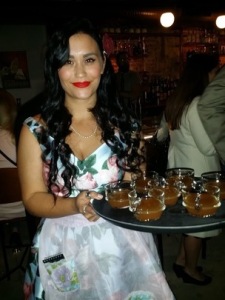 A waitress serivng an alcoholic punch. Photo by Alice Farinas.

I don’t know who will frequent Birds and Bees during normal business hours, but the opening night crowd was attractive and even nicely-dressed! The servers were dressed-up, as well, but instead of the little black dresses you usually see in cocktail lounges, they were attired in weird flowered dresses and red lipstick. I guess it was supposed to be an homage to some throwback era, but not one I recognized. Still, they looked nice. And were nice, which is of the most importance to me!

I can’t tell you about the actual cocktails because we didn’t have any, but everyone else seemed happy enough.

And this bar is smart enough to know how irresponsible it is to allow people to drink with nothing in their stomachs to soak it up! (Since I don’t drink, I never even realized the danger people were in with no food at all in the hip-hop clubs I was in charge of back in the day! We always went to “breakfast” when the clubs closed, but in the meantime, at least three hundred people a night were driving in the middle of the night after drinking for several hours, with no snacks even!!! How crazy was that?!) 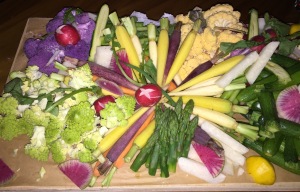 A colorful veggie platter. Just look at that purple and green cauliflower!!! Photo by Karen Salkin.

So, to prevent a repeat of those days, the party provided trays of vegetables and cheeses, bowls of popcorn, and a few other assorted snacks, like nuts, breadsticks, and yummy poundcake. I could have used some real food at the dinner hours of the fete, but I’m sure my body was happy that all I consumed for the night was veggies and nuts. And ever-precious water! (Okay, okay–I did sneak a bite of the poundcake.)

I was told that, since they don’t have a kitchen, there will never be any fare of substance there, but that there will always be some fun snacks, such as the delicious popcorn we sampled that night, Chex cereal mix, and even a nightly special cake! Good enough. I think most people will go to Birds and Bees mainly to meet and mingle; you can always go out to eat at one of the many downtown eateries before or after.

So, go have fun; just please drink responsibly (if there’s even such a thing.) And if there’s a guard at the yellow entrance door, just tell him, “Karen sent me,” instead of “Joe.”