This is the restaurant I was the most looking forward to for this entire trip!  I love an eatery with a special little twist to it, and this Charlie Palmer offering has a few.  First of all, I’m a fan of his former place, River Cafe in Brooklyn, and of Aureole, a current one of his.  Secondly, it’s located on the fourteenth floor (hence the moniker, Upper Story,) of the beautiful historic D&DB (Decorations and Design Building) which is open exclusively to design professionals.  Thirdly, they serve lunch only.  And lastly, at night, it’s a party space. 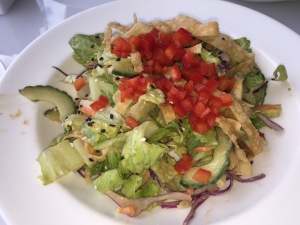 I’m sorry I missed the parties while I was in town, but I enjoyed the lunch that Lauren and I had in the mirrored and naturally-lit room, which featured impressive views of the city.

I have to tell you right now–this was one of the most delicious meals, from top to bottom, that I’ve had in a long while. We began with the Asian Chopped Salad, which was made-up of romaine, red cabbage, carrots, jicama, red peppers, cucumbers, chicken, and crispy wontons, topped with a peanut vinaigrette, which made it even more interesting. It was delicious, and the perfect choice for health-conscious peeps such as us. Lauren said that she “loved the crunch of the crispy wonton noodles, and the sweet chomp of red bell peppers, which went so well with the peanut vinaigrette.” 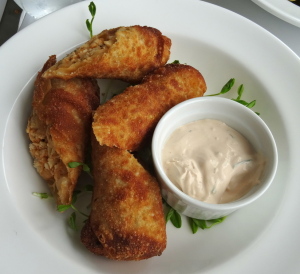 Southwestern Chicken Spring Rolls. Photo by Lauren Bennett, as is the big pic at the top of the page.

Then we moved on to the surprisingly scrumptious Southwestern Chicken Spring Rolls, which Lauren declared a “major yum!”  She really enjoyed the “succulent chicken pieces,” and that the rolls were “laced with chipotle chili spices.” I gobbled them too fast to even analyze any further, other than to notice that they were very crispy on the outside, (a texture I adore,) and uber-flavorful.

Everything was beautifully presented on the plate, none moreso than the entrees. Lauren’s choice was the Scottish Salmon. It was accompanied by wheat berries with charred scallions, and roasted artichokes. She noted that the salmon itself was “perfectly cooked,” which she’s (rightfully) a stickler about. She most notably appreciated the “delish sour yuzu emulsion that was drizzled over the hearty wheat berries.” 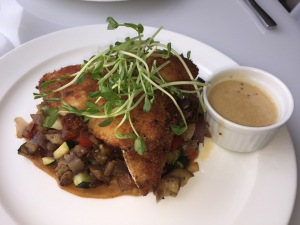 I was thrilled with my choice of the Panko Crusted Chicken Breast, which came atop a very thin layer of sweet potato purée, and lots of ratatouille. I begrudgingly offered Lauren a couple of bites of it, and she declared it to “melt in your mouth,” and be “a winner!” I thought it was downright delicious, especially due to the crunchy panko bread crumb coating on the chicken. It’s a special dish, one that you don’t often find at lunch time. And it was unbelievably filling! I could have eaten just this one entree, and been totally sated and happy. 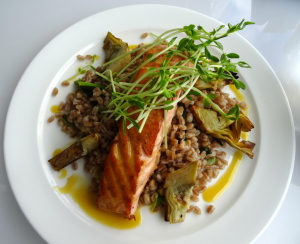 Although the menu is pretty limited, it does have something for everyone. In addition to the three “Mains,” there are plenty of salads and sandwiches. Who needs more than that at lunchtime?! And there’s a very interesting, lovely “Side”—a reasonably-priced half avocado! I was curious about it, (and I’m supposed to eat avocado for my health regime, but rarely remember to do so,) so, even though we were totally satisfied with everything else we tried, we just had to order the avocado, as well. It arrived prettily sliced, and when we asked if it comes with any dressing, (since seriously, we had never seen it on a menu before,) our obliging server, Yiani, suggested just oil and vinegar. So, that’s what we did, and it was perfect. What a simple surprise. I agreed with Lauren’s assessment that it’s “the perfect healthful side option.” 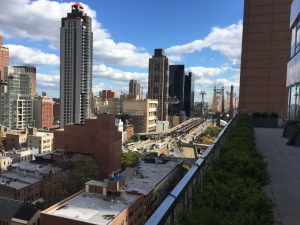 The view of the city from the terrace! Photo by Karen Salkin.

Upper Story’s only dessert is warm chocolate chip cookies, (which I believe are complimentary,) and Lauren deemed them “sinfully good!” I could have eaten a dozen of them—they were that delish.

We were there in late October, so, of course, we sat inside, but I have a feeling that it’s super-fun to sit outside in good weather. Yiani showed us around the entire space, including the view from the terrace, and, I swear, it felt like we were in a movie out there!

So, you know I’ll be returning on my Spring trip. And where to find me on the premises!