Out of my entire two weeks in New York this trip, my favorite restaurant has been TBar on the Upper East Side. By far. The entire experience was amazing, from top to bottom. We even appreciated that they dressed up the outside construction pipes, (the supporting poles of the temporary sidewalk-bridge,) to make a typical NY blight more palatable! How’s that for class?! 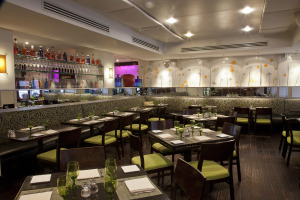 Part of the lovely interior. Photo courtesy of TBar.

When we met the owner, Tony Fortuna, I understood right away why he has such a nice staff; his pleasant demeanor is reflected in all of his personnel. We had not one lovely server, but two. Boyan and Chantelle could not have done more for us.

Since this is billed as a steak place, (but is so much more than that,) I decided to take a male with me. It’s always good to have some manly input on meat! So, my Greenwich, Connecticut eye doctor, Manny Greitzer, and I headed over there, and we were surprised to see how packed it was on what my mother would label “a plain little Monday night!”

The very first thing we noticed was the beautiful, very classy look of TBar. Manny said there was a “sophistication to the entire ambience.” He mentioned that even the men’s room was attractive! And I loved that a sporting event was on the TVs in the bar area, but that didn’t affect the peace of the dining rooms. 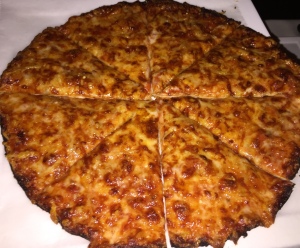 After we admired our surroundings for a bit, we got down to some serious fare. Manny, (who is the King of Alliteration,) said that the menu is “a stable of staple and simple selections, that are sensuously savory.” (And it took him practically no time to come up with that!)

We began our repast with the gorgeous and delicious Pizza Margherita. We really could have stopped right there, and been very content with our meal. But i’m glad we didn’t because then I would have missed-out on the Roasted Beets and Endive Salad, which featured goat cheese and pumpkin seeds. It was as healthful as it was tasty, and I was grateful to be eating something so good for me. 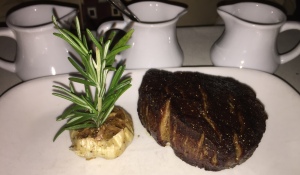 Filet Mignon, with the trio of sauces behind it. Photo by Karen Salkin.

Manny then moved-on to one of the signature Black Angus steaks, which all come with a trio of sauces. He chose the Filet Mignon, and declared it to be “wonderful!” He said it was “very tasty and tender,” and was happy to find that it was “not too over-spiced or salted.” He was also pleased to see that it was cooked just the way he ordered it, which does not always happen, even in fine dining eateries. 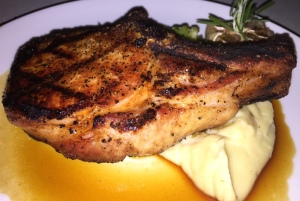 My Grilled Berkshire Pork Chop could not have been any more delectable. The accompanying apple glaze was mouth-wateringly good!

The two side dishes we ordered were also winners. Manny commented that the Sautéed Haricots Vert were both “crisp enough and soft enough.” And the Mashed Potatoes were great! Manny loved the “great creamy consistency, with no lumps.” 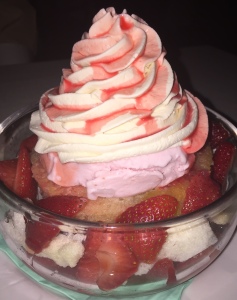 We were totally stuffed after all that, so we definitely did not need more than one of TBar’s famous desserts, but, for your sake, dear readers, we tried three! And boy, were we glad we did!!! You can order them as individuals, (which feed at least two, in my opinion,) or the gigantic “group” size, which is enough for…a big group. (Duh.) Either way, they are all gorgeous! The presentations alone are worth the calorie splurge.

We began with the most luxurious strawberry shortcake ever. It’s actually billed as a “Strawberry Sundae,” (with shortcake, ice cream, and meringue,) but is so much more than that. Manny’s favorite was the Chocolate Sundae, with ice cream atop a brownie; we loved the crunchy wafer-type ingredient in the middle of it. But, for me, the pièce de résistance was the Banana Parfait Milles Feuilles, with caramel sauce and coconut. I didn’t know anything could be so classy and so “OMG!” at the same time! (Except for yours truly, of course.) 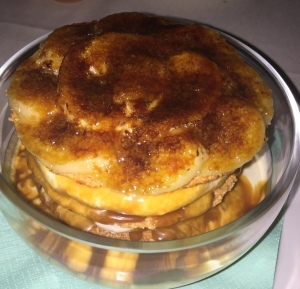 We had one more unexpected moment before we left. Manny was very surprised by how “fabulous” the decaf was! He said he’d never had any better. And, I swear, he’s a tough customer. He usually says everything is just “okay.” But we were equally impressed by TBar. I’m sure you will be, as well.