On my 2013 trips to New York City, I became aware of a new fun group of bars/eateries in the midtown west section of town, all being linked by some common owners. I had reviewed Ivy earlier this year, (which you can read here if you missed it: itsnotaboutme.tv/news/new-yorkdining-ivy-bar-nyc,) and really enjoyed it, so early in my summer trip, before my hands turned numb and I had to rush back to LA, I paid a visit to Social. 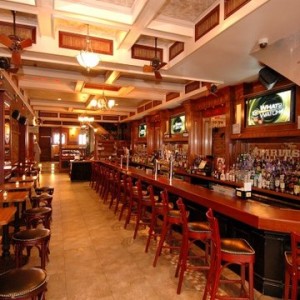 It’s mainly a sports bar, with giant TVs everywhere you look, a DJ rocking the house on Thursday, Friday, and Saturday nights, lots of fun cocktails, and a pretty big menu for a place such as this. The only thing that made me a little sad was seeing Derek Jeter on such a super-clear screen, which made me notice that he was finally looking like a grown-up. I could’ve lived without knowing that!

After working on my Brooklyn house all day, a casual meal at Social was exactly what my friend Lauren and I needed. But since there were just two of us, we couldn’t try as many dishes as we usually do for a review; still we found some fun ones to tell you about, anyway.

Before we get to that, I have to tell you my favorite part about this whole place. Social has so many different areas to have fun in! It’s three stories, so there are various party rooms for all sizes of social gatherings, (hence the moniker,) and there’s even an outdoor rooftop bar area, where I have a feeling all the hipsters congregate in the summer. Heck, I’d love to be out there in the Fall, and feel that crisp New York Autumn air!

I’m going to give you the highlights of our meal, but I have to admit something; because, as with all eateries that feature loud music, Lauren and I couldn’t really converse over dinner, so we couldn’t write down our actual quotes about each dish as we went along. So for the first time in a long time, I don’t have any of those to include in this review. Therefore, I’m giving you our overall impressions, without actual details of what we thought in the moment. 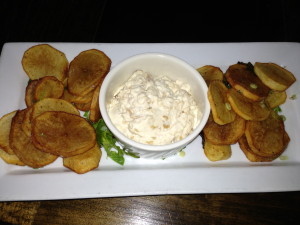 I was absolutely starving from all my hard work in the almost hundred degree heat that day, so we began with the first thing that caught my eye on the menu. It was a starter of caramelized onion dip with crispy house potato fries and sliced scallions, and it absolutely hit the spot. I had never seen anything like it before on any menu anywhere. What a great take on fries! I would’ve never thought to put these thick, round potato slices together with onion dip, but they worked in concert like a charm. I enjoyed them so much that they actually made me too stuffed for much else!

So, while I just waited for our burger, Lauren tried two other appetizers as her main meal, and she said both were delicious. The pulled pork sliders were a very generous portion of four of them and a serving of fries. That’s probably the best thing to order if you and your pals are on a budget. They can easily be shared. 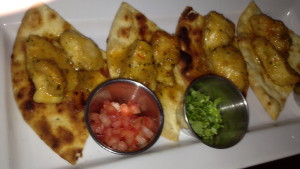 She also tried the chicken naan, which the waitress said is one of the most popular starters. It’s Thai style chicken in a sweet chile lime sauce, with avocado, red onion, and cilantro, served on charred naan-bread. That was Lauren’s favorite dish that night. She said that she loved the combination, and how the flavors blended together. 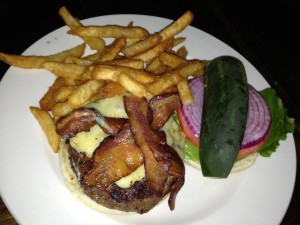 I was in a meat-y mood, so for our burger, I chose the Dubliner Irish one because in addition to the Pat La Frieda’s special blend beef it consisted of, (which is a big deal in New York,) it was topped with maple cured bacon. It was a delicious burger, and like everything else we tried, was big enough to share.

We were too full at that point to really enjoy any other main dishes, but when I found out that they don’t serve any desserts, we decided to try two comfort foods that we had heard were favorites at this eatery. (And I needed some comfort at that point because you all know that I really need a dessert! But thank goodness in New York in the summer, you can’t walk two steps without coming upon an ice cream truck, so my night was saved.) But neither of us were fans of the shepherd’s pie, and the macaroni and cheese is too rich for our tastes. I think if the latter had been ordered without eating all the food that we did before it, or eaten as a side dish to a burger, we would have rated it higher.

But overall, our time at Social was a good experience. We really liked the personnel, especially our waitress Grizel and the manager Mike, who gave us the grand tour at the end of our visit. And, of course, the cute and personable door guys! And we got to watch the Yankees win while stuffing our faces with some fun foods. I’d call that a successful New York summer night.