So, after a super-stressful two weeks of my mother being in the hospital here in New York, (where I’ll be until at least the middle of September,–New York, not the hospital, knock on wood,) my great friend Lyndsey came into New York for a day of semi-relaxation. She was taking me to Sunday brunch and let me choose the spot. I gave us several choices and we wound-up at Sette in Park Slope, partly because the brunch was a good price ($18.) and partly because they had an air-conditioned interior on yet another super-hot day.

The crowd was interesting; it wasn’t the bedraggled night-after-clubs peeps that I always love being a part of at places like Griddle Cafe in Los Angeles. Rather, they all looked like young working professionals who just threw on more casual dresses than during the work week, but still looked the part. All very civilized. 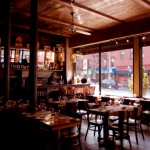 The service was practically non-existent, especially for not very busy an hour. But the non-chalance didn’t seem to be out of the usual server-snobbery; it was more like they just didn’t get it. Strange.

We shared four dishes and had basically the same opinions on all of them. The two appetizers had no taste whatsoever. They were like spa food–all healthful ingredients, but totally devoid of flavor. At least we were eating good food, which has been a rarity during my family’s hospital siege.

Conversely, the pizza tasted like a barrel of salt had fallen on it by accident. We actually liked it like that, after the bland beginnings. It was actually the most flavorful dish we ate at there, and we were grateful for the bit of pizazz to spice up our visit to Sette.

But the roasted beets with goat cheese and hazelnuts had neither goat cheese nor hazelnuts!!! We had to beg for some cheese and then just gave up on the nuts. Lyndsey even asked me if the cheese made the salad work more, to confirm her opinion that it didn’t, and she was correct. It needed a vinaigrette or something.

The same with the spinach salad. It contained poached pears, pecans, and gorgonzola, but again, the cheese and nuts were missing, along with any taste. My mother, who’s into flavorless food somewhat, would have loved this place!

So, after the disappointment of the appetizers, we got hopeful for the hot dishes because of the pizza. But then the baked penne with ground sausage was tasteless again. Go figure. How does one render sausage tasteless??? That’s an art.

We decided to not chance their desserts, and opted for the sure thing of Brooklyn Ice Cream Factory, which I think was the culinary hit of Lyndsey’s entire past year living in New York!

By the way, Sette’s brunch did offer unlimited Bloody Marys and Sparkling Wine Cocktails, which I’m sure is a bonus for most. But, since I hate the taste of alcohol, I just nipped at my peach cooler, and it must not have been great because Lyndsey, who knows her way around a bar, shall we say, did the same with hers. The beverages were such a non-issue that I actually forgot to ask her opinion of them.

So, this wasn’t a horrible brunch at all. It was more of just a waste of a week-end dining opportunity. But, at least now I can save you from wasting one, too!

I may be in New York for more time than planned, so if any of you have any tips of fabulous eateries here, or just want to ask me to scout a particular one for you, please let me know.