My recent trip to New York was a twelve-day whirlwind, highlighted, as I told you yesterday, by the birthday party that I threw for my little mother. There was so much I had to do, making it hard to just get out and relax. 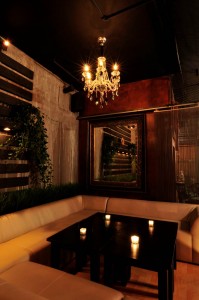 But I really wanted to have one hip night at an eatery, so I chose the almost eight-month-old Lair in Soho. It was near the location where Will Smith so rudely had parked his humongous movie trailer, with no regard to the neighbors, so I figured I’d witness his rudeness along the way. But the city had ordered it to be moved before I got there, maybe out of knowing that I, a visitor from the West, would need a place to park. Or not.

Anyway, Lair is more of a late night bar scene and private party venue, but my friend, Lauren, and I had to go early because we were due at a “powerful women” breakfast early the next morning. (We’re not the powerful ones—we were there to listen to the real impressive females. I’m planning to tell you about it tomorrow.)

Going early worked-out perfectly for us because they cheerily accommodated us by lowering the music so we could easily converse, we got to meet many of the personnel, including the chef, and watch some of an exciting NBA play-off game on one of the gorgeous big-screen TVs. Unfortunately, having the early morning wake-up looming over our heads prevented Lauren from sampling one of their signature cocktails, as she had already started on a perfect vodka martini straight-up before we perused the menu, and I don’t drink at all, so I can’t tell you about them first-hand, but the other patrons seemed more than satisfied with their choices.

I had already read the creative Asian tapas menu on-line, so I knew there wasn’t much that I ate, but I had been invited to a private party for an author that was being held there the next night and was feeling bad that I would have to miss it. So, I wanted Lair to be the one new restaurant/lounge in NYC being that I would try on this trip. And Lauren likes to eat healthful food, which this primarily is. And we’re both hip chicks, so this place was the perfect choice on many levels.

Shockingly, Lauren and I reversed our usual roles, with her going nuts over the desserts, which she usually eschews, and me winding-up being really into the tapas dishes that I tried. It was fun for us to step out of our usual mind-fixes. (It’s also surprising that I managed to try any food at all because the workers were so fun that I just yapped away all night! More on them in a second.)

I recommend beginning each visit to Lair with their Chinese chips, which, with three different varieties of chips and house-made duck sauce, is quite the bargain, not to mention a necessity as a go-with for the Asian-influenced cocktails. While the roasted bone marrow is a rare treat for people who love it, neither of us eat marrow, so we were wishing that the accompanying delicious scallion pancakes were a dish unto themselves. Vegetarians would go nuts over them, too!

Lauren also liked the crispy wonton rolls filled with lobster, bacon, and avocado, and loved the oysters on the half shell, that were paired with seared scallops. But her hands-down favorite was the chicken and foie gras dumplings.

I had two intriguing choices as my faves: the coconut bao bread with honey hoisin butter, which was perfect and delicious, and the crispy chicken skin that came with the chicken “pillows.” I’m ashamed to say that I love crispy chicken skin at all times, (probably the worst thing for you, health-wise,) but the rendition at Lair was even more mouth-watering than any other. I could have eaten a whole plate of just that one dish!!!

The best part of the food is that each order comes with enough for about four people, and everything is meant to be shared. I do wish that I had arrived with my usual posse of four, as well, because I would then have extra opinions to regale you with. As most of you already know, I’m not the most adventuresome eater, and Lauren’s almost worse than I am! But we decided to go out so last minute that I didn’t have energy to call on any of my other “junior reviewers.” Just trust me on how fun this food, and the entire ambience of Lair, is, and try it for yourself.

Here’s the funny part—the desserts are sort-of exotic, which means that I didn’t eat them. (I’m a basic chocolate and milk girl.) But Lauren, whom I’ve never seen eat dessert in five or six years of friendship, went to town on them!!! I loved that! Her favorites were the sorbets, in mango and honey apple, but she also loved the caramel apples/crispy plum one, and the home-made walnut-crusted marshmallows. My little mother and Mr. X would have loved that one, too.

At the end of the meal, we met Chris Cheung, the chef. He was fascinating—he grew-up near me, in Brooklyn, at a time when there were few Asians. So, he and I knew all of the old school Cantonese places, which I loved chatting with him about. Most chefs of Chinese food nowadays just don’t care about Cantonese cooking, so Chris was a refreshing change for me.

I met Michael, one of the two owners, for just a second, but he turned us over to Nicole Kelly, the server who really cared about serving! She couldn’t have been more pleasant. At my insistence, she brought over her fiancé, who’s also the bartender, Al Azemi, who’s really just a big kid from Bay Ridge. I loved talking to them both, and wish them so much happiness with their wedding, which coincidentally takes place on the one-year anniversary of Lair, October 15th. I’m just keeping my fingers crossed that Lair moves its celebration (which I’m assuming they’ll have) to another night, because I want to attend both!!! (Just kidding, though Nicole and Al are now my new best friends, of course.)

And, last but not least, I can’t forget about the ambience. The darkness is just perfect, sitting at the bar looks like tons of fun, and the three or four low-tabled areas are all inviting. No matter where you sit or stand, or what you eat or drink, or who serves you, Lair is sure to please. I’ll see you there in August!