Trending
You are at:Home»DINING»NEW YORK/DINING: IVY BAR NYC
By Karen Salkin on May 29, 2013 · DINING, NEW YORK

So, in the middle of non-stop work on my Brooklyn home, my friend Sheila, (who drove out from Ohio to help me…again!–have you ever heard of such a friend?,) and I needed a good meal out. But the basketball play-offs were on, and I had been missing the whole thing! Since we couldn’t take two breaks from our hard work, I figured that I could kill two birds with one stone by eating at the new Ivy Bar in midtown Manhattan. [Note: Do not confuse it with The Ivy, the mainstay of paparazzi in Los Angeles; they’re two totally different animals.]

Ivy had opened about two months prior, and was definitely in full swing by the time of our May 1st visit. It’s either a sports bar with good food, or an eatery with lots of big-screen TVs showing sports. Either way it’s a winner. 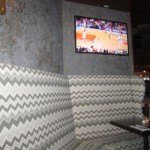 The view from my seat on the banquette. For much better pix of the space, check-out the photos on their web site. All photos in this review by Karen Salkin.

Most of the patrons sit at either the bar or high top tables in the main body of the place. But, if you want to be more private, there’s a comfy area in the back with a banquette all the way around and one centrally located TV. That’s where we sat because we were hungry and wanted to be serious about our meal. And because I didn’t want anyone talking while I was watching the Knicks! (Sidebar: this was actually the first the time I was able to watch food commercials because I had even better chow right in front of me!)

We had conscientious service from waitress Tyler, with side visits from the manger, Jacob, to make sure we were content. And to answer our many questions.

This is an excellent menu for a bar! It’s a real dining experience, not just some crummy fried appetizers, like most of the other sports bars I’ve frequented. Ivy is for people for want to have a good meal while watching their sports, not just throw something down their throats because they don’t have time to do both. And our new best pals, about whom I’ll tell you in a minute, recommended it for the cocktails.

But, of course, I have to go in order or our evening. As always, it’s hard to review with just two of us, so I don’t have tons of dishes to laud here. But what we had we were very happy with. 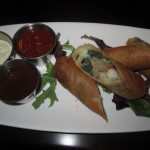 Sheila and my favorite appetizer was the unique Steakhouse Springrolls. They were what Sheila deemed “robust meat,” mashed potatoes and creamed spinach in…a crispy springroll wrapper!!! She said it was an “unexpected combination,” and was absolutely delicious!!! We both agreed that they’re a must!

We moved on to the Farmer’s Chopped Salad, which was not only beautiful, but had an “excellent texture and crunch,” with “some subtle tastes.” Sheila is the expert here because she’s the one who taught me to crave different textures with each bite. (Example: my ice cream always has to have something to bite into in the mix, ala Rocky Road.)

We were seriously full by now, (especially because we just had to stop at my favorite place on earth on the way–the just-that-week re-opened Brooklyn Ice Cream Factory! It had been closed since this Fall’s Hurricane Sandy, so I had to take every opportunity I had to get that ambrosial substance!) But Ivy’s menu was so appealing that we wanted to try more.

They have hearty specialty sandwiches along with steakhouse-worthy entrees, so we went with a little of everything. We were the most curious about the Pambazo Mexican Sandwich, which is a combo of chorizo, chicken breast, crisp potatoes, shredded lettuce, cotija cheese, onions, pickled jalapeños, sour cream, and pico de gallo on ciabatta bread! Have you ever heard of such a sandwich???!!! We all loved it! And I say “all” because by now, our new pals had joined us.

So, here’s the digression to explain that. This story shows how social a place Ivy is; I wouldn’t feel comfortable doing this just anywhere. We noticed a female duo at the table next to, yet across from, us because they were sitting right under the TV I was watching. They looked very business-y and classy, and Sheila asked if I thought they were business associates. (I think that’s what she thought because they both looked at their phones occasionally, without apologizing to the other about doing so.) At the end, I turned into my own mother by asking Jenna, the younger one, if they were mother and daughter. And I was correct! (Did you doubt it for even one second? I thought not.)

While we were admiring their cocktail choices, they were doing the same with our food ones! So, I invited them to join us for dessert, which they had eschewed because there are only two basic ones, which didn’t seem that interesting to any of us. (But, of course, I had a trick up my sleeve. A good one, not a sneaky one.) But our entrees arrived during this repartee, so they took some bites of those, too, to give me some other opinions to share with you. 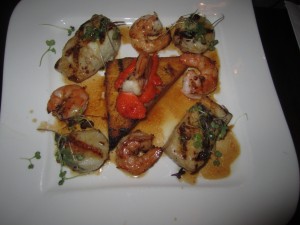 So, back to the food. Sheila and new bestie mom, Robin, worked on the Mixed Seafood Grill with grilled polenta. Sheila, not a fan of usual polenta, loved that this one was sort-of “crispy,” and she finished the whole thing! (Over several days, though.) The seafood consisted of scallops, shrimp, and mahi mahi, and the ladies loved them all.

I had the Hangar Steak, which was delish. And a very generous portion! With three of us working on it, we couldn’t finish it! Robin and I went nuts for the creamy mashed potatoes that accompanied it. I was thrilled that they weren’t truffled, like they are with some of the other entrees. I’m sure you can request them either way. 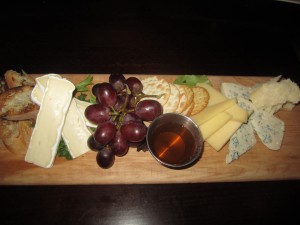 The gorgeous Artisanal Cheese Selection! (The olives are not in the pic because, being not an olive fan, I had them put on the side.)

We still found room for dessert, but it took all four of us to work on the two the restaurant knew they served, plus the one I ingeniously ordered as the final course: the Artisanal Cheese Selection!!! It’s listed as an appetizer, but I knew it would work for dessert. Better yet, if you just stop into Ivy for drinks and appetizers, this is the perfect platter. It consists of several types of cheese, (that work really well in concert,) grapes, nice crackers, grilled baguette slices, citrus marinated olives, and honey. All four of us sang its praises.

The other two sweets were less special, but Robin and I did enjoy the basic cheesecake, while Sheila and Jenna seemed surprised at how much they liked the chocolate mousse cake. Sheila actually loved it! They added the perfect touch to the evening. (The desserts, not the people. Well, actually, I guess our new BFFs did, as well!)

But no worries–you don’t have to pick-up strangers to enjoy your experience here! And then you’ll have more of the delicious fare for yourselves! You’ll win, either way.