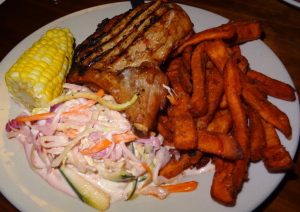 The pork chop, which I just had to give top billing to! Photo by Lauren Clarke-Bennett.

Last week, I attended a cocktail party thrown by Global Lyme Alliance to raise funds to fight the deadly Lyme Disease, which one of my best buds has. It was at Cipriani on 42nd street, and the look of the room (designed by Lawrence Scott,) was absolutely stunning! Unfortunately, there was nothing I could eat. And my black tie shoes were killing me! So, in need of some good old-fashioned comfort food at that point, my friend, Lauren, and I l headed over to Good Enough To Eat on the Upper West Side. My feet needed that experience as much as my stomach! (We stopped at her place on the way, to get into comfortable attire, and, having no shoes of hers that fit me, she gave me adorable slippers to wear, that look like Little Lulu sneakers! I’m glad that GETE made me comfortable enough to show up in them! 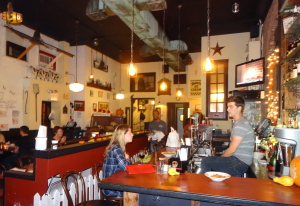 We were greeted by darling general manager, Rashad Carter. Of course he’s darling—we have the same birthday!!! (I love fellow Capricorns.)

I had been to this eatery once before, many years ago, for some delicious pancakes, but didn’t recognize it now. It turns-out that that’s because they had moved to this new happening Columbus Avenue area a while ago, since my previous visit. It’s the same food, just different everything else. 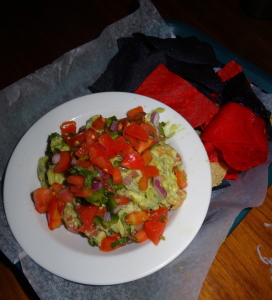 The guacamole. Photo by Lauren Clarke-Bennett.

Lauren chatted with the bartender, (who she said was “so cute,”) to decide what to drink, since Good Enough To Eat is also known for their fun cocktail menu. They came up with a Chopin (potato vodka), chilled, straight up in a martini glass, with no fruit, and she told me it “hit the spot!” With that good omen, we then settled in to eat.

As Lauren pointed-out, the food is all homemade. There are no shortcuts with any industry pre-made helpers here. She said, “You can tell, even if you didn’t know.”

We began our dinner with the delicious guacamole. It had a very flavorful surprise in it—finely chopped jalapeños! But they didn’t make it too hot for wimpy me—they just added some zest. And crunch, which I love. I appreciated that it comes with multi-color chips, too. 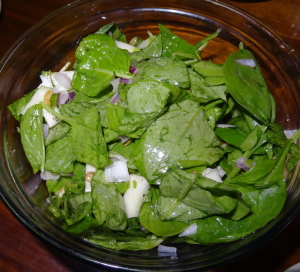 Then we moved on to the spinach salad, which we both thought was excellent. It featured Granny Smith apples, toasted pumpkin seeds, and green peas. (There’s red onion, too, but we liked it better without. This is one salad that does not the need the crutch of onions!) This is a great choice for health-conscious peeps.

I swear, that would have truly been enough for two normal people to eat, but I really wanted to try their pork chop. I chose to forego the barbecue sauce that it’s served with, but it was so flavorful that I can’t even imagine it not bare. And the sweet potato fries that come with the chop were spot-on! Very crispy and crunchy on the outside, and tender on the inside. Really, they were just perfect. 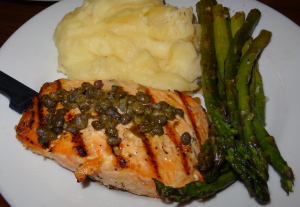 Even better were the absolutely incredible mashed potatoes that came with Lauren’s grilled salmon, which was one of that day’s specials. We both loved, loved, loved those potatoes! The grilled asparagus that was that’s day’s featured vegetable, was also delish. (Actually, everything at GETE was!) Lauren said that the salmon was a “hearty piece,” and that she loved the “sourness of the lemon white wine caper sauce” that was over it. 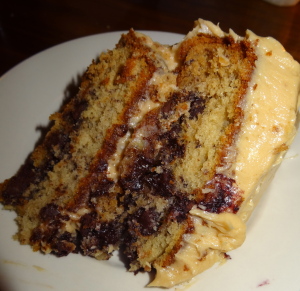 We were totally stuffed by then, but did you think that I was ever going to eschew dessert? Especially when the featured one was on the more healthful side? It was banana chocolate chip cake with peanut butter frosting, which is always the perfect combo. (When I used to drink milkshakes, those three flavors are the combo I always chose.) Lauren said it was “really interesting,” and we agreed that it tasted even more homemade than all the other dishes! It reminded me of a cake kids make with their mothers. I’m sure I would have done so, if my mother ever baked. Or cooked! (Instead, she taught me how to eat at restaurants several times a week, for which I really am eternally grateful.)

We appreciated the very easy parking around there, and also that the staff, including our waiter, Theron, never rushed us, even though we were probably the last patrons to leave. The atmosphere invited us to linger over our meal, and then some!