You may think this is an odd “National Day” for me to celebrate, but there are a few reasons why; it’s not just because we’re both gingers, (although her orange-red locks outdo my auburn by a mile.) 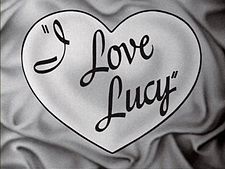 I have to say right up front that I was never a fan of this show.  I Love Lucy always made me nervous—situational scrapes have never been to my liking, (unless, of course, Gale Storm was in them! But that’s another story.)  Ergo, I was not a Lucille Ball fan.  Truth be told, I used to think of her as annoying.

But then people in my native Brooklyn who knew of all the crazy situations I got myself into as a teen started calling me “Juicy,” for “Jewish Lucy.”

The similarities between us didn’t really come totally home for me until this happened:  I had already done one episode of the early Fox network sitcom, Open House, and then had to turn down another episode or two because I was doing other shows at the time.  (Yes, I did used to have an interesting and semi-wild acting career before I traded it in for this one in media, although I’ve been considered an “influencer” in both!)  But then the producers called me and—I’m serious about this—practically begged me to play Lucy on that week’s show.  I took it as a great compliment, and, of course, said yes. (You’ll find-out just why they were so adamant in a minute.) 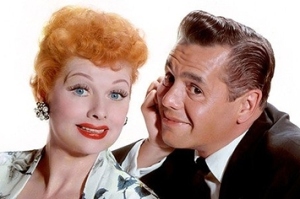 When I got to the table read, I discovered that the story that week was centered around the late great impressionist, Danny Gans, who was a regular on that series.  The storyline for that episode was that he was having a party, and all of his pals were also impressionists!  So rather than hire actors to play the friends, they hired all real impressionists, including people who did Joan Rivers and Robin Leach.  And they needed a Lucy to Danny’s character’s Desi.  So auburn-tressed moi got the call.

But when I asked my fellow guest cast members why the producers didn’t just get a Lucy impersonator for the role to begin with, (as opposed to me,) they recoiled, and, to a person, told me that “no one does Lucy!”  So I had the hardest job of all of them!  But I didn’t know that when I accepted the job, of course. 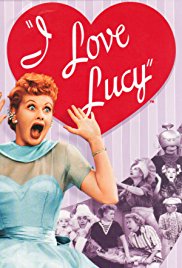 However, it was tons of fun.  I even got to do Lucy’s famous, “Waaaaahhhhh!”

Adding to that fun was that I was re-united in a show biz gig with Jamie Alcroft, who played the Robin Leach character interviewing Danny and my “Lucy and Desi,” for the first time since we had both appeared on the same Tonight Show a few years earlier. Jamie was on there as a comedian with his partner, Mack, and I got the “starlet interview position.” (I was just grateful that I wasn’t booked as a “human oddity!”)

Here’s one amusing thing that happened on that Open House shoot. The hair people wanted to make my hair redder, even though it should not have mattered since I was playing someone who was not really Lucy. So I volunteered to bring in a colored hair mousse of mine, which I had used only once because it was too orange for me. 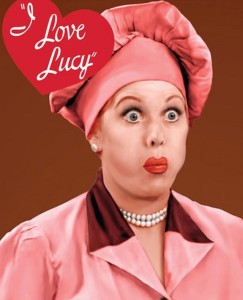 I still am confused as to why a professional hair person didn’t know to put just a dollop of mousse in my hair before she blew-out my clean mane, but she did not. What she did instead was paint the product in, as one does with hair dye that gets rinsed out, and it was so thick and wet that it made my hair absolutely filthy and disgusting and matted down. And it weighed about ten pounds!!! It definitely ruined my acting mojo. (But it was a scrape—just like one of Lucy’s—so maybe it actually improved my subtext.)

And ever since then, whenever my tresses have come out particularly red, (usually due to a coloring accident,) Mr. X always looks at me and says in his best Desi accent, “Loooocy!”

So, after walking a mile in Lucy’s shoes, I finally learned to embrace her and her former show. 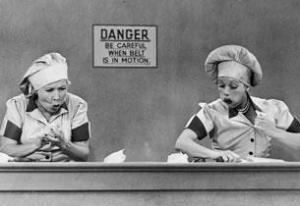 Now, when people laugh at all my crazy escapades, and label us “Lucy and Ethel” when I get into entertaining scrapes with various friends, I understand and appreciate.

So, to all my fellow gingers out there, and fellow comediennes, and just any of you who are I Love Lucy fans, I wish you a very Happy National I Love Lucy Day! Just don’t try to package chocolates, crush grapes into wine, or sneak into the Tropicana Club in disguise, to trick your husband!