Today’s National Day is an odd one—it’s Name Yourself Day. No one gets to do that, really, outside of children of hippie-esque parents who feel their children should get to choose their own names. 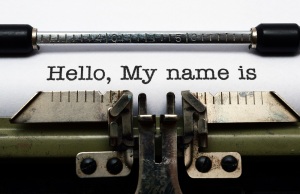 The old school way to name yourself!

I’ve known a few grown-ups, from twenties to seventies, who have actually changed their first names after everyone already knew them. Most were hard for me to adjust to, except for one: In my twenties, I met Alice, who quickly became one of my favorite friends ever. I had never known anyone by that moniker, so I loved it. It was as simple as she herself was beautiful, in every sense of the word. But when she soon changed it to Alicia, I instantly went with it. That tiny change did really did fit her a bit better—Alice was too plain for one of the most wonderful beings on earth. (And now in heaven.)

Here are some of the other name changes I’ve encountered through the years: Abby (such a cute name) became Shannon, Carol became Toby (strange choice,) and Laura chose to be known as Marjan!!! (Yes, that one was sort-of nutty.) The oldest woman’s change I’m aware of is when Ursula became known as Elizabeth. I had known her for soooo many years at that point that I actually thought she was joking when she told me. Why change an exotic name to a regular one? She was sooo well-known as Ursula then that changing her name was a brave choice, but I just have not been able to get fully behind it. Her husband of a thousand years always adorably called her “Ursi.” I loved it! But when you’re not happy with your name, what are you going to do?

On the flip side, I’ve never wanted my name to be anything other than Karen. I’ve always loved my name. When I was doing my TV show, Karen’s Restaurant Revue, I adored that people didn’t even really know my last name—when anyone said, “Karen,” in LA in those days, everyone knew they were talking about moi! Good times. 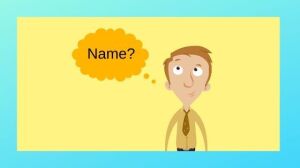 Have you ever thought of what your name should really be?

But it’s been semi-ruined for me this past year, because of the idiocy of calling rude, entitled women by that name. It’s insane. (Here’s the history of that lunacy, in case you’re wondering about how it got started: itsnotaboutme.tv/news/karens-rants-why-is-karen-a-bad-word-now.)

Even with that bit of tarnish on it, I still would not change it. On the other hand, I’ve always hated my middle name. So much so that I’ve even tried to have it expunged.

It’s actually a very famous name now–not in the infamous mode of my first–but that still doesn’t make me like it any better. When people who knew what it was used to ask me why I hate it, I’d always say that it sounded like a fat girl. And in recent years, I’ve been proven correct.

I don’t even know where my parents got my middle name from. In the Jewish religion, you have to name babies after someone who is deceased in your family. So there must have been someone in my family with at least a version of what my middle name is, although I never heard of her.

So if I “named myself” today, I’d make my middle name Victoria, after my father’s sister who died when she was a teenager, after a “friend” hit her over the head with a lead pipe. I’ve always thought I should have been given her name as my middle one to begin with. I think that “Karen Victoria” sounds regal, probably because it sounds kind of like “Queen Victoria.” Duh. (But I think that you’re not supposed to name after someone who died young, which is why I didn’t get that one.) 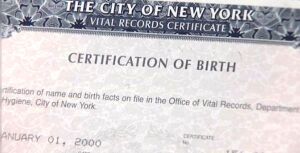 NYC birth certificate, with at least my correct birth month.

Actually, here’s one more strange fact about my name. I had never seen my birth certificate, leading me to believe that I was adopted, which I would have been very happy with, by the way—I’ve always hoped that I had a twin out there. When my mother finally found it, I was shocked—there was no name on it, other than my last!!! But “Karen” was handwritten on the back, with an official stamp, a month and a half later! And no, they didn’t call me just “baby” until they saw what I was showing them what my name was, as some free-spirited parents do today. My mother said they always knew I was “Karen,” but somehow, it didn’t get officially recorded for all that time.

And here’s another interesting tidbit: I did get to give myself a code name when I was a teen-ager. My best friend and I told strangers we were Priscilla and Gertrude. I was Priscilla, of course! (You didn’t think I’d choose the other awful name now, did you?!) We thought it was so funny, and loved seeing their faces when we uttered those crazy names. 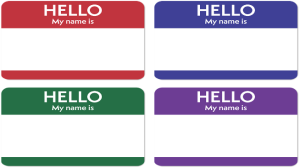 With these, you can choose your name and your color!

If I got the chance to name myself today, I think it would be Crayon. I’ve flirted with changing it to that for many years now. (If you missed my article on why that is, you can still read it here: itsnotaboutme.tv/news/national-day-happy-national-crayon-day.)

And here, you (and I!,) thought I wouldn’t have much to say about National Name Yourself Day—how could we have ever doubted it?

I don’t know if this National Day is exactly one to celebrate, but I wish you a fun one. And if you do decide to “name yourself” today, please share that decision in the Comments below. I’d love to see the choices. Just do yourself a big favor—don’t name yourself “Karen” this year!!!