HAPPY NATIONAL RECEPTIONISTS’ DAY (WITH MY LATEST VIDEO ON THE SUBJECT)

Even though I always loved pretending to be a receptionist when my friends and I would play dress-up as children, (along with being a teacher and model, of course, both of which I became when I grew-up,) I’ve rarely been a front office person in real life.

I can think of only three instances, actually. For the story of the main time I was a receptionist (for an uber-short period of time,) here’s my newest YouTube video explaining that crazy job I had for two producers: www.youtube.com/watch?v=2izyylAPII4&t=3s. 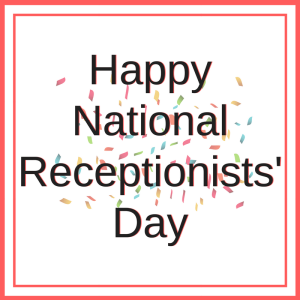 So that was the first time I was a receptionist, with not fabulous results. The second time was when a friend who was the sole worker for a podiatrist wanted to take a vacation, so she asked me to fill-in for her for a couple of weeks. The weird thing is, because I was so young, and she gave me her nurses uniforms to wear to work, I actually thought it was a nursing job! I had no idea what I was supposed to be. But, since I’m not a nurse, (obvi,) I guess I was just a glorified receptionist. (Part of that story is told in my National Nurses Day video from last week. In case you missed it then, here’s that link again: www.youtube.com/watch?v=5cQz5JjUceM&t=2s.)

The third time was also medical-related. But it was more a fun thing. I was friends with my “Chiropractor To The Stars,” and since he was between wives, (hence, I think he was a tad lonely,) and trusted few people, especially his patients, he took me out to lunch whenever I showed-up for a treatment. And then one day at lunch, he asked me to work for him a couple of afternoons a week. I really don’t think he needed anybody there; he even said it was his excuse to spend more time together.

Let me make it clear—I don’t think there was any crushing going on there. There was definitely none on my part. And I could usually tell who was into me in those days, and this guy’s behavior did not fill that bill. I really do think he was just craving honest, uncomplicated, fun female companionship. 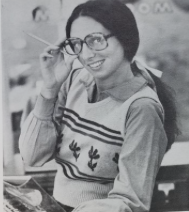 Karen Salkin back in the day, channeling some kind of working girl for her commercial composite! Photo by Herb Weil, (of course! Who else?)

So I figured why not? I always liked to have extra money, and again, I had been playing “receptionist” ever since I first played house in my basement! And, of course, the deal came with free lunch. What could be bad?

Mr. X, (who was already my boyfriend at that time,) thought it was not a great gig—he thought there were much better uses of my time. This was in the early days of my TV show, and I was basically the “it” girl around town, and he thought I needed to capitalize on all that. (He was definitely correct about that—I never lifted even one finger to work on my show biz career! Hence, I helm this e-zine now and don’t do on-camera work anymore.)

But, I took the gig anyway because it was fun and so not a part of real life to me—it was like playing dress-up.

But, as I said, his patients were practically all in the business. And it turns-out, I had worked with many of them! After about a month of actors, producers, casting directors, etc., coming in and seeing me, and saying things like, “Karen? This is what you’re doing now?,” all in totally condescending ways, I had had enough. I had tried explaining that the doc and I were friends and I was just helping him out, but their faces and voices told me they were looking down on me. I guess in show business, perception is everything, so I, sadly, had to quit.

No biggie, though. The chiro went on to marry Cybill Shepherd in short order, (which actually means he still did not have fun female company!,) and my time got freed-up to…be taken out to lunch by multitudes of other dudes! 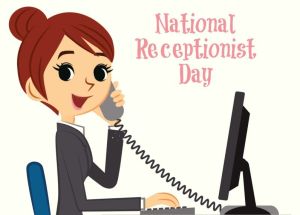 What Karen was trying to look like in her commercial composite!

Okay, this is not at all how I had planned to celebrate receptionists in writing today, but, as with all my articles, it just developed as I went along.

Oh wait—I just remembered—I played a receptionist in a movie! That’s such a funny story. I wish I had thought of it when I did my YouTube video on the topic for today! Maybe I’ll tell it in another one down the line. But all I’ll say for now is that the producers never sent me the complete script, just my own scenes, and when I arrived on set, I found-out it was basically…softcore porn! I think I was the only one not having sex in the film! (But it starred some famous people, so go figure.) [Note: In case you’ve never seen me, there are still shots all over the internet of an Afro-American lesbian in a scene from this film, which erroneously label her with…my name! I’ve tried to get them removed for years, with no luck. But that is definitely not me. I’m the fully-dressed little white girl behind the reception desk in the movie, the title of which I’m definitely not divulging here!]

And wait again! Mr. X just reminded me that I played a receptionist in another movie, too! One with Alec Baldwin! The entire experience was so not great that I begged the producer to cut me out of the film. And…he did! And you know what? That producer was the same one I had worked for back in the day, about whom I speak in that newest video of my very first job as a receptionist! Wow. Full circle, which did not hit me in all these years until this very second. (Here’s that link again: www.youtube.com/watch?v=2izyylAPII4&t=3s.)

So let me end this little tribute to the profession by stating that I am in awe of all the people who can handle front office duties adeptly. So to all of them today, I wish a very Happy National Receptionists’ Day!