Trending
You are at:Home»MUSIC»MUSIC: ROBIN THICKE CONTROVERSY
By Karen Salkin on July 1, 2013 · MUSIC

Okay, it’s time to weigh-in on this Robin Thicke controversy. It seems that everyone’s upset about his latest ditty, Blurred Vision. And about the video even moreso!

And I do sort-of agree, though I can never make-out most lyrics nowadays, so for all I know, every song might be offensive! And as to the music for it, I loved it when it was out the first time—as Marvin Gaye’s Got To Give It Up, which actually sent a similar message!

But this video features half-naked women (while the men are fully-clothed) and hints at bestiality! No lie. It all does look kind-of disrespectful, in addition to, or despite, the lyrics!!!

The vid, (and track,) features Robin and his co-horts, Pharrell and T.I., (does anyone in the music business have a normal name anymore?,) cavorting with a trio of half-naked models. And Robin keeps whispering in their ears, “You know you want it,” which is the crux of the criticism for the song. That might be talk that turns couples on in bed, but it’s also possibly something that rapists think, especially in date rape situations. So, I can agree with that criticism of the whole debacle. 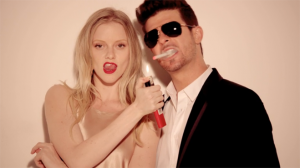 But I find a host of other problems with the video, as well.

On the shallow side, I have to agree with something Mr. X pointed-out–it does bust the myth that all black guys can dance because T.I. is brutal! Even his brushing of one of the models’ hair is goony. His moves are the opposite of sexy!

Speaking of sexy, you know a white boy is when black chicks think so! And that’s the case with Robin Thicke.

I was the last one on the Robin Thicke bandwagon. I didn’t get it. I think that his thin, latin-lover ‘stache turned me off. Or perhaps the fact that when he repeatedly sang the refrain “lost without you” on his first hit of the same name, it sounded like he was saying “Sasquatch” to me!

But then I got with the program, and I actually started to respect him when he was one of the mentors on the singing competition show Duets last summer. And I felt a tiny bit bad for him because, since he had the weakest actual voice on the show, (the other judges were John Legend, Kelly Clarkson, and the ultimate winner, Jennifer Nettles,) he seemed a tad insecure. No one could really do a respectable duet with him, so his contestants got eliminated pretty fast. (It didn’t help that he chose two women for his team who couldn’t really sing. At all!)

But then he said a line that Mr. X and I loved so much, which made me us really like him. (When Jennifer was performed on the show shortly after she announced that she was preggers, Robin gave her props for “dropping it like it’s hot, even with a bun in the oven.” )

And seeing pix of him with his adorable little son helped, as well.

Then I saw him perform during a Fashion Week event last Fall, and was thrilled. I bumped into him on the way to the after-party, and lauded him for his great line, which evoked hearty laughter from him, and he was adorable to me. But then he instantly ruined his whole image for me because I noticed he was smoking a cigarette!!! A singer, smoking. More importantly, a father smoking!!! How terrible of him!

So, as much as I do understand the uproar over the “rape-y” lyrics of his Blurred Vision, worse to me is that he lights up a cigarette in the video for it!!! You know idiot young people will want to emulate a sex symbol guy!!! (And research just came out showing that seeing just ten ads for tobacco can increase a teenager’s risk of taking-up smoking by almost forty per cent; I would think that applies to all tobacco visuals, since there are few types of cigarette ads anymore. So, seeing a famous music guy light-up cannot be good, for anyone.)

Another thing I hate about the video, although not offensive, (but it’s semi-nauseating to me,) is the fact that Robin is wearing clear nail polish in it! I, of course, admire a male who is aware enough to have groomed nails, but polish on a man just makes me queasy. Unless it’s dark and on Adam Lambert!

My last thoughts on Blurred Vision: The Daily Beast reported that, in an interview with VH1, Robin said, “We pretty much wanted to take all the taboos of what you’re not supposed to do—bestiality, you know, injecting a girl in her bum with a five-foot syringe—I just wanted to break every rule of things you’re not supposed to do and make people realize how silly some of these rules are.” Silly??? Laws against bestiality are silly??? This guy is not doing himself any favors. He needs to stop talking, stop making sexist records and videos, stop rocking clear nail polish, and most of all, quit smoking! And then maybe, just maybe, he can go back to being sexy. And darling, in my eyes!

Okay, since I wrote all of the above, I’ve now seen the nude version of this video! OMG!!! It’s seriously degrading to women! The three girls are naked, (except for tiny flesh-colored g-strings,) while the males are fully dressed!!! So insulting to women! Much worse than Robin’s polished nails and T.I.’s awful movement! I am offended!

And it’s downright creepy that there’s a big sign declaring, “Robin Thicke has a big dick!” If that’s the case, how come he’s not naked in the video, instead of having those girls be the only ones to prance around with their private parts bopping to the music?

I read somewhere that one of the guys declared that the action in the video is okay because they’re all married men. I can promise you that if I was one of their wives, that would not be the condition for long.