Trending
You are at:Home»MUSIC»MUSIC: NOELLE HANNIBAL AT GENGHIS COHEN 2017
By Karen Salkin on November 8, 2017 · MUSIC

I was so happy to see (and hear) my friend, Noelle Hannibal, perform in the now-famous Genghis Cohen Music Room this past week-end. I had attended her previous appearance there, but that was two and a half years ago, so I’m glad that Angelenos got this second chance to see her.

Noelle Hannibal (in the center) in Hair in Montreal.

The reason it’s been so long between gigs for her is that…she lives in Montreal! And she’s just about single-handedly bringing Broadway shows and experiences to that French-Canadian city! (That assessment is mine, not hers, although I have a feeling that she would agree…but in private!) She produces (and stars in) Broadway shows there, such as Hair, Chess, and Tommy. On top of that, she brings in Broadway stars, like her pals Michael Cerveris, Adam Pascal, Kyle Dean Massey, and Andrew Chappelle (from Hamilton) to do master classes!!! What a gal! Those Canadians are lucky to have her there! 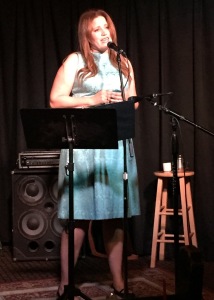 But back to us lucky SoCal peeps! Noelle really knows how to put on a show, even with a sore throat from screaming at Disneyland. (She fulfilled a dream by going there on Halloween, which was just a few days before her appearance at Genghis.)

Her set list wasn’t long enough for the assemblage, who couldn’t get enough, but them’s the breaks. She had to adhere to her time slot. But what she did sing was all fun and excellent. Noelle always chooses sort-of obscure songs, many from shows no one’s ever even heard of; most of them are recent musicals that just didn’t catch on. It seems to be one of Noelle’s missions to keep their names alive.

Her choices are always interesting or beautiful or at least compelling. I didn’t know even one of them this time, but I especially enjoyed So Big/So Small from Dear Evan Hansen, a musical I had no interest in seeing until I heard Noelle sing this song! I also really enjoyed Just A Housewife from Working, and It All Fades Away from Bridges of Madison County. 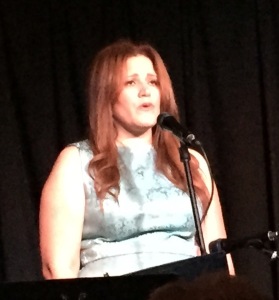 Let me tell you—there are few people who love Broadway musicals more than Noelle Hannibal! And her love of them is infectious—the entire audience at Genghis enjoyed all that she was putting out. No one wanted to leave. So she did exactly what a performer should do—she left us wanting more.

I have a feeling that Noelle will be back here in Los Angeles before another two years are up, (at least I hope so!,) but until then, no matter where in the world you are, (but especially for those in Montreal,) I suggest that you check out her website below to keep up with all her musical endeavors. 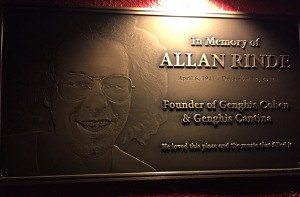 The plaque tribute to Allan Rinde. Photo by Karen Salkin.

I have to add one little thing about the venue. As we were waiting to go into the show room, and were chilling in the intimate bar space between the restaurant and the Music Room, I noticed something on the wall above the booth in there that stopped me in my tracks. It was a plaque dedicated to the original owner of Genghis Cohen, my old pal, Allan Rinde. He was one of the loveliest people in both the restaurant and music businesses, and I still can’t get over the fact that he passed away just about five years ago. I’m still depressed over that loss. But it warmed my heart a bit that night to have the remembrance of him right there in front of my eyes. So I thank the new powers-that-be at Genghis for sharing their love of Allan with the rest of us–old friends and people who weren’t even aware of his presence there alike.