I’ve written about this lovely chamber music concert series at downtown’s Dorothy Chandler Pavilion several times before. (You can read the latest review before this one here: www.itsnotaboutme.tv/news/2012/10/18/music-le-salon-de-musiques-2012-2013-season.) Rarely do I have time for repeat visits to an event, but for Le Salon de Musiques, I make the exception. 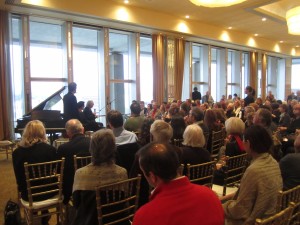 The post-concert conversation. All photos by Karen Salkin.

It’s one of the few events where everyone has a good time. There’s none of the usual grousing that seems inevitable when you get so many people in one place. There may be an occasional intellectual disagreement on a piece of music, but all attendees are upbeat and stimulated. And polite! How often does that happen in this town?! (I think that may be because it’s mainly grown-ups; not exactly a rude, phone-obsessed, text-happy crowd!)

There’s only one concert left this year, on May 19, and then the new season begins again in October. At the penultimate concert last week-end, Le Salon de Musique Artistic Director Francois Chouchan opened the late afternoon program by briefing us on the just-announced line-up for next season. There will be nine concerts, rather than eight; therefore, more opportunities for us Angelenos to be classy. Francois said he chose composers who “touch his heart,” and I’m sure that many of us will share his emotions.

Then we were treated to three pieces performed by only two musicians: Andrew Shulman on cello and Steven Vanhauwaert on piano. I don’t know what about just those two instruments gets to me so much; perhaps it’s because I find something romantic in the pared-down presentation. That’s how I heard the gorgeous music from Schindler’s List live the first time, and I swear, I wrote a whole love movie during that performance! (I never finished it, of course, but let me tell you—it was beginning to be excellent!) 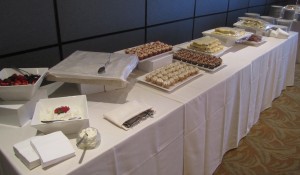 After the concert, a toast with flutes of French champagne, and a post-performance discourse led by handsome musicologist Julius Reder Carlson, the attendees were treated to a lovely afternoon tea. The crowd was so big at this one that they had to set-up the Patina-catered buffet in the adjoining room, which worked out great for everyone. [Note: The organizers of Le Salon know one million times more than I do about chamber music, but I must correct them on a small mistake in the program regarding the title of the post-concert tea fare, which is my area of expertise. They erroneously refer to it as “High Tea,” when in actuality it’s “Afternoon Tea.” The former is more of a supper, with meat pies, sausage rolls, and crusty breads. I’m about to describe the latter to you, which is actually preferable, and is what they served. If I educate even one person on the difference, I’ve done my job.]

How mouth-watering is my dessert plate?!

Even though it’s always a tea service, which we all love, they do change it up a bit every time. This time, there were four varieties of tea sandwiches, mini raisin scones with clotted cream, three kinds of bite-sized cupcakes, and delicious mixed berries with flavored whipped cream. And, of course, tea! Hot or iced. And coffee, too, for the uninitiated. It was all absolutely delicious.

And served by perhaps the best-looking wait staff ever!!! And they were all nice guys, to boot. They made the food taste even better. Even some of the matrons were swooning over them! 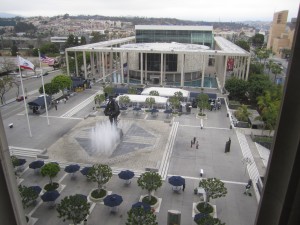 The view out the windows.

Lastly, I have one seat choice suggestion that I thought of during the music: If you’re like me and get antsy using just your ears with your eyes open, take a seat where you can look at the stunning view outside the Dorothy Chandler Pavilion’s floor-to-ceiling windows on the fifth floor. The movement of even the few people out on the Plaza, and the cars, as well, is a combo of Rear Window and ballet. Wait a second–remind me to speak to Matthew Bourne about creating Rear Window, The Ballet. Or Stephen Sondheim about doing Rear Window, The Musical. (I told you I do some of my most creative thinking during cello and piano recitals!)

So, if you want to have a similar experience to mine, on any or all levels, make sure you don’t miss the next concert in this series. Otherwise, I hope to see you there on October 6 when a string quartet kicks-off the new season. (And, if you’re a student, they have special affordable prices for you, so I suggest you take advantage of that!)

The next concert is one May 19, 2013. For tickets and more info on the concert series, go to www.lesalondemusiques.com