Trending
You are at:Home»MOVIE REVIEWS»MOVIES: THE LION KING AT THE EL CAPITAN
By Karen Salkin on July 31, 2019 · MOVIE REVIEWS

THE LION KING AT THE EL CAPITAN

I usually celebrate my anniversary with LA in this e-zine, and also by doing my yearly ritual of re-tracing my journey down the coast, through Malibu and over to Westwood Village, where I landed when I was just a teen-ager from Brooklyn. But this year I did it in a different, but equally special way—with a trip to the El Capitan Theatre in Hollywood to see the new film, The Lion King.

As I always say, the El Capitan is the only place to see Disney films like this one. Besides that they have the best screen and sound system, (not to mention the all-important delicious popcorn,) they always have something special to add to the proceedings, both before and after the showing. 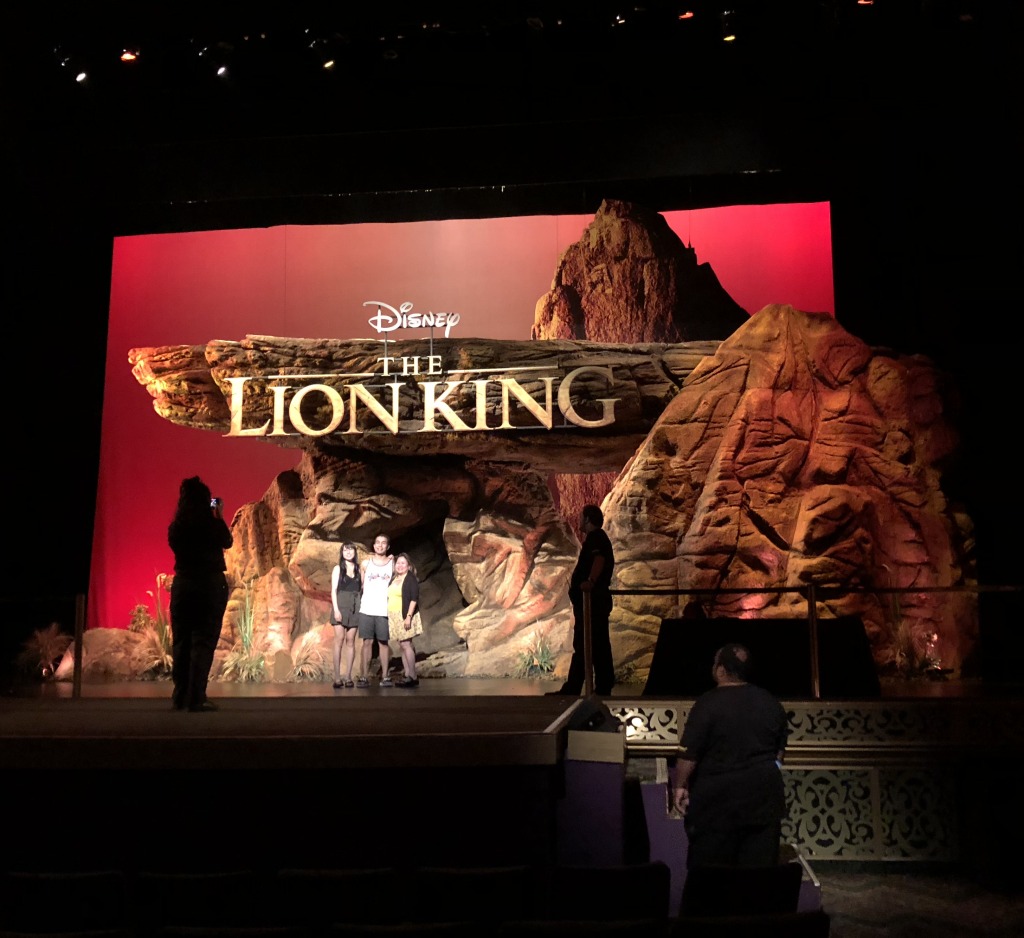 The Pride Rock photo op on the El Capitan stage, with one staff member taking the pix, one helping direct the guests, and one helping them down the stairs. Photo by Karen Salkin, as is the one at the top of this page.

I really recommend that you get there early this time, so that you can take advantage of one perk that happens only before the movie. Everyone can go up on the stage to take a picture right in front of the impressive Pride Rock display. And no worries about who in the group will have to take the snapshot—the theatre always has an amiable staff member right there to do it for you! (And several others to direct you and assist you on and off the stage. They’re a big help!)

And then both before and after the screening, there’s another photo op right in the lobby. That’s where you’ll find the mural featuring young Simba and his dad! (Wouldn’t that make a great Father’s Day card for next year?) 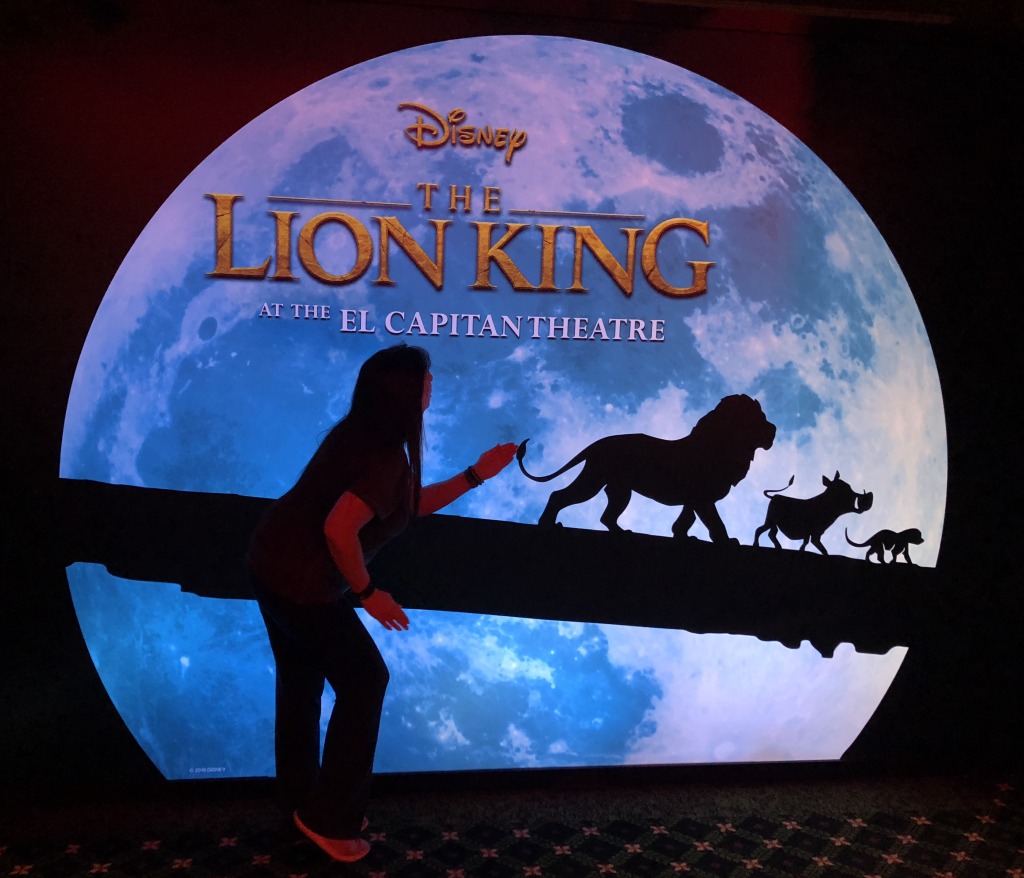 Karen Salkin, joining the film’s stars on their journey. Photo by Mr. X.

And don’t forget to visit the lower lobby for yet one more photo op. This one is my favorite—it’s the striking image of the animals walking in a row along the plains. (Or whatever that stretch of land is—I’m not an expert in lion habitats.) And I so appreciate that they have a table right beside that display, on which to leave your belongings so that they won’t get in the way of your pic. This was the second time in a row that I left my glasses on it—if the table had not been there, I would have left my specs on the floor, and they probably would have already been stepped on!

And then make sure to be in your seats before the previews begin because even the raising of the curtain at the El Capitan is spectacular. Mr. X says that it’s “a show in itself!” 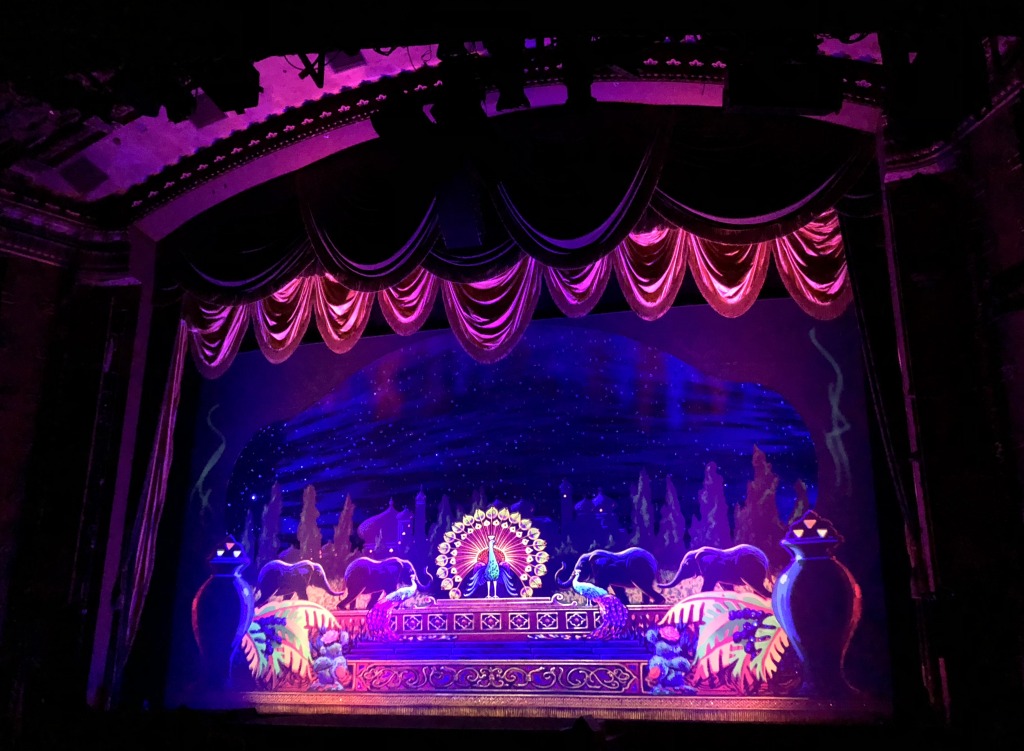 On the day that was saw The Lion King, I was reminded why it’s fun to see movies like this with kids in the audience, which they usually are at the El Capitan. In the film, when the bird played by John Oliver told the two young lions that they would get married when they grow up, a kid in the audience loudly said, “Ewww.” I loved that.

I’m going to publish my review of the entire film at a later date; I just wanted to apprise you of all the El Capitan specialness as soon as possible.

But I will share a few of my quick thoughts about it right now. Most importantly, I’m partial to actual cartoons, but this animation is stunning! (And it’s made moreso by the El Cap’s technology.) You have to see it to believe it–it’s jaw-dropping. 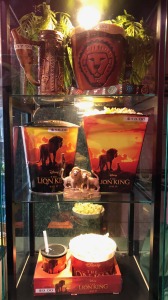 Some of the fun concessions choices at the El Capitan. Photo by Karen Salkin.

Also, I’m really curious as to what vegans think of The Lion King, with animals eating other animals. Maybe vegans will want to move to the jungle and make its denizens eat a plant-based diet, too! (But those hypocrites will still keep our carnivore names, like “chicken,” “sausage,” and “turkey!” Don’t even get me started.)

For some reason, I thought this film is in 3D, but I’m so glad it’s not because I think I’d be too scared to watch wild animals running towards me so realistically!  (I found-out later that it is shown like that elsewhere, but I thank the El Capitan for not subjecting us to that! Forget the lions–I would have fainted if I saw those hyenas in 3D!)

And lastly, this thought occurred to me while I was sitting there: The El Capitan brings us all the movies I want to see. So, if I were a kid, I’d think that there’s only one theatre in the whole world, because I would never go anywhere else!

The Lion King at the El Capitan running through September 4, 2019
www.elcapitantheatre.com