Trending
You are at:Home»MOVIE REVIEWS»MOVIES: ONWARD AT THE EL CAPITAN
By Karen Salkin on March 9, 2020 · MOVIE REVIEWS

ONWARD AT THE EL CAPITAN

There are a lot of Disney works I would otherwise not rush out to see were they not playing at the El Capitan. That theatre makes the entire movie-going experience so special.

And each film shown there has different surprises for us. The fun for this run of the new Pixar animated offering, Onward, begins in the lobby, with photo ops at not one but two Mural Walls. (And I was happy to discover not only a hand sanitizer dispenser out there, but also wipes. The El Capitan is definitely taking all these new health precautions very seriously, which I totally appreciate.) 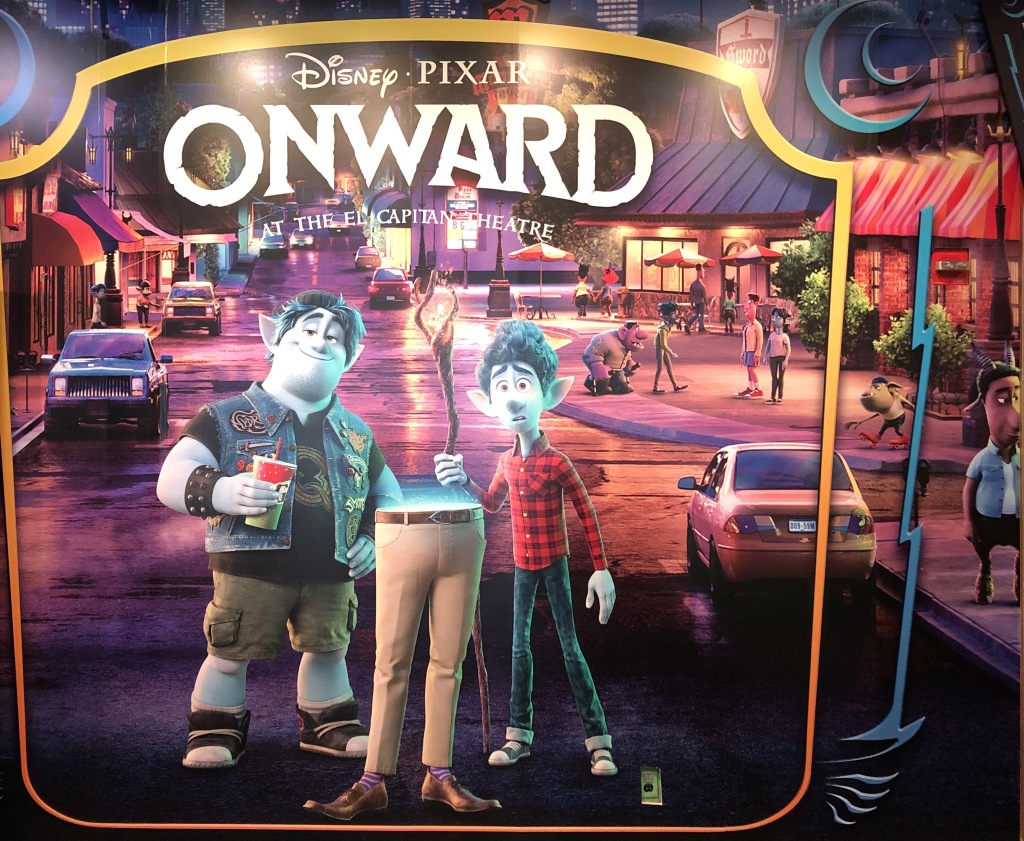 One of the murals in the lobby. Photo by Karen Salkin.

I suggest that as soon as you take your pix, (and get your delicious popcorn, of course!,) go right to your seats because there are oodles of pre-show activities for Onward! Besides some adorbs images up there in the sky boxes, first up is listening to the fabulous famous live Disney tunes provided by the El Capitan’s organist extraordinaire, Rob Richards. He always sets just the right tone for the fun that’s to come. 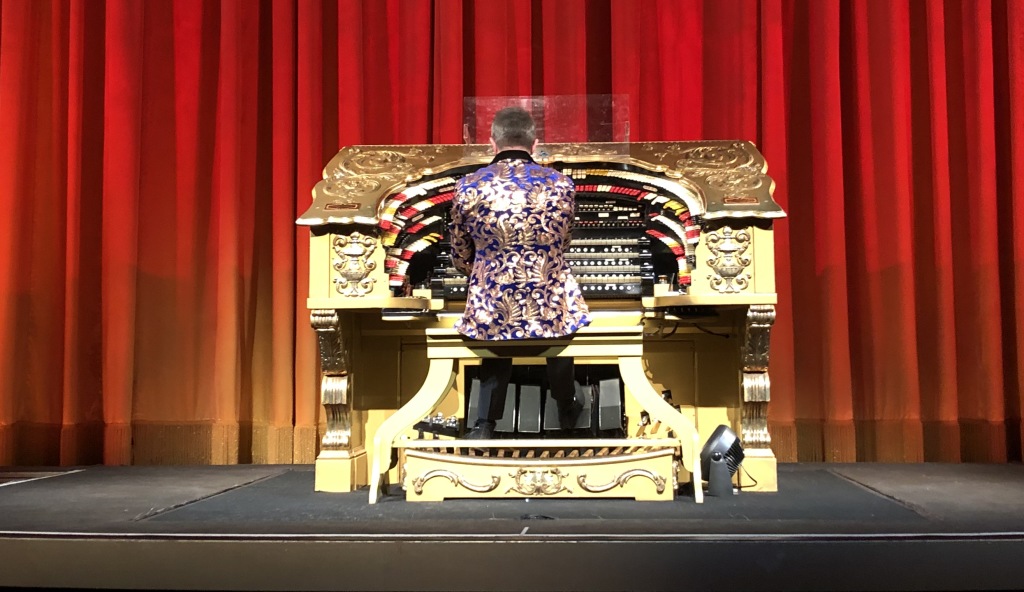 Then the theatre manager does a free raffle of Onward-related items, which, trust me, I wish I had won at the showing I attended! Each film-appropriate gift, (like a backpack, “happy” socks, and a notebook and pen,) looked so entertaining.

But the part of the pre-show that brought the biggest smile to my face was the stars of Onward, brothers Ian and Barley Lightfoot, performing “live” on the El Capitan stage. When they’re done on the stage, they walk down the aisles, greeting some of the patrons along the way! It’s so charming. 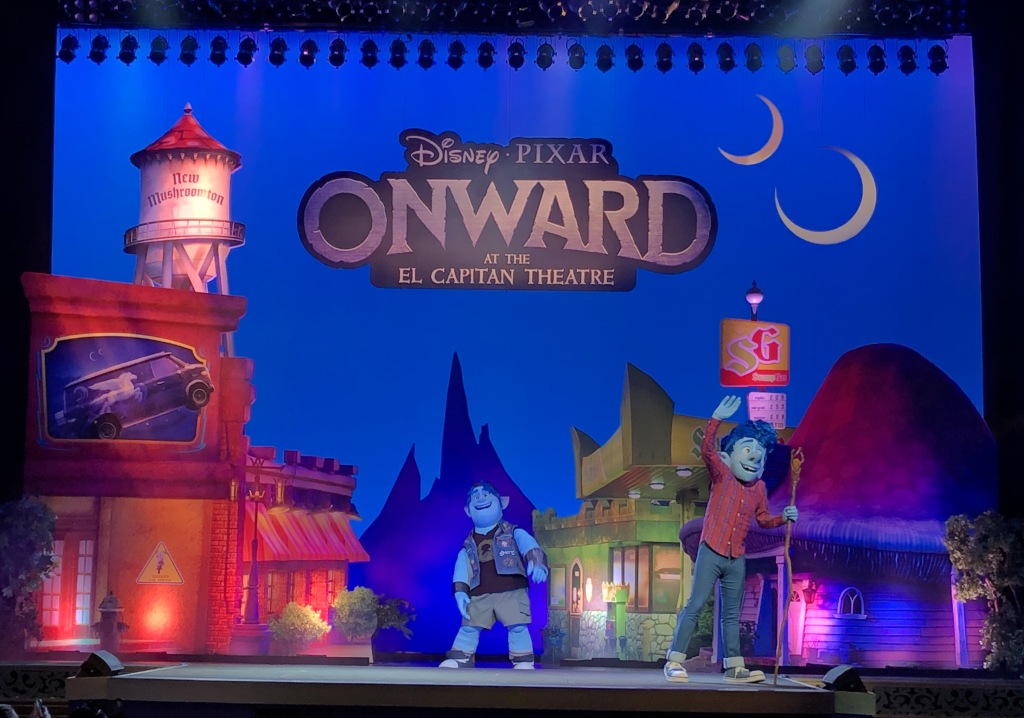 And somewhere among all that fabulousness is the bonus of a (mercifully) short Simpsons cartoon. (If, like me, you are not a fan, just use that time to go the restroom, so that you don’t miss even one minute of the rest of it. Even the curtain raising is a spectacle to behold!)

But wait—there’s one extra surprise this time…outside the theatre! Parked right in front of the El Capitan on Hollywood Boulevard is a full-size (and I suspect operational) replica of Guinevere, the Lightfoot brothers’ van! Theatre patrons are encouraged to take photos with it, on both the way in and out. I actually had no idea what Onward was about before I saw it, (as I said earlier—I see all these Disney films just because I love going to the El Capitan,) so it didn’t mean anything to me on the way in. But as we exited, I was very interested to take a gander at the vehicle so up-close and personal. 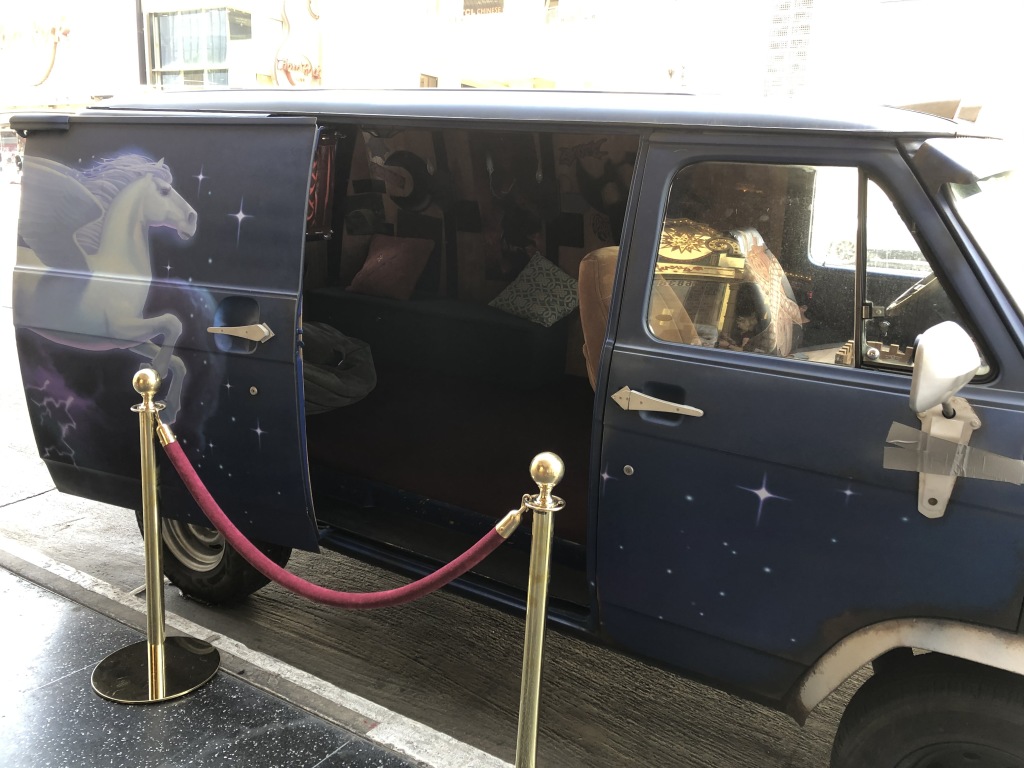 Guinevere, in front of the El Capitan. Photo by Karen Salkin.

But before you leave the theatre, make sure to pick-up the complimentary mini-poster and stickers set that are on the exit tables. (I don’t know for sure that they do this at every showing, but my friend and I were there on just a regular afternoon, as opposed to opening night, so I’m assuming that they give them out all the time for this movie. If not, now you know to see the films at El Capitan at the beginning of their runs, just in case of some special perk.) 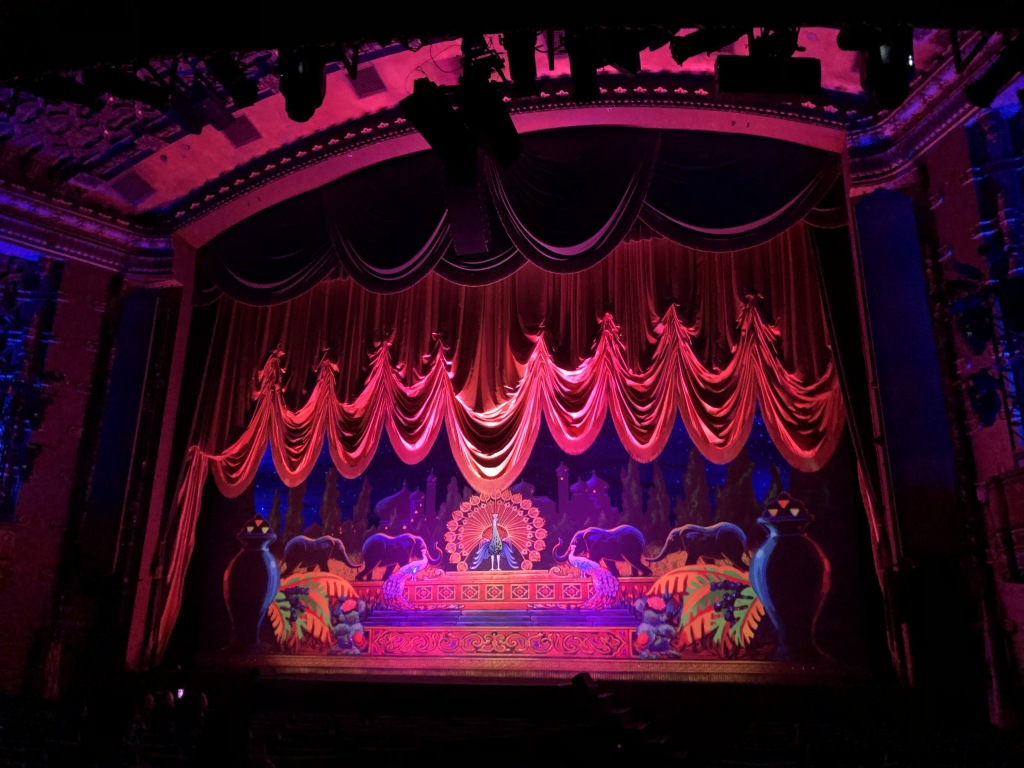 The spectacular curtain-raising at the El Capitan. Photo by Karen Salkin.

Speaking of the movie itself, I did enjoy Onward. No voices were familiar to me, (going in, I had not one clue as to who any of the actors were, and I didn’t even recognize Julia Louis-Dreyfus’ voice,) which made it so much better—I didn’t picture the characters as being anyone other than who they were drawn to be!

Some of it does get a bit repetitive, but there are not only several chuckles along the way, but I got a tad choked-up by the end, which provides a valuable lesson, for everybody, about just what certain people should mean to you.

I have one note of caution to parents of young children, though: Please, please, please make it clear to your kids not to try things from the movie at home, like walking over something dangerous with an “invisible” bridge!  My grown-up male friend said that to me the second it occurred on-screen, just as I was thinking it, too.

Other than that, I expect that all ages will enjoy Onward. But only at the El Capitan, of course!

Onward at the El Capitan running through March 22, 2020
www.elcapitantheatre.com