Trending
You are at:Home»MOVIE REVIEWS»MOVIES: I AM LOVE
By Karen Salkin on June 18, 2010 · MOVIE REVIEWS

Tilda Swinton’s new film, I Am Love, comes out today, and although she spoke at the industry screening I attended, I still have tons of questions. I wasn’t even going to review it for you, because I just didn’t care about it one way or the other, but I figured you might like to know more than I did going in. 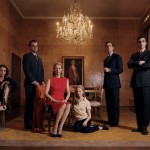 It’s one of those slow, semi-artsy films, and get this, which I wish I had known–it’s in Italian with subtitles. That never really bothers me, except that you have to plan just whom to sit behind more carefully. You don’t want every other word to be blocked! It’d be like trying to listen it to it in English, but…on AT&T!

Okay, so I believe that descriptions of it say something about an affair. But that took a long time to get to, and I swear, there was absolutely no impetus for it to happen. There was no big build-up or apparent reason that these two people would like each other that way. Okay, he was a chef and she loved his food, but they had barely ever even seen each other, had spoken just a word or two, and he wasn’t even good-looking!

I never saw any chemistry between them–only chemistry between the woman and the food. If that’s all it takes to sleep with this character, there would be a lot of Italian chefs notched on her belt!!! [Warning: I’m pretty sure we saw some actual crotch hair on her while he was the one chowing-down, if you get my drift, and I definitely saw a wisp or two on her nipples.]

The whole premise didn’t work for me. She seemed like such a family woman, and one who wasn’t even ignored by her husband, having a bad life, being lonely, etc. She had family around her at all times, and was portrayed as even being content to sit in a room and sew while her children were having extravagant parties at her villa. We should all be this at peace. 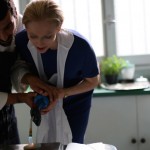 And the character would have been more careful about the fledgling affair. Right from the beginning, she was shown to be a meticulous planner, with the opening scene being about her making the seating chart for just a basic family dinner! How would someone like that be careless in keeping her affair a secret???

For example, in what appeared to be their second time together, (though time was portrayed terribly in this film,) she let the guy chop her hair off! How is that sexy??? And did she not think her family would notice her odd haircut? Especially since she’s such a fashionable woman. If I came home with that haircut, (as actually happened once, by accident–don‘t ask!), and wasn’t hysterical crying, Mr. X would know something was up, even though he would have to guess at a lesbian affair because, let’s face it, that is just not a straight chick ’do!

In case I haven’t already spoiled enough with that sex description back there, this a spoiler for the end, so skip to the next paragraph, if you haven’t yet seen it, which of course you haven’t because it just comes out today!!!  (But please remember to check back after, to see if you agree with my assessment of the situation.) Ready?: After such a terrible tragedy as what happens near the end, I feel that this character would have immediately ended the affair, and concentrated on helping what was left of her family, and definitely not have accelerated it! That just did not ring true in the scheme of real life. And Tilda said that she and the director had written this film over eleven years! I guess they should have made it twelve.

Tilda’s explanations in her post-screening discourse just didn’t cut it for me. I should have been the one to grill her, but then we would all still be there! I decided to just accept it as someone’s work and move on. At least it was lovely to listen to an actress who was actually intelligent and non-phony; so many of the actors who speak at these presentations are somewhat affected and full-of-themselves.

My advice for those of you who still want to see I Am Love: drink plenty of coffee before you go. Or just use the opportunity for some summer snooze time.