This was one of the most fun movie premieres in years!  The whole thing was so well done and a great time was had by all.  It was highlighted by generous parties, both before and after. 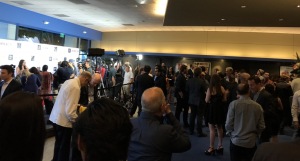 And the attendees were an attractive, very well-attired crowd, which, despite this being “Hollywood,” I rarely see anymore.  Just about everyone dressed-up for the occasion; I saw only three pairs of jeans among the hundred or so guests!  And they were all very willing to mingle.  My friend Diane commented that the entire event was very comfortable.

I’ll tell you about Warning Shot itself in a minute, but you know that my linear mind has to go in order.

David Spade in the foreground, with Patrick Duffy and Linda Gray behind him. Photo by RozWolfPR.

It was at the Writer’s Guild theatre, which is just the right venue for motion picture happenings such as this one.  The evening began with a VIP reception in the spacious lobby, during which the stars of the film made their much-photographed entrances.  I spied the star of the film, David Spade, along with a very interesting duo—Dallas’ Patrick Duffy, (who was almost unrecognizable with a very long gray ponytail!,) accompanied by his co-star from that classic TV series, Linda Gray. I’ve never seen that show, but it was still nice to see two televisions icons out and about together.

As soon as we walked further in, the very first thing we noticed was a table of chilled bottled waters, and right past it was one with bags of popcorn, in a variety of mystery flavors.  What a lovely way to get things started!  For me, popcorn is de rigueur for a movie showing, but this was so much classier than having to deal with a concessions stand. And no one had to choose between healthful water and terrible-for-you soda!!! 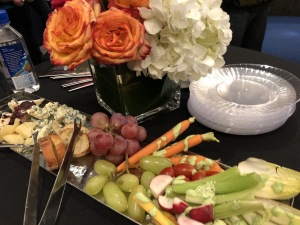 The handsome tray on every table. Photo by Karen Salkin.

The pre-show cocktail fete was already in full swing when my guest and I arrived. It featured elegant passed appetizers, which were perfect for the occasion. And on each high-top table was a cheese and fruit platter.  Fabulous! All the servers were lovely, which always makes things that much more pleasant.

It seemed like no one wanted to sit down and get the film started, but when we all finally took our seats, we were a very enthusiastic and appreciative audience.

Warning Shot, which is about a woman and her daughter being held hostage in their new home, is not really my cup of tea because of that subject matter, but hey—it features James Earl Jones and Bruce Dern! How many modern films can boast those two?!

The ready-made bags of popcorn. Photo by Karen Salkin.

I guess what marks it the most, though, is that this is David Spade’s first non-comedy movie, even though he can’t help but have a funny delivery, which definitely helps. There are several other good performances, especially Dwight Henry as the nice hostage-taker, Guillermo Diaz as the crazy one, and Tammy Blanchard as the mother. (I hadn’t seen Tammy since she played young Judy Garland in a TV mini-series back in the day, and she grew-up to look even more like that legend! So interesting.) 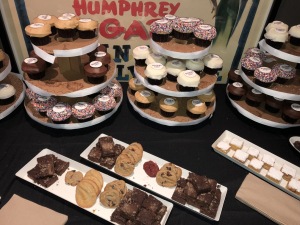 The dessert table. (For once, I was the last person to get over there!) Photo by Karen Salkin.

When it was over, we all re-convened in the lobby to discuss and laud the film. And eat some more, of course! This time, there were much more hearty passed tasty tidbits than before, including the most delicious black bean and honey empanadas. It was good (and smart!,) of the caterers to include so many vegetarian offerings, both before and after the screening. And the sweet treats were just what the doctor ordered to finish out a successful soiree.

And, once again, it seemed that no one wanted to leave! Isn’t that the way that all Hollywood events should be?