Trending
You are at:Home»EVENTS»MOVIE/EVENT: THE MAX FACTOR
By Karen Salkin on August 14, 2019 · EVENTS, MOVIE REVIEWS

I was happy to be included among the invitation-only guests who were lucky enough to get a sneak peek at the new documentary, The Max Factor, this past week-end. What a lovely, classy, intimate event it was!

As a girl who is totally make-up-obsessed, and has more cosmetics than Sephora, (no lie, I’m afraid,) I’ve always loved going to the Max Factor Museum in Hollywood. As a matter of fact, when I hosted my own limited series on the Travel Channel back in the day, and the producers gave me my choice of showing any venues in Los Angeles, I chose this place for my very first segment! 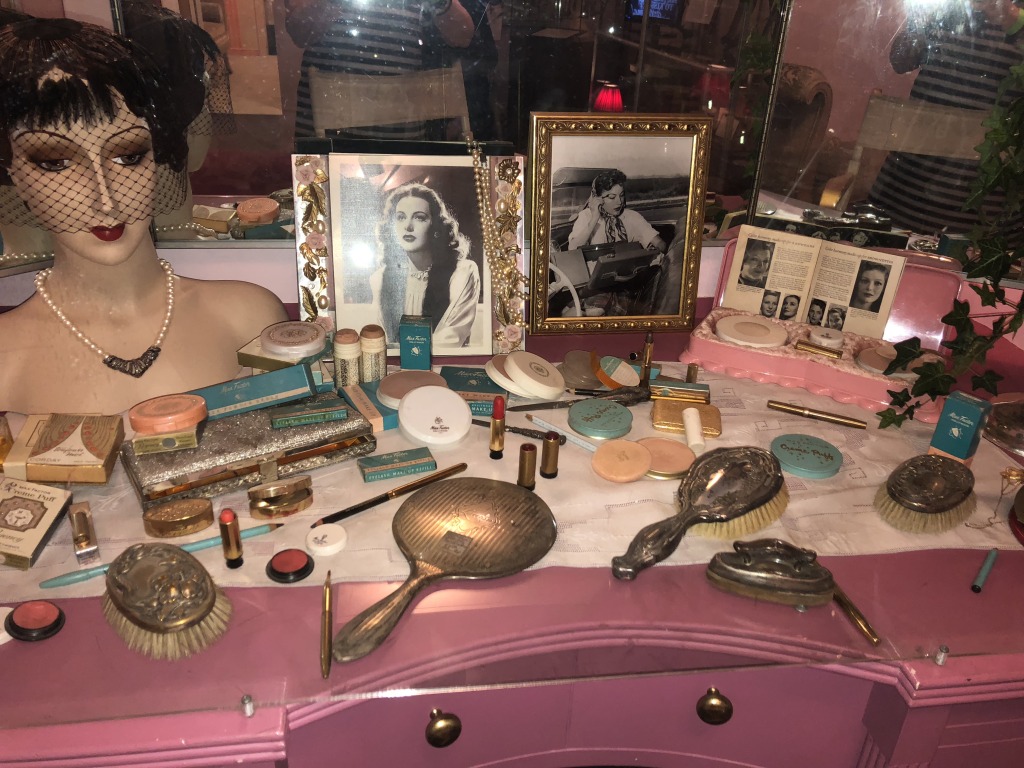 One of the Max Factor displays in the museum. How mouth-watering!!! Photo by Karen Salkin, as is the one of the audience at the top of this page.

And then somewhere along the line, even though the name of the building has remained the same, the interior changed its moniker to The Hollywood Museum. And now it features all kinds of fabulous show business exhibits year-round. But, thank goodness, they’ve retained all the stunning Max Factor hair-color-appropriate make-up rooms and displays on the first floor.

I’ve attended many opening night fetes here, for various television and movie showcases, but this event was their best one ever. Making it entertaining from the get-go is the clever title of the documentary, The Max Factor. (And it was produced by people for whom English is not their first language! Very impressive.) 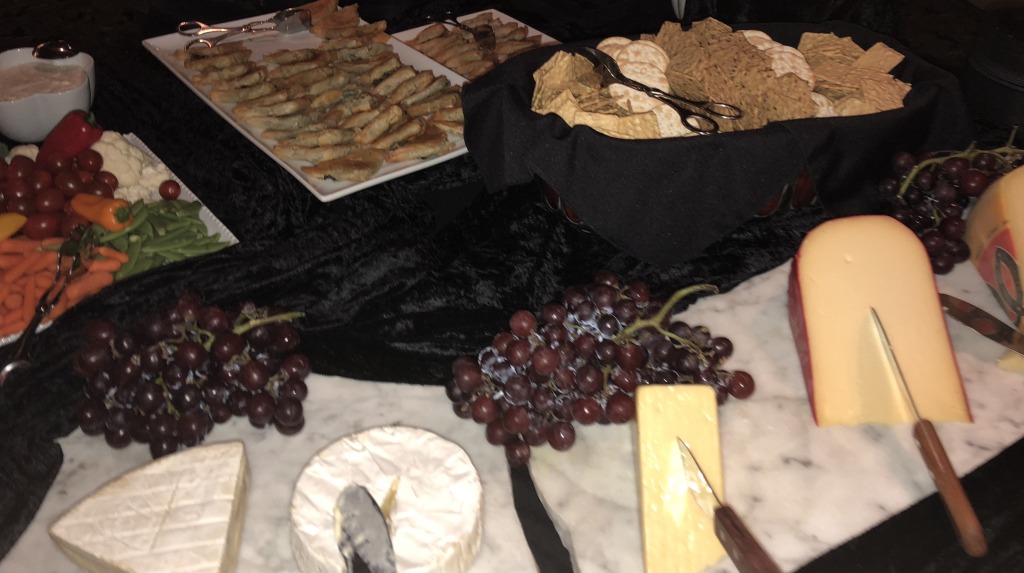 Part of one of the food stations. Photo by Karen Salkin.

Even more clever was the way the entire afternoon was structured. Usually at screenings, we see the film first, in often uncomfortable surroundings, and then are perhaps treated to a reception after, when we’re all exhausted. But the Max Factor event planners organized the proceedings so much better than that!

The reception was up first, right as we entered the fourth floor party area of the edifice. There was an open bar, and three food stations: one featuring hot snacks, another with cold ones, and a dessert table. Who would need more sustenance than that? The servers were all lovely and pleasant, and adorable Mateo even told me to remember napkins! My mother would have loved that guy!!!

And the seating arrangements were just perfect. There were screens set-up in six different areas of the same floor plan, and you could choose to sit in any one of them. My friend and I chose a couch, which was the coziest choice, and that area even included a coffee table, the better on which to enjoy our snacks. 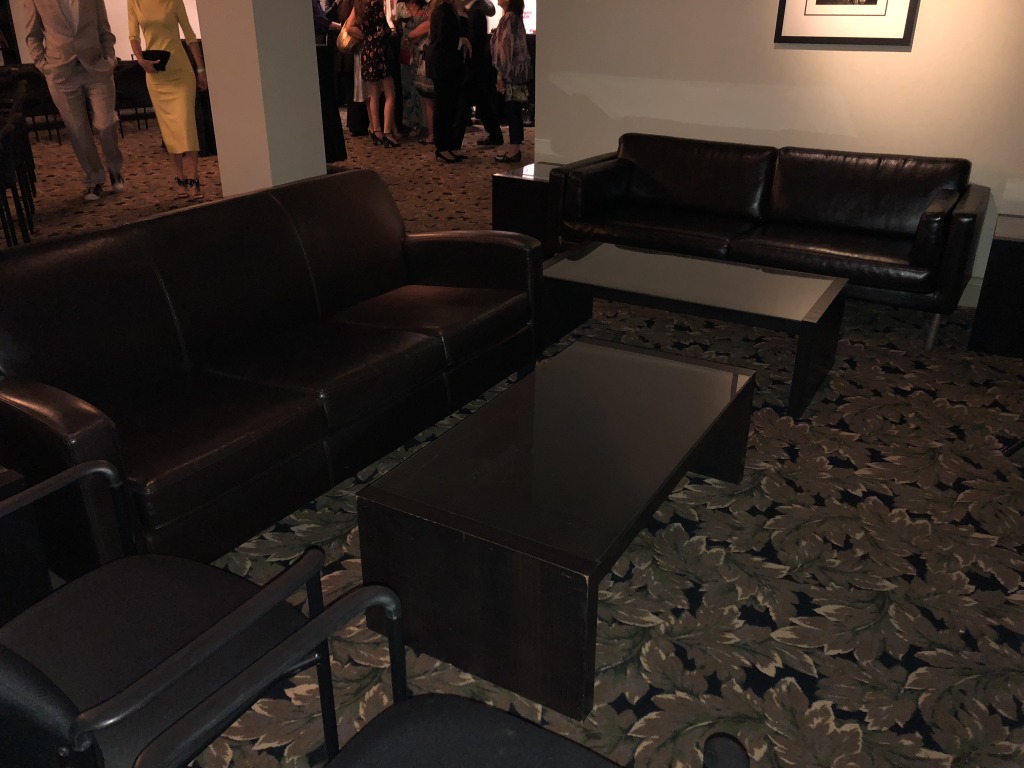 One of the comfy seating areas in which to watch the film. Notice the well-dressed guests in the background! Photo by Karen Salkin.

And that all led to upbeat mingling before we even saw the film. Doing that beforehand meant that we were not distracted while watching the movie, trying to remember to say hi to someone afterwards. Brilliant move by the organizers! And I was thrilled to see that the majority of guests knew enough to dress nicely for this chic event! I’m sure that Max himself would have been proud.

Then came the pièce de résistance of the afternoon—the screening of The Max Factor, which, of course, is about legendary cosmetologist, beautician, inventor, and entrepreneur, Max Factor. (Duh.) Since, as I said, I had already done a piece on him years ago, and I’ve been to this location many a time since, I was already familiar with most of his life and work. But my guest, who’s in the beauty biz himself, was just enthralled by it all, which I’m sure the entire assemblage was, as well.

Actually, everyone who sees this easy-to-watch documentary should enjoy it–in the biz or not, cosmetics aficionado or not, entrepreneur or not. Max Factor’s life journey is a fascinating tale. You’ll have to see it for yourselves, but I will give you a bit of insight. 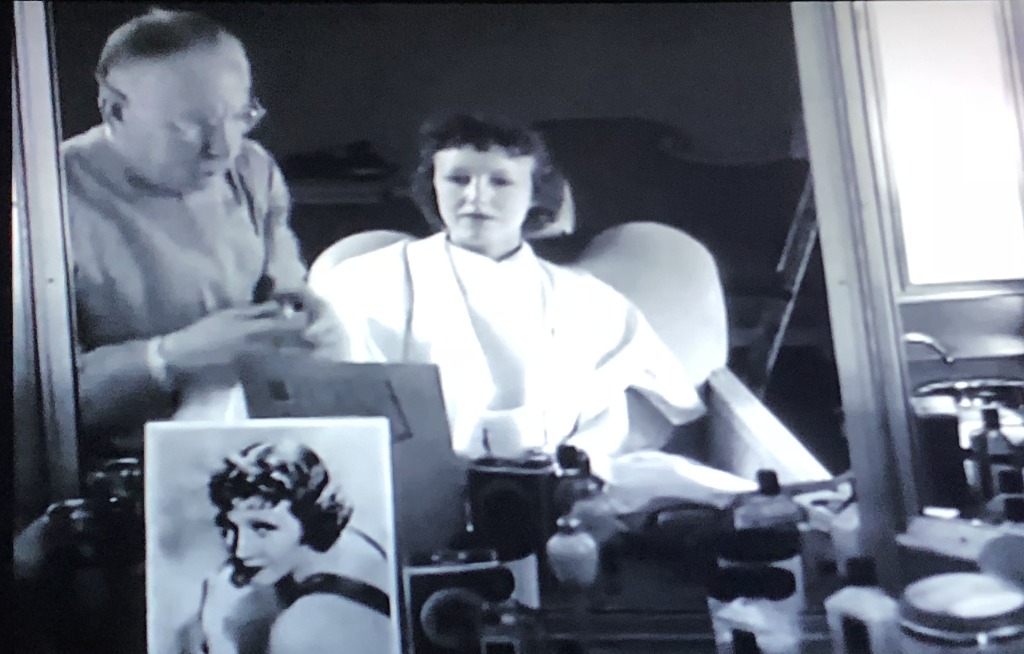 A still from The Max Factor. Photo by Karen Salkin.

The Max Factor covers Max’s entire history, from his struggles as a Jewish man in very early twentieth-century Poland, to his fleeing to America, (by way of Russia, with an assist from his make-up skills, of course,) to arriving in Hollywood, to revolutionizing the beauty industry, for show business and beyond.

Since this is a documentary, there’s a lot of incredible archival footage, combined with a few people explaining his story. Most famous of those is the always-stunning Jaclyn Smith. The funny thing is, she could have used Max himself to do her face for this shoot because her make-up did not look good at all—the audience is never supposed to notice it on-screen, and I couldn’t get past it to her beautiful visage. I see Jaclyn around town all the time, and she looks a zillion times better (and smoother) in person. (But maybe the producers did that on purpose, to show us that no one can fill the late master’s shoes!)

The screening was followed by a Q-and-A, and then any guest who was interested, (and had the time,) was treated to a curated tour of the first floor. I took my friend on his own private tour, so that we could take our time. (And mingle with the regular museum patrons, which was tons of fun for us. Two little boys even made us explore the “scary” room with them!)

I never tire of looking at original, classic, old school make-up! I began my lifelong beauty quest with brands like Cover Girl and Max Factor and Yardley when I was but a young teen-ager, and I thought they made me the most glamorous girl in the world! (Still do, actually.) And I still own some of my own original Max Factor items!!! (No worries—I know not to use old products. But I do love looking at all of it, especially remnants from my teen-age days!) 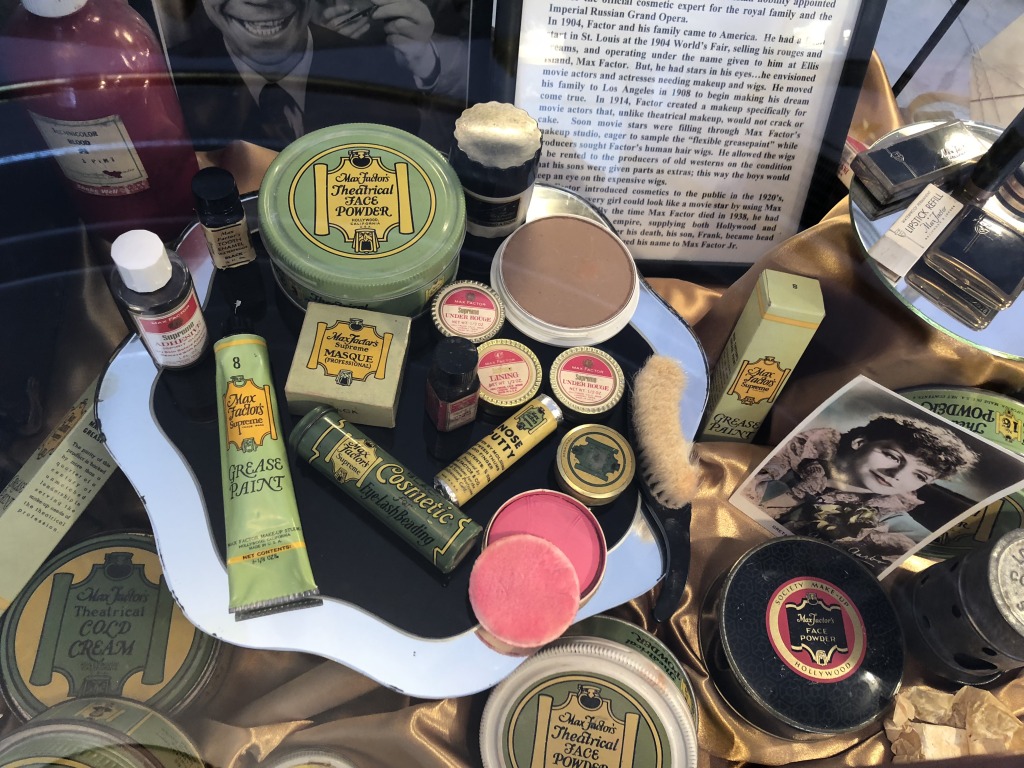 More of the museum display. Photo by Karen Salkin.

All in all, this was a fabulous afternoon in the big city! For those of you whose appetites are now whetted to see The Max Factor, you’ll have to wait a bit until it comes to either your big or small screens sometime in what we all hope will be the near future. Until then, though, you can always stop by the museum, and see the original gorgeousness of which I speak in all its up-close glory!