Okay, after a very long screening season, I finally got to vote for the SAG Awards today, in advance of the show this coming Sunday.  Most of the decisions were clear-cut for me, such as Gary Oldman for Best Actor.  (In case you can’t keep these many awards shows straight, the SAGs go to actors only; they’re not for any of the other usual categories, such as Best Director and Best Picture, nor any of the technical ones, such as for costumes and sets.)

So, ahead of that awards telecast, here are the rest of my mini movie reviews.  (You can read my first several here: itsnotaboutme.tv/news/movie-reviews-mini-movie-reviews-for-2018.) [Note: I never care about the television categories for these awards, since I’ve never seen most of these highfalutin shows. I just concentrate on the movie awards.] 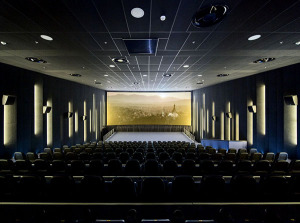 Now that I’ve seen all the nominated performances, (outside of that of Steve Carrell—obviously his studio for The Battle of the Sexes even felt that this film did not deserve anything because they did absolutely no promoting of the picture whatsoever!,) I know exactly for whom to vote. Unlike the body of my fellow SAG members, who feel they’re supposed to be mysterious about their votes, in case they run into a star and want to say that they voted for him or her, I don’t mind sharing mine with the world. Those answers will be at the bottom of this column.

Phantom Thread—Boy, what false advertising this campaign is!  The one and only reason to see this film is that it’s Daniel Day-Lewis’ last movie, (if what he claims does turn-out to be true.)  But the ads, which say something to the effect of “nothing is what it seems,” are just nutty.  Except that that line might be spot-on because the shots they use in the promos have nothing to do with the action of the go-nowhere story!!!

The Disaster Artist—This was my co-favorite film of the season, along with The Big Sick.  It’s such a shame that James Franco just got hit with all those sexual harassment allegations because I hope that doesn’t stop any of you from seeing this laugh-filled true-life tale. It’s the only film this season that I opted to see again!

Lady Bird—This one is pretty good, but it’s another one of those films this year with no ending, which I hate. Everyone’s good in it, especially the darling star Saoirse Ronan. (I have a lovely story about her in a moment.) But I just do not get the fuss about Timothee Chalamet, either in this film nor his starring role in Call Me By Your Name. He’s good enough, but really nothing special, as young actors go. Other film critics make it seem like he’s the second coming of Leonardo DiCaprio, and that is just so far from reality. (Just watch a young Leo in What’s Eating Gilbert Grape, and you’ll see what I mean.) Okay, now here’s my little story about Saoirse. When she was leaving the screening that I had just seen her speak after, I was parked next to her car in the back. The other stars of the movie all came out and got into their cars to leave, but Saoirse strode right past my car (and hers,) over to the waiting fans who were desperate for autographs and selfies. And you could tell she didn’t do it for anyone to think she’s nice; she just is nice. I have never seen that in all my years of going to that particular screening room, and the guard in the parking lot told me this was only the second time he had ever seen it in all his years of running the theater!

The Florida Project—I wish I had known the ending in advance, so I could have just enjoyed the journey.  It’s pretty much a painful story, because you know there can never be a happy ending for people like these, so just enjoy the performances, mainly by the children, especially the star little girl, Brooklynn Prince.  They’re enjoyable as is, but when you think about someone so young coming-up with this performance, it’s just mind-blowing.  Bria Vinaite, who plays her mother, was not an actress before this, so she’s pretty miraculous, as well.  The only head-scratcher is how Willem Dafoe has been nominated, and winning, so many awards!  He’s good, but only as good as anyone in his position should be to merit the job.  I kept waiting for him to have some scene that would warrant all this attention, but it never came.  I think his acclaim is due to the fact that the Supporting Actor category is very weak this year.

Three Billboards Outside Ebbing, Missouri–As much of a downer as this film is, (as is just about everything ever written by Martin McDonagh,) the acting is so wonderful that I think everyone should see this film, which, of course, is another one without an ending.

Roman J. Israel, Esq.–I really do think that this is the best work that Denzel Washington has ever done. But the film is just as depressing at the end as it is in the beginning and the middle. It’s very sad all the way through, but Denzel sure is great in it! And Colin Farrell has turned into a handsome man right before my eyes! 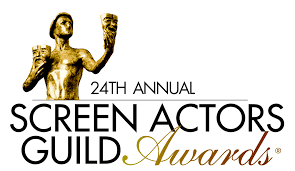 Here are my votes, along with my predictions:

Male Actor in a Leading Role: Gary Oldman for Darkest Hour. And I’m pretty sure that he’ll win. If he doesn’t, my fellow SAG members are idiots!!! Although, because of his extreme popularity in the industry, James Franco would have given him a run for his money before the recent sexual harassment allegations against him. (And it’s a travesty that Timothee Chalamet was even nominated for Call Me by Your Name with the rest of this powerful male field.)

Female Actor in a Leading Role: [Note: This verbiage is so pretentious!!! We’re “actresses,” not “female actors!” Gag me with a spoon!] These are all worthy nominees, so this was the hardest category to judge. But I had to go with Sally Hawkins for The Shape of Water, because her role and performance were so different and special. But I have a sneaking suspicion that Frances McDormand will win for Three Billboards Outside Ebbing, Missouri, because she’s American and more popular among her peers, for some odd reason.

Male Actor in a Supporting Role: Sam Rockwell for Three Billboards Outside Ebbing, Missouri. For perhaps the first time ever, this is the weakest category. But Sam deserves the win for his portrayal of the bad guy as a complete human being, although I have a feeling the victor will be Richard Jenkins for The Shape of Water. He’s a journeyman actor, (as opposed to being a star,) as are most of the Screen Actors Guild members, so they’ll love to vote for “one of their own,” especially since he’s up there in age. And they’ll want Water to win something because most people feel that it’s a beautiful film. I like Willem Dafoe, in general, but I was left scratching my head about all his awards and nominations for The Florida Project. His acting job in it is adequate, but the furthest from special of all of the nominees in every category!

Female Actor in a Supporting Role: Hong Chau for Downsizing. I know she doesn’t have a chance, though. The award will absolutely go to Allison Janney for I, Tonya. She seems to be beloved in the industry, and this is a fabulous, hilariously funny role. And I feel like voters will also think they’re slapping actual Tonya Harding in the face (which everyone still seems anxious to do, after all these decades,) because she detests her crazy real-life mother.

Cast in a Motion Picture: This is really the big one, even though, because it’s not for an individual accolade, it never feels like it. This was my absolute hardest decision because they all have something to recommend them. But really acting-wise, (which this is for, as opposed to all the other awards shows’ “Best Picture” awards,) you cannot beat the cast of Three Billboards Outside Ebbing, Missouri. All the other nominees are excellent, as well, but since we have to vote for just one, that’s the cast who gets my vote. I have a feeling that either Get Out or Lady Bird will win; the first because there’s a real lack of color in these nominees, (as opposed to last year, where it seemed, embarrassedly, like people were winning just because they’re black,) and the latter because this film is so popular. And directed by an actress!

So, there you have it!

Now here’s what will be happening with my usual live-tweeting this Sunday for the SAG Awards. As you all probably know by now, I usually live-tweet during the entire live show, beginning with the afternoon arrivals. @MajorCelebrity. But, this Sunday is also the all-important football play-offs, where the teams will be narrowed down to the two that will be going to the Superbowl! And Mr. X and I also have planned to go to a belated birthday brunch for me that morning. So I have no idea how I will fit it all in! As of now, I’ll just tweet during the second showing of the SAGs that night, which means I won’t be live. I’m so sorry about that to those of you who look forward to my doing it, but what’s a sports-loving birthday girl to do?! But never fear—my entire review of all the festivities that night will appear here on Tuesday, so you can learn about it all then. But, please also check out my twitter (@MajorCelebrity) on Sunday, just in case. No promises, though.

And may the best (meaning the ones I voted for) actors win!