Trending
You are at:Home»Uncategorized»MOVIE REVIEWS: OSCAR NOMINATIONS 2011
By Karen Salkin on January 26, 2011 · Uncategorized

Well, the Oscar nominations for 2011 came out yesterday, and they were a little different from the SAG and Golden Globe nods. I’ve seen just about all the films by now, minus three that have nominated actors, but I’ll finish them this week. I actually have to be done by tomorrow night–we actors have to finish our ballots by Friday at noon, and I just don’t think it’s fair to vote without having seen all the nominated performances, no matter how painful they may be. (“Painful” meaning either “sad material” or just “hard to watch” because they’re not good. The former reason is why I’m saving 127 Hours till the end.)

I’ll give you my winner predictions and wish list closer to the show itself, but for now, here are my quick takes on the three most recent films I’ve seen. 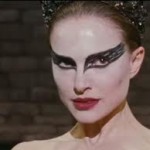 What the frig was that??? I saw it one and half times, (the “half” by accident) and I had no idea what was going on. I do now, actually, because I researched it, but we shouldn’t need Google to be able to understand a ballet movie. Maybe for Inception, but not ballet.

Okay, let’s forget the stupid story for a few minutes, and I’ll get to the way-too-hyped performances, too, but the basic cinematography is a travesty!!! The friend I saw it in a theatre with wanted to leave because the nearly Blair Witch Project camera technique was making her physically dizzy and nauseous! (I went to the theatre in that condition, so we couldn’t go by me.) And she’s a hearty non-complainer.

Mr. X wondered why it was all close-ups. He saw it on his laptop (that’s what SAG set-up for us,) and he thought that maybe his screen was cutting-off the real frame. But no. Then he thought maybe it was to not show Natalie’s dancing. (He didn’t know she was the real dancer for awhile.) But when they did show her whole body, he was unbelievably impressed, as were we all.

And, as a college film student, I understand the lack of color, but it was truly annoying. I know I could write a term paper on it and get at least an A-, but that doesn’t make me enjoy the design now.

In regards to the actual story, it wasn’t clear throughout as to what was real or imagined by the lead character. I thought it was going to turn-out that her mother was a figment of her imagination, and I was hoping for some kind-of M. Night Shyamalan ending, not a Gloria Swanson one.

As for the performances, I just don’t get the kudos and nominations for Natalie Portman, lovely though she may be. If it’s because we’re all impressed that an actress can toe dance so well, I understand a tad. That’s like when Jennifer Hudson won everything for her great singing in Dreamgirls, although it should have been her acting that got judged. 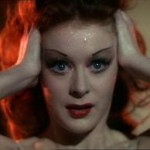 But Natalie’s acting was all on one level–looking worried. I had no idea what she was trying to portray. I just kept thinking how wonderful the ethereal Moira Shearer would have been in the role had it been made in the late ’40s. And then the scary Robert Helpmann could have played the evil ballet master, and I would have understood the whole thing. [Note: pic to the left is of the unparalled Moria Shearer in The Red Shoes.  Now, that’s how you portray a ballerina going mad!]

And I’m sure Natalie will win the Oscar just because everyone’s on her bandwagon. Actually, no lead actress blew me away this year, although, so far, Nicole Kidman (Rabbit Hole) was the best. Everyone seems to love Michelle Williams, too, but I don’t know if it’s her acting or her personal story of tragedy, losing her baby daddy, Heath Ledger, at such a young age. While she was excellent in Blue Valentine, Ryan Gosling was the absolute better of the pair, and he’s gotten little love anywhere, save for a Globe nod and some lesser award nominations! Shame.

One last note on Black Swan: I’m so relieved that that Mila chick wasn’t nominated for a supporting Oscar! (Too lazy to look up her last name, but you know who I mean.) While she was okay, there was nothing special about her performance. It’s a mystery to me why she received a SAG nod. She must have an awful lot of actor friends for that to have happened. So, I’d like to thank the Academy for not nominating her! Kudos. 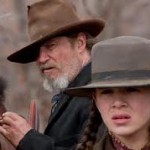 But I’d like to not thank them for nominating Jeff Bridges for True Grit! What were they thinking??? They were either tripping or maybe they’re remembering the shocking win for John Wayne in the original, and that’s influencing them. No matter their reasoning, I’m just scratching my head over this one.

Only about an eighth of what he uttered could be understood, and none of that was special. It’s a travesty that he was nominated and Ryan Gosling (Blue Valentine) wasn’t. Even Mark Wahlberg (The Fighter) would have been a better choice. This is really upsetting me. Thank goodness Javier Bardem was (for Biutiful) or I would have led a protest.

I guess the academy didn’t feel that the other four nominations really mattered this year because Colin Firth (The King’s Speech) is a lock to win. (If it were up to me, Javier would win, but I’m fine with Colin getting his first, that he deserved for A Single Man last year.)

And how did Hailee Steinfeld, who played the young girl, get nominated at all, let alone for Supporting Actress??? She was in just about ever frame of the film!!! They put in some inexplicable, long (or did it just seem that way?) scene nearish the beginning for Jeff Bridges, I think just so that they could say that he was the star of the film, and not this young girl.

And she was so annoying! She looked and talked just like Gary Coleman. Think about it for a second. Always leading with her big lips. I thought she was awful. Even more so that the actual film, if that’s even possible. The whole shebang is just dreadful. If there had not been so much gunfire, I could at least have taken a good nap during the screening. My friend kept asking if we should leave, but I always try to stay till the end, just in case it gets good. No such luck on this one. 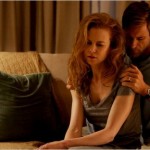 I had to watch 127 Hours next to bring the room up a little.