I wasn’t planning to review any movies this year, but I’m so ticked-off that I wasted even a nano-second on the awful and confusing Licorice Pizza that I had to warn you guys off it. And once I got going, I realized I may as well review all of the awards-eligible films I’ve seen so far, which includes just about all of the Oscars-nominated ones.

I would have never chosen to see most of them out of the blue, but since I vote for the SAG Awards, I always feel it’s not fair to vote without seeing all of the nominated performances. 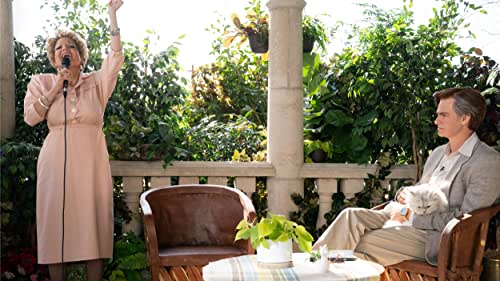 The Eyes of Tammy Faye.

And three of the four movie actors for whom I voted—Troy Kotsur, Jessica Chastain, and Will Smith—won!!! I really didn’t think my fellow SAG members would be smart enough to vote for the correct performances, after the Nominating Committee came up with so many questionable choices, such as Bradley Cooper for Licorice Pizza! Are you kidding me?! So I was thrilled that the membership, in general, was wiser than that small committee.

As usual, I wasted a lot of my time on most of these films; this year’s crop is particularly dull and just plain old boring. I loved only two, (Belfast and Coda,) I hated the aforementioned Licorice Pizza, and I found some others to be okay enough. Here they all are: 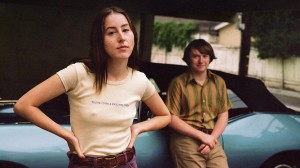 Licorice Pizza—There’s so much to say about this awful film that it merits its own article! So look for it in this e-zine very soon. But here’s a small taste of what I thought of it: There’s zero chemistry between the two leads. The movie shows absolutely no reason why the teen-ager would be obsessed with the older girl. And how is any form of pedophilia ever amusing??? (If you didn’t see this waste-of-time film, you’ll have to wait for my upcoming full review to understand how that’s applicable here.) 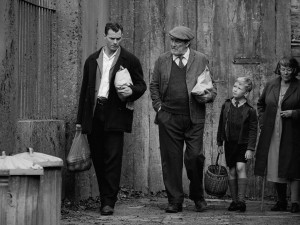 Belfast—If it was up to me, this wonderful film would win absolutely everything! The little boy, Jude Hill, is brilliant, the grandparents (Ciaran Hinds and Judi Dench) provide an acting clinic, the story is gut-wrenching while still being amusing and downright human, and everyone else in it, (obviously especially Caitríona Balfe and Jamie Dornan,) is wonderful, as well. And it’s a pleasure to hear so many authentic Irish accents. Well done all around, Kenneth Branagh! 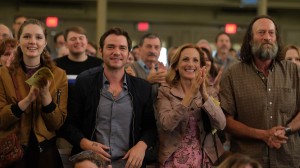 Coda—For some reason, Mr. X and I both weren’t drawn to seeing this film. But, OMG—are we glad we did! Mr. X wanted to see it again right away! Marlee Matlin and Troy Kotsur are perfect, and Emilia Jones, who plays the hearing child of deaf parents, (hence CODA,) actually learned to sign and sing for the part! How amazing is that?! There may be one tiny hole, though—I think the government can assign a hearing person to help deaf families who can’t afford that aid on their own. I’m not positive, but pretty sure. 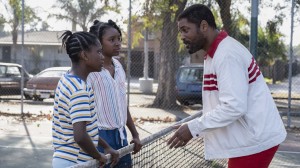 King Richard—I can’t believe I’m saying this, because I’m so not a fan of Will Smith and his weirdo family, but he’s who I voted for for Best Actor. And he won! I really didn’t see himself in his portrayal, which is wonderful. I really saw only Richard Williams, the father and driving force behind the success of tennis’ Williams sisters, who this film made me finally understand a bit.

I have had nothing but disdain for Richard Williams for all these years, because of how obnoxious he’s acted at his daughters’ tennis tournaments, but now I see why he did all that; to get his family out of the ‘hood. You’ve got to respect that. But I’m now more sure than ever that he orchestrated Venus and Serena’s matches against each other. He planned-out everything else about their athletic careers, so I’m convinced he told them when to beat each other, as well. 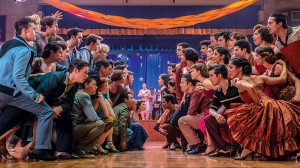 West Side Story—Why anyone would remake one of the most classic films of all time is beyond me. This new version of the iconic musical is okay enough, though sort-of soulless. No one can hold a candle to original stars, (and Oscar winners,) George Chakiris and Rita Moreno in the performance category, nor the timeless beauty and pain of Natalie Wood. And the dancing in the original movie was a zillion times better than in this one. I don’t know if the new choreographer told the dancers to not stretch their lines all the way, to look like regular people, but it all left Mr. X and me kind-of cold.

And a lot of the casting is head-scratching. The leader of the white gang, the Jets, is played here by Mike Faist, who could not be more wrong for the part of a gang leader! I’m sorry to say this, but his wimpy talking voice is like nails on a chalkboard. What was Steven Spielberg thinking???

And the changes made to the story, such as that Anita and Bernardo live together, that Chico isn’t part of the Sharks gang, and that Tony had been in jail for beating a kid, were beyond unnecessary. Thank goodness it was a box office flop because it would be a shame if this is the only West Side Story seen by a new generation. 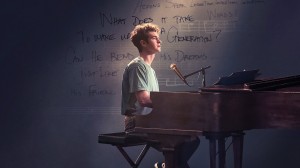 But the music is always wonderful, so there’s that.

Tick, Tick…Boom—The only good thing about this whole shebang is Andrew Garfield’s singing. It’s shocking that he just learned to sing for this confusing film! (I had seen a stage version of this show about a decade ago, and remember intensely disliking it then, too.) 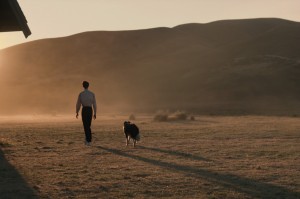 The Power of the Dog.

The Power of the Dog—I could spend all year pondering it, but I will never understand the success of this film. I also didn’t understand the movie itself! I had no idea what was going on in the story, ever—even with my 147IQ, after I saw it, I had to research what was going on. And what we see on-screen doesn’t jibe with what it was trying to portray, according to the novel it’s based on.

How any of the cast got nominations, let alone all four principals, is beyond me. Mr. X feels even more strongly about it than I do. Perhaps the worst offense is how wrong for the main cowboy role Benedict Cumberbatch is. If you’re planning to see it, a) definitely find-out the narrative first, and b) have a pillow and blanket handy because it’s a snoozer. 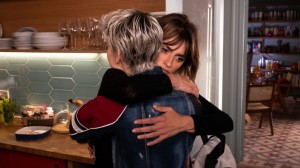 The Eyes of Tammy Faye—I have never been a fan of Jessica Chastain. I can’t put my finger on it; I just haven’t. But she’s just about perfect in this film! I voted for her and she won. I never knew the whole story of the Bakkers, so if this is the true one, it’s pretty interesting.

Parallel Mothers—This is just a sad story, with no obvious conclusion. But Penelope Cruz can do no wrong for me. However, her character becoming a lesbian out of nowhere is sort-of jarring. 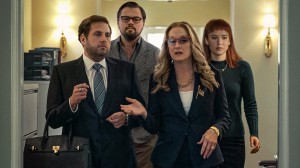 Don’t Look Up—I started my awards-films-watching this year with this one, only because Mr. X wanted to see it first. I adore Leonardo, (as I’m sure many of you know by now,) I’m a major Meryl Streep fan, and I enjoyed a few laughs here and there along the way. And even though I saw the parallels to the global warming situation, this movie didn’t do much for me. Sorry to admit that, but I have to be honest. 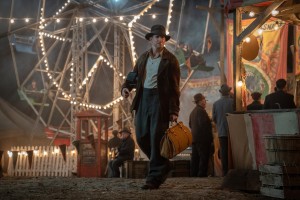 Nightmare Alley—This aptly named film is a nightmare! Why would anyone possibly do a remake of this horrible movie to begin with??? Mr. X and I have actually been watching the original 1947 Tyrone Power vehicle for about a year now—the story is so abhorrent that we just can’t get through it all, ever. So when this title popped-up in the news again last year, I hoped that they were just using the same name. But no such luck. And this one is so much more gruesome than the original. Of course.

Perhaps Bradley Cooper wanted to do it because Power deemed it the best work of his life. Cooper should not feel the same way about his work here.

And even though most of the visuals are somewhat stunning, the story is quite the opposite. So my advice is to stay away. Far away! 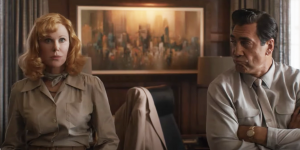 Being the Ricardos—I know that Nicole Kidman is a good actress, but I just did not see Lucille Ball much in her portrayal. Trust me, I know it’s a hard one. I had to play a Lucy impressionist in a sitcom once, and I asked why they didn’t just hire a real impressionist for the gig. And to a person, the rest of the impressionists in the cast told me that “no one will touch Lucy!” Maybe they should have told that to Nicole before she began. The only part of this movie I really liked at all was Javier Bardem, whom I adore, belting-out Babloo as Desi Arnaz! 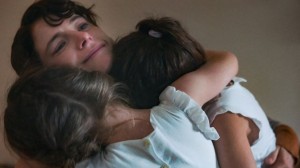 The Lost Daughter—This could be re-titled The Lost Viewers, because that’s what Mr. X and I were about this tale—lost. He actually gave-up less than halfway through. And now I’m jealous of his foresight. What was the purpose of it all? Early on, I told him I was blaming Maggie Gyllenhaal, the director, for wasting my time. And he quipped back, “Why? She didn’t write it!” But it turns-out, yes, she did. She adapted it from some pseudonymous Italian novel; I can understand why the author did not want to be known! 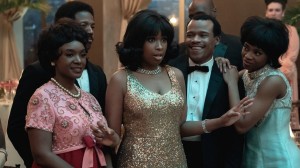 Respect—There’s no denying that Jennifer Hudson is a fabulous singer. But I’m glad she didn’t get an Oscar nod because there was absolutely not even a hint of Aretha Franklin in her portrayal of the music icon, she’s always just JHud.

The whole movie is a bit of a mess, actually, ignoring Aretha’s first pregnancy—at twelve!–her second at fifteen, and her marriage to actor Glynn Turman. I only hope that Cynthia Erivo and the writers on the TV bio of Franklin (which I have yet to see) did better.

Dune—If you like beautiful wide shots of sand, and a super-boring tale, this is your film. Also, if you’re in need of some shut-eye. [Note: In case all that sand in the pic at the top of this page idoesn’t make it obvious, it’s a shot from Dune.] 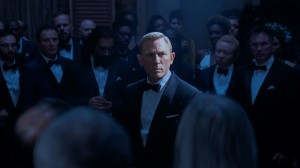 No Time To Die.

No Time To Die—I haven’t seen a James Bond film since Pierce Brosnan played him in the previous century, partly because Daniel Craig’s not-great looks don’t cut it for me as the classic ladies’ man, but I broke down and watched this one. It was just okay, waaaay too long, and sort-of confusing. What does that ending mean for the franchise??? But I’m not judging if it’s your thing. 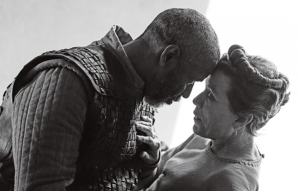 The Tragedy of Macbeth.

The Tragedy of Macbeth—I’m sorry to say that I lasted only about ten minutes with this one. As stylized as it appeared, there’s just not enough time in my life for Shakespeare. Everyone else can pretend to be a fan, but you know I always speak only the truth.

Whew! That’s definitely enough for now, don’t you think? But remember to keep an eye out for my full, and very negative, review of Licorice Pizza in the next two weeks. And then on to the Oscars, to see which Academy voters agree with me!