Trending
You are at:Home»EVENTS»MOVIE REVIEW/EVENT: A CLASSY BROAD
By Karen Salkin on April 18, 2018 · EVENTS, MOVIE REVIEWS

I have to thank the organization Greenlight Women for introducing me (figuratively and literally) to the miraculous subject of this documentary, Marcia Nasatir. I’m not a Greenlight member, (because you have to be over forty to join, and we all know that I’m still seventeen,) so I was especially happy to be invited to a special event they hosted recently. It was a screening of the film, A Classy Broad, preceded by a light buffet luncheon. 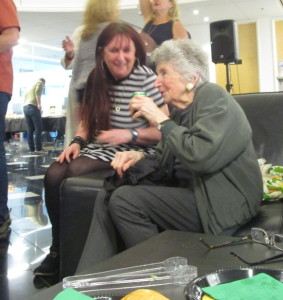 Karen Salkin (who’s a tad blurry because she’s in motion) and Marcia Nasatir, sharing a giggle. Photo by Flo Selfman.

During the very mingle-y lunch portion of the afternoon, one of the people who was sitting in my area was introduced as Marcia Nasatir. Since this wasn’t an event I was asked to write about, I had not done any pre-event research, so I had no idea that this lady was the very subject of the film we were there to see! I just went over to ask her if she was related to a certain fan of my former television show. (They have the same unusual last name.) Somehow, that led to us discussing how all the females in her family can do more handyman work than their men, while my mother and I perfected the art of doing nothing. (I even told her how I “Tom Sawyer” Mr. X into doing my laundry, and more, all the time, not knowing at the time that she’s working on developing a new Huckleberry Finn film!!! Most people have no idea what I’m talking about when I speak of “Tom Sawyer-ing” someone, so that she giggled when I said it was refreshing.) 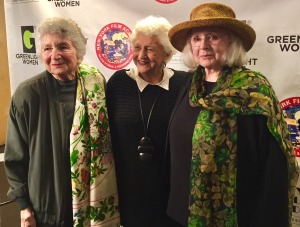 But I was still in the dark as to who she is! Until we went into the screening room and saw this film, that is. Iconic actress Piper Laurie introduced it, and when she said that Marcia had resurrected her (Piper’s) career by recommending her for the classic horror film, Carrie, I wondered just how and why Marcia had done that. Turns-out, she helped everybody she could! (You’re just going to have to see A Classy Broad for yourselves to find-out just how much she’s done for everyone over the course of her uber-long career!)

From her beginning career at Bantam books, (a place I had a glancing association with as a teen-ager, actually—I still have a bunch of paperbacks from those times,) she segued into film-making, culminating with becoming the first female vice president of United Artists! Actually, it appeared to me that Marcia was the first female everything! Her story is truly amazing. 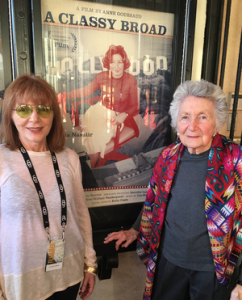 This documentary was made by Marcia’s neighbor and good friend, filmmaker Anne Goursaud. What a fortuitous friendship they’ve forged! At just about ninety-two years of age, (which she’ll turn in a few weeks—but, unlike the rest of us, who round our ages down, often quite a bit, she rounds up!–how’s that for secure?!,) Marcia does not seem to be slowing down. And Anne has been right there for the past few years, capturing it all. I still cannot believe how much this one woman has accomplished in her life, especially at a time when women’s brain power was pooh-poohed! My mother would be about the same age as Marcia now, and growing up, I was made to feel like my mother wasn’t normal because she was a teacher, so therefore my nanny (and best friend) had to come see me star in school plays, take me to Girl Scout meetings, sew my dance costumes, and stuff like that. Instead of revering my mother for her brain, (as I always did,) many people around us seemed to be a bit frightened of her.

Actually, even when I started-out in show biz, doing my TV show, Karen’s Restaurant Revue, I was always the only girl called in for certain commercial auditions along with the male comedians! I knew I wouldn’t get the job over a guy, but the casting directors told me that they wanted to give me the chance because I was the only funny girl around! It was lonely. And not fun, getting the evil eye from all the men who did not want me there, competing with them. So I can really empathize with what Marcia must have gone through. (Only her journey was a zillion times harder in those days! And she did come out on top. You go, girl!) 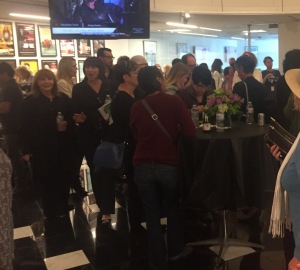 Some of the Greenlight Women mingling during the luncheon. Photo by Karen Salkin.

As fabulous as everything about Ms. Nasatir is, I was most impressed with her take on being kind, especially because I had just written an essay on that very topic, (which you can still read here: itsnotaboutme.tv/news/karens-rants-kindness-should-be-normal,) along with a companion video elaborating on the concept, (which you can, and should, watch here: www.youtube.com/watch?v=mon4s6dE7TU.) On helping people, Marcia says, “Why not do it? What does it cost you to be nice, if you can help someone?” But I have news for her—very few people seem to have gotten that memo. So I really applaud her attitude, which I wish would be the norm.

Another thing we agree on is this quote of hers: “Nothing will happen if you don’t get out of your own house.” That’s what I always say!!! Mainly to homebody Mr. X, but everyone should learn from it. Believe it or not, sometimes even bon vivette moi has to push myself to get out of my cozy home to go to one more event. But then I tell myself basically those exact words that Marcia uses!

Now, if only I could find her recipe for her candied pecans that my mouth has been watering for since seeing them in A Classy Broad, (which is an apt description of Marcia,) I’d be all set! 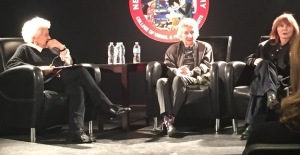 After the wonderful film, which flew by, we were treated to a lengthy Q-and-A with Marcia and Anne, moderated by no-nonsense Brit, Marion Rosenberg, who’s an accomplished film producer herself, and one of the co-founders of Greenlight Women. (When I was little, I named every single doll I had, even my hobby horse, “Marion,” so I was happy to finally meet a real person with that moniker! Now I want to have afternoon tea with her!) That discussion was enlightening because A Classy Broad was made a few years ago, and so much has happened in the world of the show business battle of the sexes. There was so much more to discuss! (And we did.)

Marcia’s motto is “Done. Next.” I’m going to try to adopt it now, because mine is, “Am I really done?,” and I continue to worry about what I just did, even as I move to my next project.

So, I’ll finally try her philosophy now. Okay, I’m done writing this column, and will move on to the next, (which it turns-out, will also be about a Jewish show biz icon! But you’ll have to read it for yourself to find-out who it is.) But before you move on, I heavily suggest you find A Classy Broad and see it for yourself. There’s something for everyone in there!!!