Young Adult premieres in Los Angeles tomorrow, so I figure I’ll get a jump on the reviews now, if I can save even one person the price of admission. I feel that films at this time of year should be upbeat and fun, not slow and depressing.

I’m not really a fan of Jason Reitman to begin with since for his film last year, Up In The Air, he hired out-of-work regular people instead of out-of-work actors, and then bragged about it at an industry screening I attended. [Read about it here: www.itsnotaboutme.tv/news/2010/01/08/475/ ] But I can be fair about someone’s work, which I am in this case.

And, let me tell you, his new film, Young Adult, is basically pretty boring. It’s only an hour and a half, and I had to take wake-up pills in the middle of it to get through the rest. (No worries—they’re only Ultra Energy vitamins. No biggie.)

In addition to being boring, it’s depressing. And slow. There are a few laughs in it, but only about every nine minutes. The pal who accompanied me to the screening was one of my best audience members during the run of my show, Karen’s Restaurant Revue, because she laughs so easily, and often. And during this film, all she could muster was a few chuckles. And no guffaws.

I should sue them over the tagline: “Everyone gets old. Not everyone grows up.” That’s the story of my life! But not really the story of this depressing mess. (Have I mentioned it’s depressing??) It’s a depressing premise, all the way around. I never tell anyone what a film’s about, to not ruin it for anyone, but I don’t think it matters in this case because it’s in all the trailers and promos. Charlize Theron plays a thirty-seven-year-old who decides she wants her high school, hick town boyfriend back when she finds out that he and his wife had a baby. It’s supposed to be a comedy, I think, but I was sad the whole time. 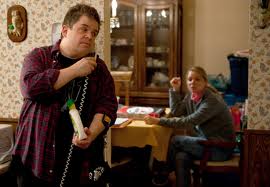 The little guy who played the poor guy from high school, which was basically just a device to let her tell us, the audience, what she was thinking, was the best part of the film. I had never heard of the actor before, Patton Oswalt, but I’ve since researched him, (of course,) and he’s worked a lot, so perhaps many of you are familiar with him, which is as it should be.

I hate Jason Reitman’s directing style, in his other films as well. No one talks like that in real life, in one sentence at a time, with pauses in between.

And the end was really stupid; there was no resolution, which would have been okay if the journey had been more interesting. I just expected so much more from the team (writer, director, producers) who bought us the entertaining Juno. I actually spent a moment wondering if Jason hired actors this time, or if he felt that he needed small-town folks to fill out the cast in this film, too. 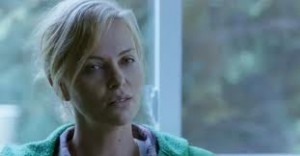 Maybe it will be a success because people always want to see the still-beautiful Charlize, (and because of the schadenfreude that comes with seeing a good-looking person be miserable,) but that’s about it. On that topic, I was actually surprised to realize that she’s just a regular pretty girl, and not as stunning as we see with the right make-up and lighting. She’s still better than most of the rest of us, but not as stunning as, at least I, originally thought.

I’d suggest you just wait to see this one on an airplane, which I feel will be soon.