I had to force myself to watch Warrior, and did so only because I think it’s not fair to vote for the various acting awards if you haven’t seen all the performances that are nominated. (In my case, it’s the SAG Awards.) So, I saved it for last because I knew it was long. And the basic topic was mixed martial arts. Ugh. 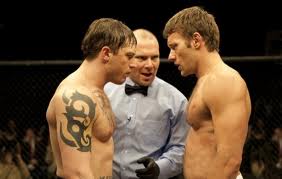 I’m ashamed of my fellow actors that the cast was not nominated for the SAG Ensemble award. What’s wrong with those people? They had to have seen the movie because they were wise enough to nominate Nick Nolte for Best Supporting Actor, (which he’s also nominated for at the Oscars,) so how about the rest of the guys? I have to just surmise that MMA is just not a popular subject among show biz folk, and maybe they just fast-forwarded to Nick’s scenes.

In my opinion, as brilliant as Max Von Sydow and Christopher Plummer were in their respective films this year, (and always,) Nick Nolte deserves to win the Oscar. But I’m sure he won’t because all those voters are sheep, and voting for Christopher is what’s “in” this year. (I’d love to see a movie with Nick and Meryl Streep, another one who deserves the victory, for The Iron Lady, but will lose to probably Viola Davis or Michelle Williams, because they’re popular right now, too.)

In addition to Nick, Warrior has the best casting ever! Randy Hiller did an excellent job. (And, no, I don’t know her. Or him. I obviously don’t know anything about that casting director, so this is not a personal thing.) The two lead dudes, Tom Hardy and Joel Edgerton, were perfect. And, I found-out later, not even American! How did they find two guys, who could definitely be brothers, who can act this well, and be in such great shape??? Especially Tom. You have to see the muscles on that guy!

Even usually-awful Jennifer Morrison was good! It’s also the only time I’ve ever seen her even blend-in with a cast. She was absolutely dreadful on House, and is just about ruining Once Upon A Time, which is already bad enough. (Why do I even bother watching that show, if that’s the case, you might ask? Because Sunday nights are not exactly populated with shows I enjoy, and I’m a primetime network TV addict.) (First time I’ve admitted that out loud! Wow. Just like I said earlier about this film!) But she was effective here as the wife of one of the brothers. I was amazed. [Note: She wasn’t amazing—I was just amazed that she was finally good in something.]

The whole movie was just so intense; I actually felt like I was going to throw-up for the last twenty-four minutes of it. And, I cried my guts out during that emotional time. (Unlike yesterday’s film, whose review you can read here: www.itsnotaboutme.tv/news/2012/02/22/movie-review-extemely-loud-incredibly-close. I said then that sports just might be the ticket to jerking some tears from me, so I guess I was correct.)

The fight choreography was astounding. I’m just glad I didn’t see it on a big screen because I don’t think I could have handled those life-like scenes. (Hey—maybe that’s why the cast wasn’t nominated—the audience members had their hands over their faces for much of the film!!! I really just realized that this very instant, but I think I’m on to something.)

So, don’t eat a lot of snacks during Warrior, but definitely see it. And bring tissues and a barf bag. Don’t say I didn’t warn you.