I don’t have much to say about The Sessions. It is what is. It’s heart-breaking and uplifting at the same time, with a little humor, and a lot of nudity, thrown-in.

Even though star John Hawkes was his usual excellent self, the only nomination went to supporting actress Helen Hunt, who did all the nudity. (She’s was naked for ninety-eight percent of the role—she deserves the nod for that alone!!! I can’t do that in my own house, even when I’m alone!)

The Sessions is the true story of a man who’s been disabled by polio for most of his life, having sex for the first time. He can’t move anything from the neck down, although he has feeling everywhere, and has to sleep in an iron lung. But he has an amazing attitude and is a journalist. And a virgin. 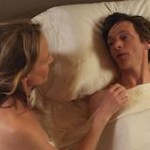 Mark O’Brien wrote of his sessions with a sex therapist, and this is the story. Very sadly, he passed away in 1999 at the young age of forty-nine. (You should research him if you have time—it’s an interesting story.)

Even though John Hawkes has been working in the biz for close to three decades, I just became aware of him a couple of years ago when he was in Winter’s Bone, Jennifer Lawrence’s first big film. He played a creepy guy in it, as I have a feeling he always does. So, this is a departure for him, and he was excellent. I became a semi-fan of his back then, but I’ve been re-thinking that status since last Fall, when we were seated next to each other, by chance, at the lovely Media Access Awards breakfast.

As much as I hate sitting with strangers, I was looking forward to complimenting him on his previous work. But, when he arrived with his crass, un-charming PR woman, I was appalled by her behavior. After I greeted her warmly, (we used to know each other pretty well, back when I was the town’s “It” girl, and everyone wanted to be my friend…and I let them!,) she very loudly demanded to know, in front of the assemblage including a casting woman I had read for once upon a time, “What are you doing here?” I was mortified, and explained that’s where the powers-that-be had seated me, and I’d be happy to check with them again to see if they could seat me elsewhere. And John just stood by and didn’t offer even a slight apology to me, who was obliviously mortified. So, I’m holding that against him.

Speaking of the younger happening me, I had accepted a major PR firm’s generous offer to represent me back then. Even though I was a newbie to the biz, I was horrified when my rep was rude to people at a telethon I was doing. I worked-up courage to call the head of the firm and ask to be placed with someone else because I didn’t want to be associated with rude-ness, especially when it looks like it’s on my behalf. He said he couldn’t do that. So, I chose to leave what was an incredible deal for me, one that would have worked wonders for my new-found celebrity, rather than stay and be represented by someone so rude. So, to have a grown man accept that behavior from his rep is not acceptable to me. I just can’t look at John Hawkes the same way as before, even though he wasn’t the perpetrator of the rudeness to me.

How do you like my review of the film? Good, eh?

I know I got off-track, but that little anecdote just flew from my fingers to the page, and I couldn’t stop them. (Conversely, I traversed the country by several planes with Helen Hunt once, and she was a basic nice, unpretentious girl, even though she was sort-of famous at the time and I was far from it. But that’s a story for another time. Okay, I know this John Hawkes one was, too, but them’s the breaks.)

But I have nothing else to say about the movie. It’s good, not great, kind-of educational, with excellent performances. Nothing to rush out and see, but interesting enough if you come across it on TV.